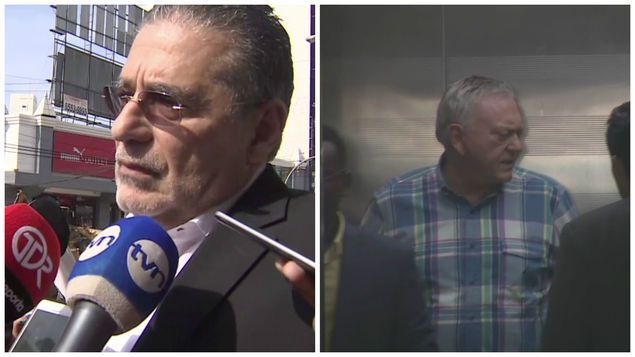 The order issued by a German prosecutor's office to detain the owners of a Panamanian law firm abroad at the center of a tax haven scandal faces an insurmountable obstacle in Panama: the Central American country cannot extradite them in the case of being detained internally.
While authorities remain silent after reporting from Germany on Tuesday that Jürgen Mossack and Ramón Fonseca are being sought to answer for accusations of forming a criminal organization and complicity in tax evasion, legal experts consulted said Wednesday that both lawyers are protected by law.

"They have constitutional protection," Alvin Weeden, a veteran Panamanian lawyer graduated from the University of Miami, told The Associated Press. "Technically, there is no possibility," he stressed, referring to the fact that Panama's Magna Carta prohibits the extradition of its nationals without exceptions.

Both have also been prevented from leaving the country since April 2017 due to the fact that they face proceedings in the courts in a case for allegedly helping to create a company to hide money from the Brazilian Odebrecht destined to pay bribes, as well as the repercussions of the Panama Papers .

Meanwhile, it is not yet clear what consequences the accusations in Germany would have against these two lawyers in Panama, where only at the beginning of 2019 a law was put into effect to punish tax evasion. The press office of the Judicial Branch said that power does not usually comment on ongoing investigations in other jurisdictions, while Interpol-Panama did not immediately respond to whether it received any alerts from its German counterparts.

The leak of 11 million secret financial documents from the Mossack-Fonseca law firm in 2016 - the so-called Panama Papers - hit the image of the Central American country and exposed how some of the richest people in the world hide their money. The records were first leaked to the Suddeutsche Zeitung, and shared with the International Consortium of Investigative Journalists, which began publishing reports in collaboration with the media in 2016. The repercussions of the leaks were far-reaching.

Mossack and Fonseca were quick to come to their defense. They noted in a statement that his office had sold corporations to a German bank, which subsequently resold them to businessmen for tax purposes. The document ensured that his office was not involved in such subsequent transactions.

"If any of these final beneficiaries (businessmen) is presumed to have evaded the payment of taxes in their country, or it is presumed that they committed some other type of crime using a company created by us, that was totally beyond our control and knowledge," they explained in the statement sent Tuesday night by his lawyer in Panama, Guillermina McDonald, to the AP. "We follow all the processes required by the regulators of our industry at the time."

They said they are ready to continue collaborating with investigations anywhere in the world, although McDonald's lawyer said she did not know if her clients would be willing to appear before the German authorities.

"Behind all this is the urge to pursue fiscal problems," estimated Weeden. The European Union re-included Panama on a list of nations with tax havens in February.

Mossack and Fonseca argue in their statement that everything is part of the continuation of the "attacks of discredit" by the EU against the country, although some experts disagree somewhat.

"I think that many lawyers in Panama and elsewhere, such as Mossack and Fonseca, have been playing, walking on a very thin thread," said attorney Guillermo Cochez, a harsh critic of the practice of creating offshore or extraterritorial companies.

“They say it is not a crime, but I have another impression. In the case of Mossack and Fonseca, they went so far as to create partnerships that served to hide the sale of weapons to North Korea and Syria, ”added Cochez, who was Panama's ambassador to the OAS. "That that I sold a company and did not participate in anything, that is a very difficult story to believe."

Mossack and Fonseca announced the closure of their offices in Panama and the world in March 2018.
Add Comment