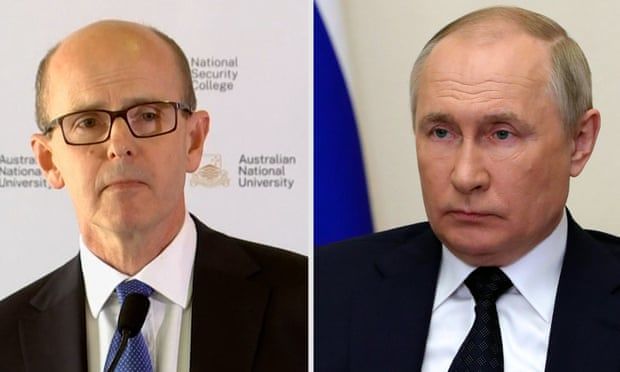 Vladimir Putin has made strategic errors in his pursuit of the war in Ukraine partly because there are so few restraints on his leadership, the head of the British spy agency GCHQ will say in a speech on Tuesday.

Russia’s soldiers are running out of supplies and munitions and initial gains made by Moscow are being reversed, Jeremy Fleming is expected to add in a rare public address.

“Far from the inevitable Russian military victory that their propaganda machine spouted, it’s clear that Ukraine’s courageous action on the battlefield and in cyberspace is turning the tide,” Fleming will say.

Focusing on the Russian president directly, Fleming is expected to say that “with little effective internal challenge, his decision-making has proved flawed” and that he has engaged in “a high-stakes strategy that is leading to strategic errors in judgment”.

On Monday, Moscow launched a wave of missile strikes aimed at Kyiv and other major urban centres, killing at least 11 people, which Putin said was in response to the weekend bombing of the bridge connecting occupied Crimea to Russia.

Western intelligence has repeatedly emphasised how it believes that Putin has micromanaged the conduct of Russian forces in the seven-month-long war. Last month US officials said it was thought the president had rejected a request from his generals to retreat from the city of Kherson on the west of the Dnieper River.

But although intelligence officials believe there is increasing anxiety within the Kremlin at the progress of the war, Putin’s position is thought to remain strong. In the unlikely event he was to be suddenly replaced it is not certain it would result in a significant change in Russian strategy, either.

The GCHQ director will highlight the costs to Russia from the months of fighting, arguing that Moscow’s forces have become exhausted and its recent mobilisation of conscripts shows signs of desperation. “We know – and Russian commanders on the ground know – that their supplies and munitions are running out,” he will add.

Fleming is also expected to speak about the future threat posed by China, according to a pre-released extract of the remarks he will make in front of a specialist audience at the Rusi thinktank on Tuesday afternoon.

Beijing’s efforts to exploit the control and surveillance capabilities in emerging technologies represents “a threat to us all” that must be tackled by concerted western action, Fleming will say, reflecting a widely held intelligence view that it is China rather than Russia that is the long-term challenger to the west.

Characterising the situation as “a sliding doors moment in our history”, Fleming warned that in particular China was seeking to control or influence technologies such as satellite systems and digital currencies in line with its authoritarian politics and, where possible, spread them internationally.

Beijing has been seeking to launch a central bank digital currency in an attempt to boost the use of the yuan in international transactions. But Fleming said it could be used to allow China to “partially evade the sort of international sanctions currently being applied to Putin’s regime in Russia” if Beijing were to attempt to invade Taiwan.

The spy chief also highlighted China’s promotion of its own BeiDou satellite navigation system, an alternative to the US GPS and the EU’s Galileo.

“Many believe that China is building a powerful anti-satellite capability, with a doctrine of denying other nations access to space in the event of a conflict,” Fleming will say, adding: “There are fears the technology could be used to track individuals.”