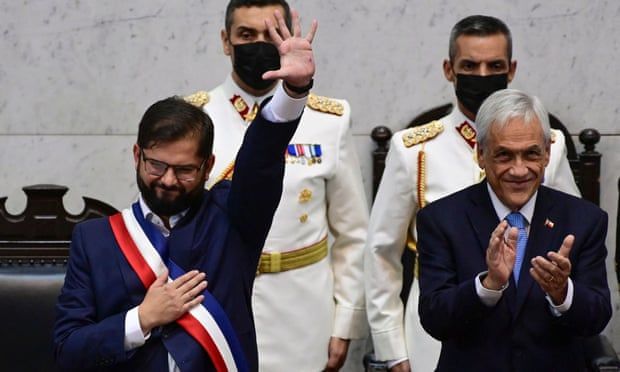 Gabriel Boric, 36, sworn in as president to herald new era for Chile

After a dizzying rise from student protest leader to head of state in just over a decade, Gabriel Boric has been sworn in as Chile’s youngest ever president.

“Know that we are going to do our best to rise to the challenges we face as a country,” he said as he received the presidential sash at a ceremony in the port city of Valparaíso.

A month on from his 36th birthday, Boric was flanked by several of the student leaders who served alongside him through two terms in congress and are now joining his cabinet.

“This is the best generation of young politicians Chile has had in 50 years,” says Luis Maira, 81, a former minister who was a mentor for the new president. “Without a shadow of a doubt, Boric is leading us into a new chapter of Chilean history.”

Chile was rocked by months of unrest in 2019 over inequality, corruption and inadequate social welfare. Many of the protesters’ demands echoed those which Boric and his contemporaries had pushed in a student movement which demanded that Chile be rebuilt with the concerns of its people at the core.

It is a vision that Boric has vowed to achieve as president – although a divided congress will probably hamper progress.

In the background, representatives from every corner of Chile are drafting a new constitution to replace Gen Augusto Pinochet’s 1980 charter. The new constitution will be put to a referendum later this year.

The new government will also have to negotiate heightened tensions between the state and indigenous Mapuche in the south, and a migration crisis in the north.

Boric makes a point of insisting that history does not begin with his generation, but there is no denying their impact on politics.

“He always wanted to know where those who held power came from and what they had done before,” said Maira. 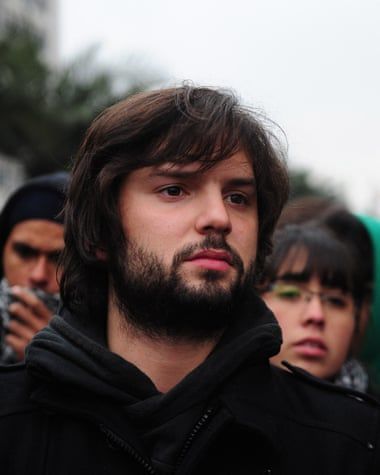 Gabriel Boric, then a student leader, took part in a march in Santiago in 2012 to demand that President Sebastián Piñera’s government overhaul the education system.

In the winter of 2011, Boric and his contemporaries paralysed Santiago with their movement demanding free, high-quality education for all, catapulting them into the national consciousness.

A year later, Boric took the reins at the University of Chile’s student union in the centre of the capital, where bright swirls of colour now adorn a building once occupied by Pinochet’s feared secret police.

“He always had something about him, and when he put himself forward for congress I joked that he might become president,” remembered Sonia Moreno, 59, who has worked at the union for more than a decade.

As she flicked through pictures of her and a long-haired Boric on her phone, she recalled how he pushed her to finish her schooling and even helped raise money for an operation on her arm.

“I have so much faith in him because he’s a warrior – he does what he says. He has a strong character and he’s determined,” she said.

In 2013, Boric was elected to Chile’s congress representing Magallanes, Chile’s southernmost region, vowing to change Chile from the bottom up.

Those around him paint a picture of a voracious reader and patient negotiator, determined to collect opinions, bridge political divisions and build majorities.

Boric has repeatedly said that as part of his ambition to decentralise Chile, he hopes to leave the presidency with less power than when he inherited it.

He has also been careful to signpost the changing of the times with his early choices.

Boric reiterated his backing for Chile’s constitutional process the morning after the election, and last month announced a female-majority cabinet – a symbol of the feminist Chile he is looking to build.

He will live downtown in Barrio Yungay, where eclectic rows of low-rise homes and graffitied facades line cobbled streets – a far cry from the outgoing president, the billionaire Sebastián Piñera, who has a large house in Santiago’s affluent north-eastern suburbs.

The home Boric has chosen sits between streets named Freedom and Hope.

“If Boric is able to oversee the transition from one constitution to another, and from one generation to the next, then I would consider that a success,” said Maira.

“If he can do that, then the effects will be felt across Latin America, as he could be remembered as the leader of a new era in a region that has rarely found consensus.”