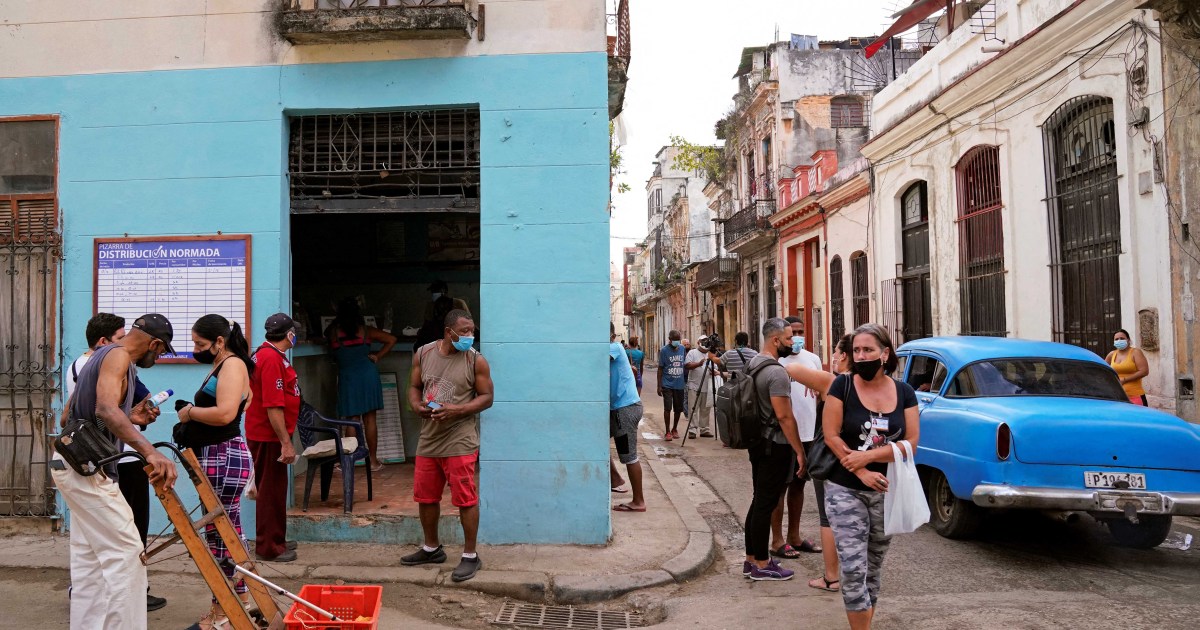 From Havana with love

Sixty years of US embargo on Cuba have not starved the island into ‘democratisation’, the way Washington hoped.

As I was preparing to travel from Mexico to Cuba in early February for a one-month stay, a Cuban friend in Havana messaged me with some tips. If you are going to need things like milk and coffee, he said, be sure to bring them with you.

Indeed, as Cuba now marks six decades of existence under United States embargo, basic commodities are hard to come by – and that is just one aspect of the ongoing US policy of making life hell for Cubans. While the right-wing Cuban exile crowd and allied zealots like the Wall Street Journal’s Mary Anastasia O’Grady prefer to insist that there is “no blockade”, reality indicates very much otherwise.

Sixty years ago, on February 7, 1962, an “Embargo on All Trade with Cuba” entered into effect under the supervision of then-President John F Kennedy, who had taken care beforehand to procure for himself no fewer than 1,200 Cuban cigars. It continues to be the most exhaustive embargo ever imposed on any country by the US, and at the time included a ban on all sales of medicine and food.

This was two years after Kennedy’s predecessor Dwight Eisenhower had made a nifty suggestion during a White House conference. According to the writeup of the January 1960 conference that appears on the State Department website, “the President said that… we could quarantine Cuba. If they (the Cuban people) are hungry, they will throw Castro out”.

Who ever said US statesmen were not charming?

A few months after that, in April 1960, Eisenhower’s Deputy Assistant Secretary of State for Inter-American Affairs Lestor Mallory produced a memorandum on the subject of what was to be done about Fidel Castro now that the glory days of brutal US-backed dictatorship in Cuba had come to an end. Significantly, the very first “salient consideration” listed in the memo is that “the majority of Cubans support Castro”. So much for Washington’s favourite old “democracy” argument for regime change.

On account of this problematic majority and other salient considerations, Mallory advised that “every possible means should be undertaken promptly to weaken the economic life of Cuba”. He continued in nefariously longwinded diplomatic jargon:

“If such a policy is adopted, it should be the result of a positive decision which would call forth a line of action which, while as adroit and inconspicuous as possible, makes the greatest inroads in denying money and supplies to Cuba, to decrease monetary and real wages, to bring about hunger, desperation and overthrow of government.”

After all, there is nothing quite like adroit and inconspicuous starvation.

Fast forward to 2022, and the sanctions regime against Cuba is going strong, making it the longest-running embargo in US history – and one that has cost Cuba an estimated $130bn, according to the United Nations. The punitive details have fluctuated over the years, but the US has remained committed to strangling the Cuban example: the notion that there could be a functioning nation that places things like collective wellbeing and free health care and education above soul-sucking consumerism and savage military campaigns.

Penultimate US President Donald Trump imposed 243 new sanctions on the diminutive island, while also lifting a ban on US citizens suing international companies and individuals for utilising former US-owned properties in Cuba that were nationalised by the Cuban government after the 1959 revolution. Imperial grudges die hard.

Current US President Joe Biden – who was supposed to be, you know, nicer than Trump – imposed even more sanctions, ramping up the de facto US war on Cuba, and, in June 2021, the UN General Assembly voted for the 29th consecutive year in favour of a resolution calling for the end of the US economic blockade. As is par for the course on such matters, it was 184 nations against the US and Israel – another country where they like to believe that blockaded and besieged people are to blame for their own plight.

In his official explanation to the General Assembly in defence of the US vote, Political Coordinator for the US Mission to the UN Rodney Hunter described sanctions as “one set of tools in our broader effort toward Cuba to advance democracy [and] promote respect for human rights”, encouraging the Assembly “to support the Cuban people in their quest to determine their own future”. Obviously, preventing people from acquiring needed foods, medicines, and other basic goods is not the first thing that comes to mind when someone says “respect for human rights”. Nevertheless, the only democratic “future” for Cuba is, as ever, the one the US has determined the Cuban people should want.

A far sounder analysis of the Cuba situation appeared just after the UN vote, in the form of an article in The Nation by American actor and activist Danny Glover, who blamed the US embargo for Cuba’s shortage of millions of syringes in the middle of a pandemic: “No company wants to be bogged down navigating the complicated banking and licensing demands the US government places on transactions with Cuba”.

To be sure, the US has placed so many onerous restrictions on Cuba – and made doing business with Cuba such a colossal headache, with potentially gargantuan legal and financial repercussions – that it all seems anything but “adroit and inconspicuous”.

Here in Havana, staple food items and other essential products are conspicuously absent. Milk is an absolute luxury, and coffee is scarce. (I myself would have been equipped with the latter commodity, had the fine folks at the Mexican airline Viva Aerobus not made me leave it on the floor of the Mexico City airport as punishment for violating the weight allowance.)

None of this is to imply, of course, that the Cuban government is flawless – but current flaws must necessarily be analysed within a context of economic asphyxiation by the global superpower. As many an observer has reasoned in response to the argument that the Cuban state uses the embargo as a scapegoat for all its malevolent mismanagement: Why not just end it, then, and deprive the state of its excuses?

As luck would have it, my first interlocutor in Havana was a 50-year-old man who was in the process of repatriating himself to Cuba from Miami, where he had lived for the past five years working as a mechanic and truck driver. “My whole body hurts when I am in the US,” he told me in animated Cuban Spanish, “and I only begin to relax when I am on a plane out of there”.

He had concluded in his old age, he said with a wink, that he needed very few things to be happy. Life in the US was not one of them, because what he had experienced in the US was not life but rather capitalism – an “American dream” in which he never even had time to go fishing because he was always working. Yes, Cuba was crazy, but it was a craziness he understood and loved – and plus he was tired of listening to Cuban exiles in Miami endlessly plot their right-wing revolution.

Now, as the 60-year-old US embargo forces Cubans to live with less and less while imperial immunity from human decency and compassion proceeds apace, it is worth hanging on, perhaps, to Che Guevara’s words: “The true revolutionary is guided by great feelings of love”.