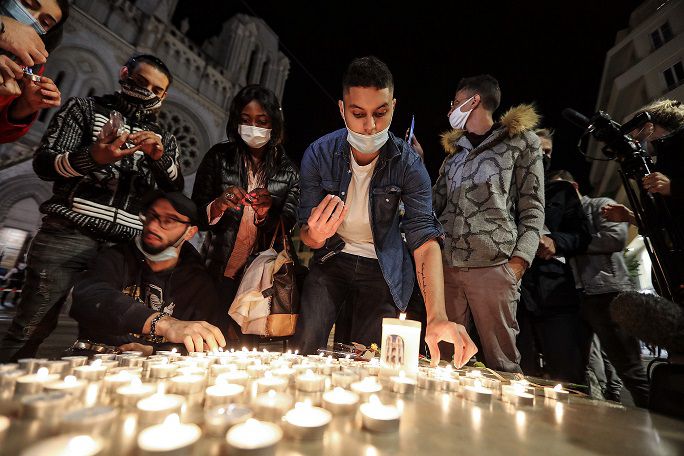 Three people, one of them Brazilian, died this Thursday in a knife attack on a church in Nice, in southeastern France, which President Emmanuel Macron called an 'Islamist terrorist attack' in a country on high alert.
"We will not give an iota" in the defense of French values, Macron declared in a climate of diplomatic tension with political and religious leaders of Muslim countries and after the beheading of a teacher at the hands of an Islamist two weeks ago.

In addition to the attack in Nice, a guard from the French consulate in the Saudi city of Jeddah was wounded in another attack and an Afghan was arrested in the French city of Lyon when he tried to get on a tram with a knife, all on the same day.

The Nice attacker, a 21-year-old Tunisian migrant who arrived in France at the beginning of the month after passing through the Italian island of Lampedusa, broke into the Notre-Dame basilica in Nice around 0900 (0800 GMT) armed with a knife. a city on the French Riviera that four years ago was already the target of a jihadist attack that left 86 victims.

The attacker, who according to a source close to the investigation is called Brahim Aouissaoui, repeatedly shouted "Allah Akbar" (Allah is the greatest). He was injured by at least six shots during the police intervention and is currently hospitalized.

Two of the victims were killed inside the basilica: an elderly woman who was beheaded by the attacker who tried to behead her and the basilica's sacristan, a 45-year-old layman, married and father of two girls.

The third victim managed to flee seriously injured to a neighboring bar, but died shortly after, police sources told AFP .

It is about “a 44-year-old Brazilian, mother of three, living in France,” announced the Foreign Ministry of the South American country. It is unknown whether he also had French nationality.

Tell my children that I love them, the woman managed to say before she died, according to testimonies released by the BFMTV network .

Brazilian President Jair Bolsonaro called the attack an act of "cristofobia" and affirmed that such an act "has to be fought, it does not have to be [answered] with little flowers."

The young Tunisian had arrived in Lampedusa, a common port for undocumented immigrants, at the end of September. He was quarantined by the Italian authorities, and later released with an order to leave the territory. He arrived in France in early October.

In the middle of the month, history teacher Samuel Paty was beheaded by a Russian Chechen refugee for showing his students cartoons of the Prophet Muhammad in a free speech class.

The French government raised the level of security throughout the country to "attack urgency", which corresponds to a state of maximum vigilance, and increased the number of military personnel who patrol the streets from 3,000 to 7,000, to protect in particular places of worship in the eve of the Catholic feast of All Saints on Sunday.

The Tunisian government, after condemning the attack, announced the opening of an investigation.

After freedom of expression, it is today freedom of religion and freedom of conscience that are under attack, said Prime Minister Jean Castex.

Daniel Conilh, a waiter at a cafeteria near the church, told AFP the minutes of panic that followed the attack.

A lady came directly from the church and told us 'run, run there is someone who attacked [with a knife], there will be shots, there are dead people'! There was a wave of panic we heard many shots.

“I saw the guy [the attacker] walk into the cathedral. Then I heard a lot of shots, ” Aurélien Thiebaut, another witness to the attack , told AFP .

Outside of France, condemnation reactions multiplied in the wake of the Vatican, which considered that "terrorism and violence can never be accepted."

Turkey, which has severely criticized the publication of cartoons of the Prophet Muhammad in France, also "strongly" condemned this "savage" attack and expressed its "solidarity with the French people."

"This attack was directed at ordinary parishioners who came to pray in silence," said Bishop Eric de Moulins-Beaufort, president of the French Episcopal Conference.

"I can only strongly condemn the cowardice of this act against innocent people," Abdallah Zekri, general delegate of the French Council of the Muslim Faith (CFCM), told AFP.

The French deputies, who were debating the new national confinement decided the day before and which came into force this Thursday at midnight, observed a minute of silence.

France has been plagued by terrorist attacks since 2015, when a jihadist attack on January 7 against the satirical weekly Charlie Hebdo left 12 dead. On November 13 of the same year, a jihadist command carried out coordinated attacks in Paris that left 130 dead.

The trial is currently taking place in Paris for the attack on Charlie Hebdo, in which some of the most famous cartoonists in France were killed.

Coinciding with the opening of the trial, the weekly published the cartoons of Muhammad that had made him a target of the jihadists, which earned him condemnations in the Muslim world.
#Donald Trump  #Joe Biden
Add Comment