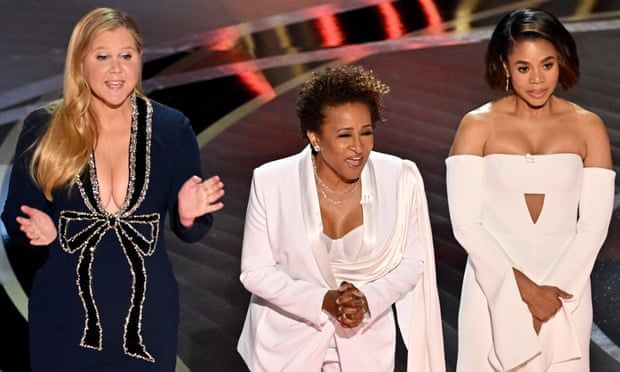 Four years on from #MeToo, the Oscars’ feminism has gone backwards

While the dial only seemed to be turning one way, the 94th Academy Awards was unexpectedly rich in sexist ‘her-indoors’ gags, undoing any progress

If this year’s Oscars had a spirit animal, you’d have to say it was Les Dawson. An uncharacteristically aggressive and unfunny Dawson, perhaps. But the 94th Academy Awards proved to be an evening unexpectedly rich in “her-indoors” gags for the lads, while women stood on the sidelines making abashed cracks about their own physical shortcomings.

The most generous possible reading of Chris Rock’s joke about Jada Pinkett Smith, for instance, is that he simply finds the idea of a woman having short hair hilarious. This does not seem unlikely. After all, his preceding gag concerned the domestic nightmare which would await poor Javier Bardem should he win best actor but his missus, Penélope Cruz, fail to bag best actress. You know what women are like!

Four years on from #MeToo, the Oscars’ feminism has turned flimsy and performative with whiplash speed. This was hard to predict: the dial only seemed to be turning one way.

In 2018, Kevin Hart relieved himself from Oscars duties just days after he was announced as the host, following the discovery of homophobic tweets. This year saw the return to the podium of hosts for the first time in four years: all of them women, none of them known for taking prisoners. Yet, under the direction of incoming telecast producer Will Packer – a longtime collaborator of Hart’s, as it happens – nobody on stage on Sunday seemed as intent on undoing any progress as Amy Schumer, Regina Hall and Wanda Sykes. 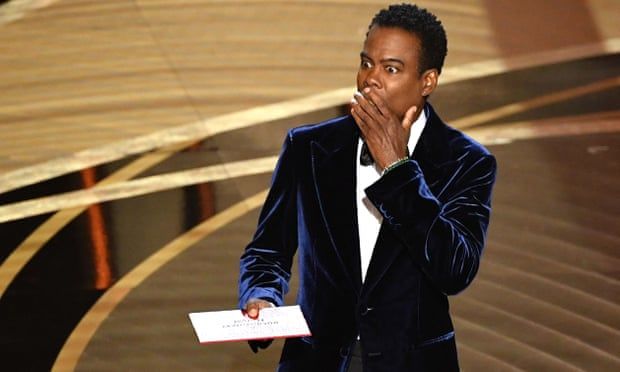 You know what women are like! Chris Rock presents at the Oscars.

In one skit, Sykes dragged up as Venus and Serena Williams’ father, Richard, apparently for the sole purpose of complaining about how much hair she had to shave from her legs. Schumer’s routine majored on pointing out to the audience that she was still to shed all her baby weight, three years after the birth of her son. She then dangled from the ceiling in a skin-tight Spider-Man outfit that turned her into a floating punchline – a human piñata to be whacked with our best lines.

This was the sort of shtick Rebel Wilson used to peddle prior to her recent radical health drive. As witnessed at the Baftas a fortnight ago, Wilson has traded it instead for a sort of angry horniness, with most jokes adhering to the template of her desperation to perform that particular sexual favour on this particular actor.

The lucky recipient of the sexually desperate baton on Sunday was Hall, a dignified and interesting actor, who somehow mentioned she was single in her first appearance and, in her second, summoned hand-picked actors for a “naked” Covid test, eventually giving Jason Momoa a substantial pat-down.

The longer the night lasted, the more Dawson’s influence waned. Next year, they should just refashion the statuette in the image of Benny Hill.