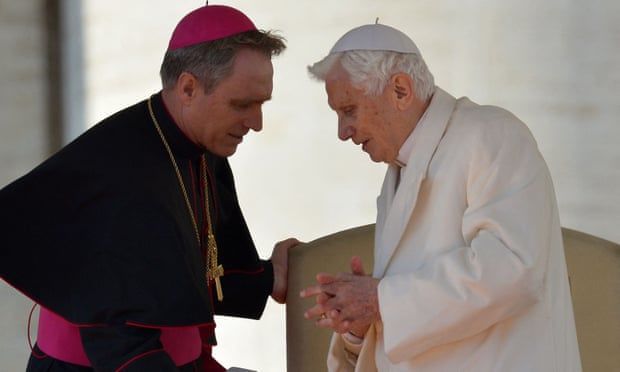 Benedict, who resigned as the global leader of the Roman Catholic church in 2013, said on Monday that he had attended a meeting with local church officials in 1980 to discuss a suspected paedophile priest. He blamed a previous written statement to German investigators – in which he said he was absent from the meeting – on an editorial error.

His admission comes four days after a report on the investigation claimed that Benedict had failed to take action against four priests accused of child sexual abuse when he was archbishop of Munich, a position the then cardinal, Josef Ratzinger, held between 1977 and 1982, and that his denial of being at the meeting in question lacked credibility.

In a statement to the German Catholic news agency KNA that was republished by the Vatican News website, Georg Gänswein, Benedict’s personal secretary, said the former pontiff would like to apologise for his mistake, while stressing that it was not made “out of any bad faith” but was a consequence of “an oversight in the editorial processing of his statement”.

Gänswein added, however, that no decision had been made at the meeting about a pastoral reassignment of the priest in question and that further explanations would follow once Benedict, 94, had read the full report.

The law firm Westpfahl Spilker Wastl was commissioned by the archdiocese of Munich and Freising to investigate how child sexual abuse cases were handled between 1945 and 2019.

The meeting Benedict attended discussed Peter Hullermann, a now notorious paedophile priest who had been transferred to Munich from Essen, where he was accused of abusing an 11-year-old boy. At the meeting, during which Benedict was quoted in the minutes, it was decided that Hullermann would be admitted to the diocese despite his known history.

Hullermann went on to be reassigned and sexually abuse more children, before being convicted in 1986 of paedophilia and distributing pornography. He was given an 18-month suspended prison sentence. Hullermann was reassigned again in 1987 to Garching an der Alz, where for the next 20 years he worked regularly with children as curate and parish administrator.

Martin Pusch, a lawyer at Westpfahl Spilker Wastl, said during a press conference last week: “During [Ratzinger’s] time in office, there were abuse cases happening. In those cases those priests continued their work without sanctions. The church did not do anything.”

As pope, Benedict came under fire for failing to act against widespread child sexual abuse within the Roman Catholic church and has repeatedly denied his role in knowingly covering up abuse, although in 2010 he admitted that the church “did not act quickly or firmly enough to take the necessary action”.
Add Comment