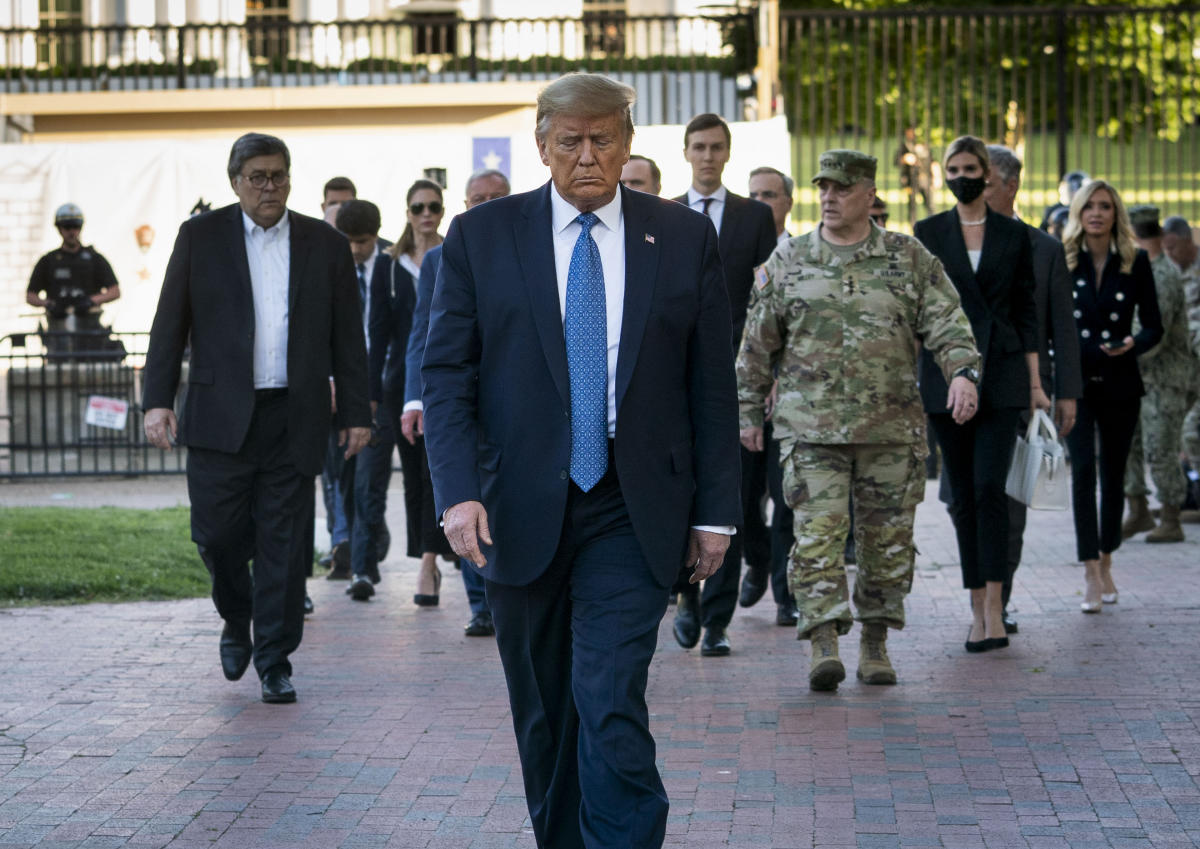 The challenge to a peaceful transfer of power after President Donald Trump lost the 2020 election has worsened “an extremely adverse environment” for the U.S. military, according to an open letter signed by several top generals and former defense secretaries.
The letter does not mention Trump by name. But in 16 points on the principles that are supposed to define civil-military relations, the signatories issued a thinly veiled indictment of Trump and the legions of his followers who called on the military to support his false claim that the election was stolen from him.

“Military officers swear an oath to support and defend the Constitution, not an oath of fealty to an individual or to an office,” the bipartisan group wrote, adding later, “It is the responsibility of senior military and civilian leaders to ensure that any order they receive from the president is legal.”

Two former defense secretaries who served under Trump, Jim Mattis and Mark Esper, were among those who signed the letter, which was published Tuesday on War on the Rocks, an online platform for analysis of national security and foreign affairs issues.

The letter reads like an American high school civics lesson. But in the six years since Trump entered the White House, the theme of the military’s duty to obey only legal orders has come up frequently. Trump’s tenure was a turbulent period for the Pentagon in which the president ordered American troops to the southwest border in a standoff against immigrants, riled up a crowd that stormed the Capitol and asked the military to deploy against protesters seeking racial justice.

Trump also asked his chief of staff, John Kelly, a retired Marine general, why he could not have military leaders who were loyal to him, like the “German generals in World War II,” according to “The Divider: Trump in the White House, 2017-2021,” by Peter Baker and Susan Glasser. (Baker is the chief White House correspondent for The New York Times; Glasser is a staff writer for The New Yorker.)

Retired Adm. Mike Mullen, who was chair of the Joint Chiefs of Staff during the George W. Bush and Obama administrations, said today’s political discourse was peppered with commentary that showed a lack of understanding of the military’s role.

The letter “is not pointed at Trump, but when you hear him talk about Hitler’s generals, well, that’s not who we are,” Mullen, one of the signatories, said in an interview.

The letter originated during a discussion between Peter Feaver, a Duke University professor, and retired Gen. Martin Dempsey, who was chair of the Joint Chiefs of Staff under President Barack Obama.

In an interview, Feaver said the continuing fallout included the demands on cable television — including on Fox News shows — for the resignation of Gen. Mark Milley, the current chair of the Joint Chiefs of Staff.

“Those cable personalities are not using this list as their standard,” Feaver said, in a reference to civil-military standards the letter sets out. (The letter also includes that “the military has an obligation to assist civilian leaders in both the executive and legislative branches in the development of wise and ethical directives but must implement them provided that the directives are legal,” with emphasis on the last phrase.)

In the summer of 2020, for instance, Trump summoned Milley to join him in a walk across a park near the White House where civilians protesting police brutality and racism had just been tear-gassed, so that the president could pose for a photo while holding a Bible.

The general apologized later, infuriating the president. Milley also angered Trump by asking other senior generals to review routine procedures for launching nuclear weapons during the last days of the Trump administration.

“General Milley was navigating civil-military relations at the point when the processes of the Trump administration was breaking down,” Feaver said. “If he takes a little splash here or there, it’s the best someone can do under those circumstances.”
#Donald Trump
Add Comment