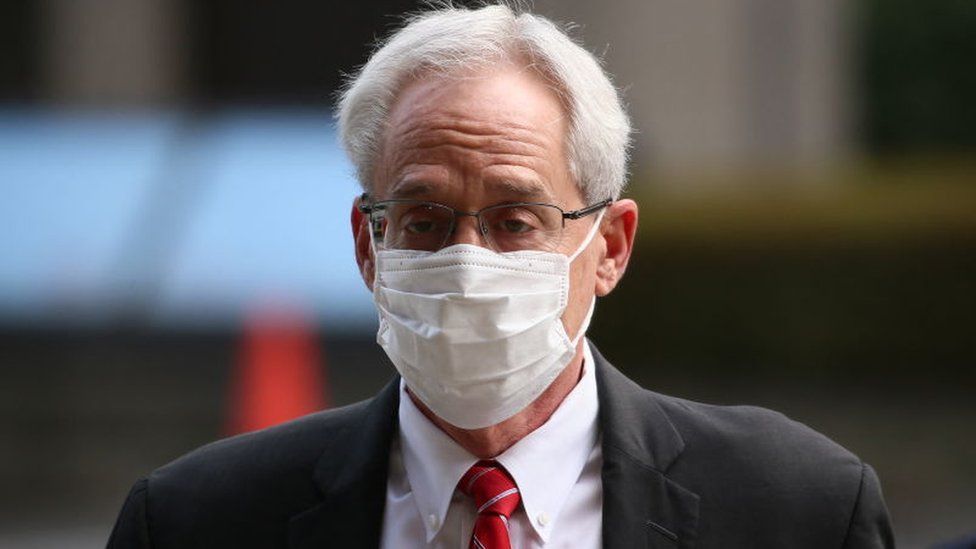 The court in Tokyo heard that Mr Kelly had helped Mr Ghosn hide part of 9.3 billion yen (£60m; $80.4m) of his income from financial regulators.

Mr Kelly was sentenced to six months in jail, suspended for three years.

In 2019, Mr Ghosn fled Japan to his home country Lebanon hidden in a box on a private jet.

The ruling means that Mr Kelly, who is a US citizen, will not be jailed as long as he adheres to the conditions of his sentence for the next three years.

Prosecutors had sought a two-year prison sentence for Mr Kelly.

Under Japanese law both sides could appeal the verdict.

Mr Kelly's sentencing brings to an end the first, and potentially only, trial over the charges that saw Mr Ghosn's arrest in 2018.

The court also fined Nissan 200 million yen for failing to disclose Mr Ghosn's pay. The carmaker pleaded guilty at the start of the trial 18 months ago.

This verdict will be a relief, not just for Greg Kelly and his family, but for the US government and the Japanese government too.

The Kelly case has been a thorn in the side of US-Japan relations for the last three years.

You can see that from the response of US Ambassador to Japan, Rahm Emanuel, who immediately released a statement welcoming the fact that Mr Kelly and his wife will now be able to return to the United States.

The verdict itself is only a partial victory for the Tokyo prosecutors.

In the end Mr Kelly was convicted of just one count of misreporting financial information, for one year, 2018.

The judges rejected the prosecutors' case that Mr Kelly was involved in a much larger conspiracy to hide around $80m of remuneration to former Nissan CEO Carlos Ghosn, going all the way back to 2010.

The cases against Mr Kelly and Carlos Ghosn have been hugely controversial and have shone an unwelcome light on Japan's judicial system, in particular its system of detaining and interrogating suspects for long periods without charge and without an attorney present.

Before Mr Ghosn's escape from Japan he was expected to be a co-defendant alongside Mr Kelly.

Mr Ghosn was first arrested on charges of financial misconduct, for allegedly under-reporting his pay package for the five years to 2015.

He has told the BBC about his dramatic escape, that involved disguising himself to slip unnoticed through the streets of Tokyo, being hidden in a large music equipment box and fleeing to his native Lebanon.

In 2021, an American father and son were handed jail terms in Japan for helping to smuggle Mr Ghosn out of the country on a private jet.

US Special Forces veteran Michael Taylor was sentenced to two years in prison, while his son Peter was handed a term of one year and eight months.