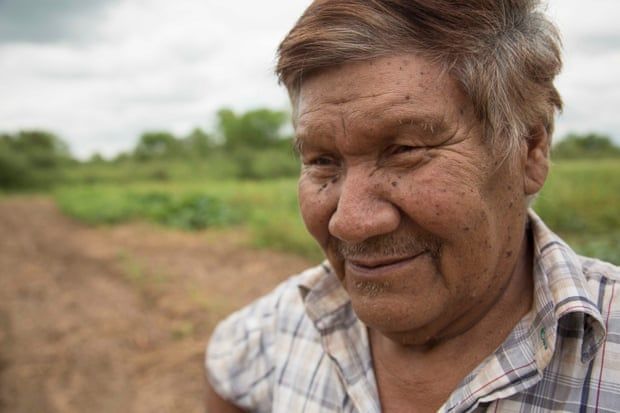 ‘For our grandchildren’: the man recording the lives of Paraguay’s vanishing forest people

Mateo Sobode Chiqueno’s lifelong project compiling cassettes of the Ayoreo people’s stories, songs and struggles to survive is now the subject of an award-winning film, Nothing but the Sun

In a tattered cardboard box in Mateo Sobode Chiqueno’s home, hundreds of plastic cassette cases contain four decades of memories. “Here in my house, I have more than 1,000 cassettes of Ayoreo histories and songs,” says Chiqueno, who keeps them alongside his tape recorder at his wooden shack in Campo Loro, Paraguay. Many of the voices belong to people who are dead.

Chiqueno began compiling his interviews with the Ayoreo, hunter-gatherers of the Chaco Forest, in 1979, after seeing missionaries using tape recorders to document their experiences. His tapes partially preserve a fast-disappearing culture.

The Ayoreo were victims of Catholic and Evangelical missionaries of the 1940s who sought them out and brought them to settlements like Campo Loro. Since the 1980s, cattle ranchers have bulldozed and burned about a fifth of the Chaco and, today, the Ayoreo number about 5,000, with barely a dozen small family groups still living in the forest.

“I’m an old man now. I don’t know how many more years I’ll live,” says Chiqueno, who was brought out of the forest as a child, both his parents dying soon afterwards. “The work will remain, in our future as Ayoreo … the work I’m doing is for our grandchildren, our children, so they can find the cassettes and all the messages of the Ayoreo who died many years ago.”

Chiqueno’s lifelong project is now the subject of a film directed by Arami Ullón, Nothing but the Sun, which documents his gently probing conversations. It has won multiple awards, including best feature documentary at Canada’s Lunenburg Doc Fest, the documentary prize at Cinélatino Rencontres de Toulouse and been nominated for a prestigious IDA documentary award. 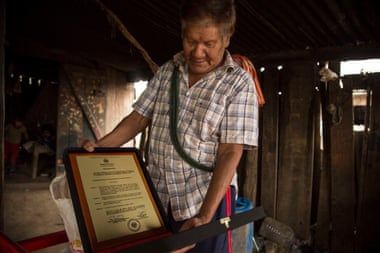 Mateo Sobode Chiqueno displays a plaque given to him in November 2021 by Paraguay’s senate in recognition of his work recording Ayoreo history.

It was Paraguay’s submission for this year’s Oscars (though it didn’t make the shortlist) and has been declared of national cultural, educational and historical interest by Paraguay’s senate.

Speaking from her home in Switzerland, Ullón praises Chiqueno’s qualities as an interviewer, describing his emotional encounter with José, the Ayoreo man who captured Chiqueno and his family to take them to the missionaries. The conversation, she says, “is one full of respect and understanding” for how the Ayoreo differently responded to the “trauma of contact”.

The tapes touch on subjects such as the Ayoreo worship of the sun, known as Yoquimamito, and how they climb trees to better hear him. They also contain vital ancestral knowledge, such as how the roots of the chicoi plant contain water – a godsend in drought, but now often inaccessible behind the barbed wire of private property.

One elderly man, Tune, recalls how he and his wife first glimpsed white men on horseback and ran, terrified, in different directions through the undergrowth. “We never saw each other again,” he says.

In another tape, a former shaman, who has since adopted Christianity after pressure from her daughters, sings about an encounter with a spirit who warned of future calamities for the Ayoreo.

A recurring topic for Chiqueno is how Ayoreo families were often tricked or forced into leaving the forest. Revisiting this distressing period means overcoming the shame and silence enforced by their missionary captors. “It’s like it were a muzzle,” he says. 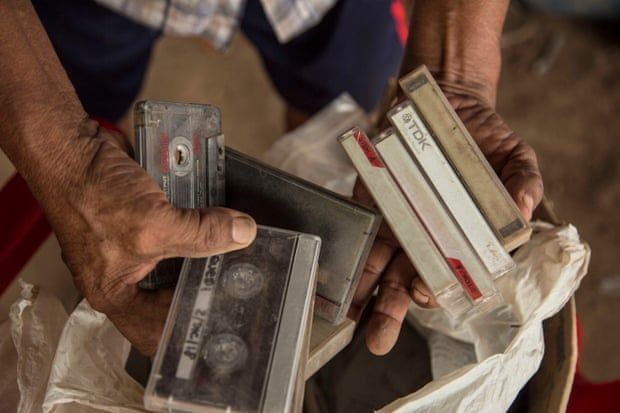 Chiqueno holding some of the thousands of tapes he has recorded of the Ayoreo people.

The recordings are being digitised by Iniciativa Amotocodie, a Paraguayan conservation organisation, which works with the Ayoreo. “We’re about halfway there,” says Miguel Lovera, the NGO’s director. Some tapes have unravelled, but Lovera says: “It’s a long-distance race that we’re not going to abandon.”

Meanwhile, international concern is growing for the fate of the Ayoreo. Last week, the first half of a new, 340-mile (550km) highway bisecting Ayoreo lands was inaugurated. The government says the road will supercharge the agribusiness sector, help integrate a remote area, and benefit local people. Critics fear it will hasten deforestation and further erode fragile native communities.

A few days before the inauguration, 10 organisations representing thousands of indigenous people across Peru, Brazil, Ecuador and Colombia issued an appeal for Paraguay’s government and international bodies to prevent the “genocide” of the Ayoreo, who still live in the wild. “For years the Paraguayan authorities have stood by and watched as the Ayoreo’s priceless forest goes up in smoke,” says Teresa Mayo at Survival International. 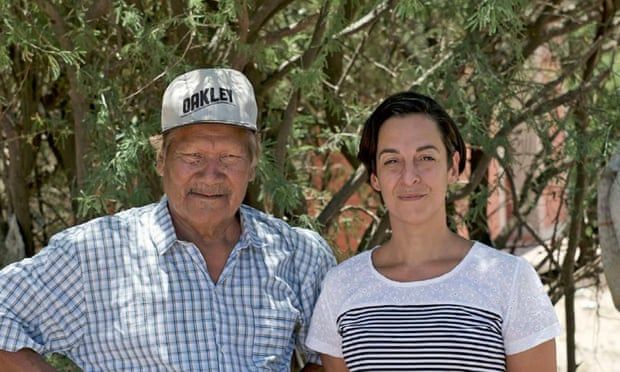 Chiqueno with Arami Ullón, the director of the Nothing But the Sun (Apenas el sol) documentary about his efforts to record Ayoreo history.

Paraguay’s government and business elite, Chiqueno says, should “respect the territory of the Ayoreo who are still in the forest and let them live how they want to live. Because they are human beings, too.”

The suffering and illness endured in the mission settlements, captured in Chiqueno’s recordings, should serve as a warning. “They [the Ayoreo in the forest] live better than us,” he says.

In the documentary, Chiqueno’s wife, Dojae Tona Picanere, says: “Some people don’t accept what you do.” Later on, however, she says: “But I like it because it comforts you. […] When you record something, you are looking after it, right?”