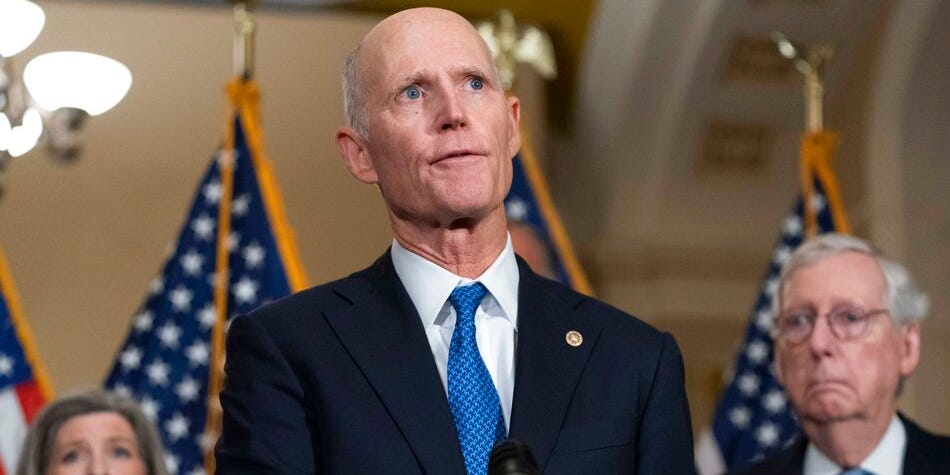 "I think we've got to reflect now. What didn't happen?" Scott said on Friday while on Fox News. "I think we didn't have enough of a positive message."
Sen. Rick Scott, the head of the campaign arm to elect GOP senators, on Friday called the 2022 midterm election results a "complete disappointment" for the Republican Party as so-called red wave failed to materialize.

The Florida lawmaker told Fox News host Sean Hannity that GOP voters simply did not turn out in sufficient numbers on Election Day to counteract Democratic voters across the country.

Hannity, who featured many GOP candidates on his program this year, questioned the perception of 2022 being a marquee year for Republicans.

"Where did all this pie-in-the-sky talk about a wave and a tsunami election come from? Because I never saw it," Hannity said.

Scott responded: "Here's what happened to us. Election Day ... our voters didn't show up. We didn't get enough voters. It's a complete disappointment."

The Florida senator served as the chairman of the National Republican Senatorial Committee during the current cycle and barnstormed the country in support of some of the party's most high-profile candidates.

Scott said that while GOP candidates were vocal in critiquing President Joe Biden's administration, the party didn't effectively offer a positive vision for voters in what was the first major national election after the 2020 presidential contest and the January 6, 2021, attack at the United States Capitol.

"I think we've got to reflect now. What didn't happen?" he continued to say. "I think we didn't have enough of a positive message. We said everything about how bad the Biden agenda was. It's bad, the Democrats are radical, but we have to have a plan of what we stand for."

Based on historical milestones, many observers expected Republicans to make major gains in Congress, as Biden has struggled with middling approval ratings and an electorate that has been frustrated by the direction of the country.

But Democrats have so far defied conventional wisdom, with the party on the cusp of potentially maintaining their Senate majority; control of the House is still up in the air days after the election, a scenario which was seen as highly unlikely even a week ago.

Scott — along with Republican Sens. Ron Johnson of Wisconsin and Mike Lee of Utah — issued a letter this week asking for colleagues to delay a Senate GOP leadership vote on Wednesday.

"We are all disappointed that a red wave failed to materialize, and there are multiple reasons it did not," the letter read. "We need to have serious discussions within our conference as to why and what we can do to improve our chances in 2024."

Senate Minority Leader Mitch McConnell of Kentucky, who earlier this year spoke of how "candidate quality" plays a major role in races for the upper chamber, has led the GOP caucus since 2007.

He has long enjoyed the near-universal support of his colleagues, but Scott was poised to launch a challenge to the Bluegrass State senator until it became clear that a GOP majority might not happen and that the outcome in Georgia's Senate race wouldn't be decided until next month, per Politico.

While on Hannity's show, Scott took the time to boost Georgia Republican Senate nominee Herschel Walker, who will face Democratic Sen. Raphael Warnock in a Dec. 6 runoff election after neither candidate cleared the 50% threshold of victory mandated by state law earlier this week.

"We have got to do everything we can to help Herschel," Scott said.
#Joe Biden  #Johnson
Add Comment