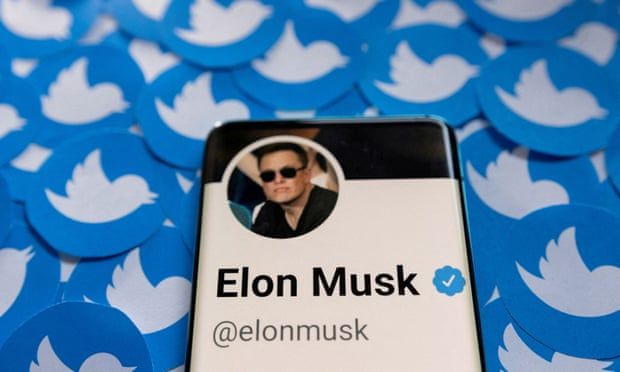 The class-action lawsuit argues that the deal cannot close before 2025
Elon Musk and Twitter were sued on Friday by a Florida pension fund seeking to stop Musk from completing his $44bn takeover of the social media company before 2025.

In a proposed class-action lawsuit filed in Delaware Chancery court, the Orlando police pension fund said Delaware law forbade a quick merger because Musk had agreements with other big Twitter shareholders, including his financial adviser Morgan Stanley and Twitter founder Jack Dorsey, to support the buyout.

The fund said those agreements made Musk, who owns 9.2% of Twitter, the effective “owner” of more than 15% of the company’s shares. It said that required delaying the merger by three years unless two-thirds of shares not “owned” by him granted approval.

Morgan Stanley owns about 8.8% of Twitter shares and Dorsey owns 2.4%.

Musk hopes to complete his $54.20 a share Twitter takeover this year, in one of the world’s largest leveraged buyouts.

Twitter and its board, including Dorsey and CEO Parag Agrawal, were also named as defendants.

The lawsuit also seeks to declare that Twitter directors breached their fiduciary duties, and recoup legal fees and costs. It did not make clear how shareholders believed they might be harmed if the merger closed on schedule.

On Thursday, Musk said he had raised about $7bn, including from investors like the tech tycoon Larry Ellison, the Qatar state investment fund and the world’s biggest cryptocurrency exchange, to help fund the takeover.

The filing also showed that a margin loan taken out by Musk to finance the deal would be reduced from $12.5bn to $6.25bn.

The financing news came as CNBC reported that Musk will serve as temporary chief executive of the social media platform for a few months once the deal closes.

Musk had no financing lined up when he announced plans to buy Twitter last month.

Some of the new investors appear to share interests with Musk, a self-described “free speech absolutist” who could change how the San Francisco-based company moderates content.

Florida’s state pension fund also invests in Twitter, and the state’s governor, Ron DeSantis, said this week it could make a $15m to $20m profit if Musk completed his buyout.

On Friday, the New York Times reported Musk said he would quintuple revenue to $26.4bn by 2028 from its $5bn last year, citing a proposal presented to investors.

Under Musk, the company would reduce its advertisement from 90% to nearly 45% of the company’s total revenue. Advertising would generate $12bn in revenue and subscriptions nearly $10bn in 2028, according to the document, the publication reported.

Another objective in the proposal is increasing Twitter followers to 931 million and also hiring more than 3,500 additional employees. Twitter has 229 million daily users worldwide.