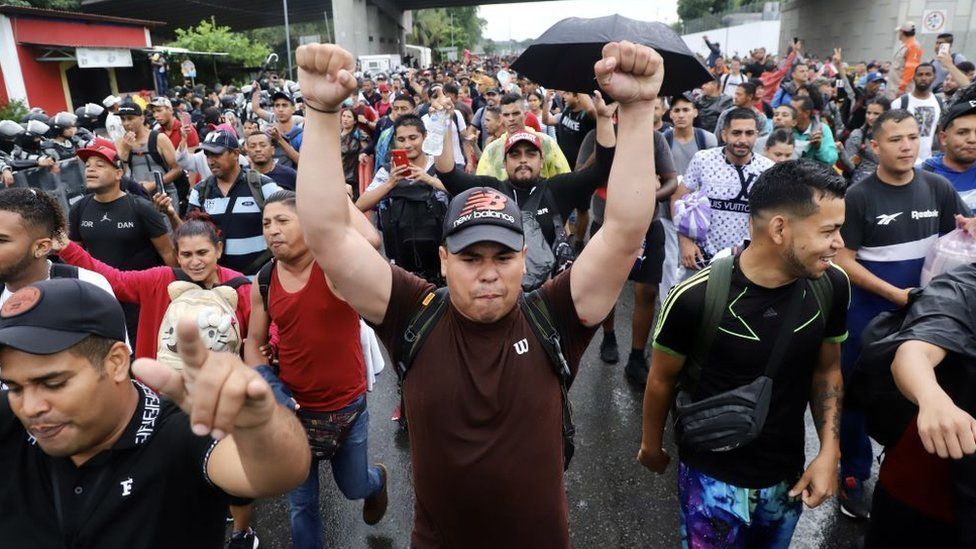 Migrant caravan heads to US as key summit begins

Thousands of migrants are headed to the US-Mexican border in a caravan timed to coincide with a meeting of Western Hemisphere leaders in Los Angeles.

Some 6,000 people, including many from Venezuela and Central America, have begun walking from the southern tip of Mexico north as part of a caravan.

Migration is among the top issues on the agenda at the Summit of the Americas.

The caravan may be one of the largest in recent years.

On Monday, the group began its 1,270 mile (2,000 km) journey to the US from the Mexican city of Tapachula, near the country's border with Guatemala. It is unclear when they will arrive at the northern frontier.

The group's organisers say it is made up of people who are fleeing instability, violence and poverty in their home countries.

Robinson Reyes, 35, a Colombian migrant, said he was traveling north after waiting in vain in Mexico for a month for a humanitarian visa.

"We want a future for our family," he told Reuters. "We are not violent. We just want a better future."

Mr Reyes added that the caravan timed its departure to coincide with the Summit of the Americas in Los Angeles, where regional leaders are expected to announce new plans to address mass migration from Latin America.

"That's why we went out today," he said. "God willing, they can talk and resolve this".

Efforts to address migration at the summit are likely to be complicated by geopolitical tensions, however.

Earlier this week, Mexican President Andrés Manuel López Obrador said he would not attend after the White House announced that Venezuela, Cuba and Nicaragua - all significant source countries for migrants - would be excluded from the summit.

A senior administration official cited a "lack of democratic space" and deteriorating human rights situations in all three countries as the reason for their exclusion.

On Friday, US President Joe Biden is scheduled to hold a meeting with regional leaders to sign a declaration aimed at addressing migration.

A senior official told reporters on Monday that Mr Biden would also discuss a "bold" new plan aimed at "responsibility sharing and economic support for countries that have been most impacted by refugees and migration".

The official added that Mexico is still expected to sign despite Mr López Obrador's absence.

"We believe in every way they are fully committed to it," the official said.