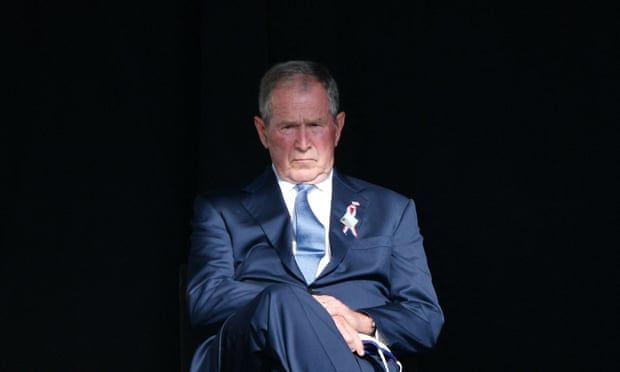 Details of the alleged scheme to kill the former president are laid out in a warrant that the FBI obtained in March to search the accused operative’s cellphone records, a 43-page document that was only unsealed in recent days.

The man in the warrant – 52-year-old Shihab Ahmed Shihab Shihab – was arrested on Tuesday morning, federal prosecutors said in a statement.

A spokesperson for Bush said in a statement on Tuesday that the former president was unworried.

“President Bush has all the confidence in the world in the US Secret Service and our law enforcement and intelligence communities,” said the former president’s chief of staff, Freddy Ford.

A spokesperson for the FBI declined comment on the investigation, which Forbes was first to report on Tuesday. Shihab, described as an employee of restaurants and markets in Columbus, Ohio, and Indianapolis, could not be reached.

The warrant, filed in Ohio’s southern federal district court, draws from alleged intelligence provided by informants and surveillance of the suspect’s account on WhatsApp, the supposedly encrypted messaging platform owned by Meta.

According to the warrant, Shihab, a Columbus resident, wished to murder Bush as revenge for the Iraqis killed during the invasion of the country in 2003, during the first of Bush’s two terms in office. That military campaign was in headlines again last week when Bush mentioned it by accident while delivering a speech about Russia’s invasion of Ukraine in February.

In any event, the FBI claims that Shihab – who has been in the US since 2020 with a pending asylum claim – told a bureau informant who specializes in smuggling immigrants that he had belonged to a group named al-Raed (Arabic for thunder), headed until recently by a former pilot for the executed Iraqi dictator Saddam Hussein.

Shihab, the warrant said, then revealed his aspirations to kill Bush and asked whether the informant knew how to get replica law enforcement badges to help advance the plot, for which his role was to scout out the former president’s homes and offices, while also securing weapons and cars.

The suspect also allegedly asked whether the informant could smuggle into the US seven or so Islamic State assassins who would carry out the hit and then whisk them away by the same route after Bush was dead, the warrant said.

The purported plan called for the assassins – at least some coming from Iraq, Turkey, Egypt and Denmark – to enter via the southern border on visitor visas from Mexico.

The suspect, who purportedly accepted tens of thousands of marked dollars to facilitate bringing the assassins into the country, also allegedly boasted that he and some compatriots “were actively looking … for a former Iraqi general … and others who had aided the Americans in the war” and were now apparently living in the US under false identities, the FBI wrote in the warrant.

Shihab allegedly accompanied the purported smuggler-informant to Dallas in February to record video of the former president’s home as well as of his presidential library on the campus of Southern Methodist University.

In March, Shihab allegedly met with others in a hotel room to look at guns and fake law enforcement uniforms that he ostensibly hoped to use in the assassination plot.

The suspect is accused of exchanging WhatsApp messages that were generally about the scheme with both the smuggler-informant and a second informant who was a customer of the smuggler. Both informants also recorded face-to-face meetings with Shihab as part of the elaborate sting operation which led to his arrest, federal officials alleged.

Although the warrant does not specify exactly how agents were turned on to Shihab, they could see his WhatsApp messages since last year, the document makes clear. In part, that was because he was using a phone given to him by one of the informants at the FBI’s request.

Shihab faces charges of illegally bringing people to the US as well as of aiding and abetting the attempted murder of a former American government official. Upon conviction, the former crime can carry up to 10 years and the latter violation a maximum of 20 years.
Add Comment