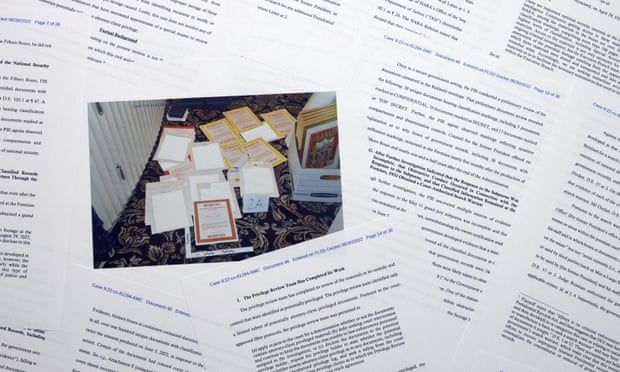 Revelation raises possibility that some of government’s most highly sensitive documents may still be unaccounted for
Among the items the FBI retrieved from Donald Trump’s Mar-a-Lago resort this month were 90 empty folders marked classified or for return to the White House staff secretary or a military aide, according to a detailed inventory of items made public on Friday.

The inventory – unsealed by a federal judge overseeing the former president’s request to get a so-called special master to determine what materials the justice department can use in its investigation – provided the fullest picture to date of what Trump had retained.

In itemizing the contents of boxes of seized materials, the inventory, put together by the justice department, showed the FBI retrieved 71 empty folders from Trump’s office and 19 empty folders from a storage room when agents executed a search warrant at Mar-a-Lago earlier this month.

The empty folders carried one of two designations, according to the inventory: some files had “Classified” banners, while other files were labeled “Return to Staff Secretary/Military Aide”, appearing to indicate that highly sensitive documents were not returned as designated.

The startling discovery immediately raised, for the first time, the prospect that some of the US government’s most closely guarded secrets could remain unaccounted for, even after the FBI went through Mar-a-Lago and retrieved vast amounts of materials from the property.

Still, the Office of the Director of National Intelligence is conducting a risk assessment – not a damage assessment – of Trump’s unauthorized retention of classified documents, signaling that at least for now, it believes the material has not otherwise been compromised.

Federal agents also seized thousands of government documents – some with classification markings ranging from “Confidential” to “Top Secret”, and others that appeared to be presidential records – as well as hundreds of newspaper and magazine clippings from 2008 to 2020, gifts and clothes, the inventory showed.

In a status report from its case team conducting the criminal investigation into the Mar-a-Lago documents that accompanied the inventory, the justice department said that although it had completed an initial review of the materials, its full review process was ongoing.

The justice department added in the status report that it intended to use all evidence about the documents, including their nature and their location, to inform the criminal investigation examining potential obstruction and potential violations of the Espionage Act.

Trump remained quiet about the release of the inventory on Friday, though a spokesman said it showed the FBI overreached: “The new ‘detailed’ inventory list only further proves that this unprecedented and unnecessary raid of President Trump’s home … was a smash and grab.”

The detailed list of 33 boxes seized from Mar-a-Lago, which followed the release of the initial property receipt filled out by the FBI at the time of the search, additionally provided more information about how sensitive documents were commingled with more general items Trump potentially kept as souvenirs.

Item number 26 – described by the Justice department as a “Box/Container from Storage Room” – included, for example, eight press clippings from 2017-2020, three documents marked “Top Secret”, an article of clothing, a book, and 1,841 government documents or photographs without classification markings.

The chaotic and wide-ranging contents of the boxes reflected previous reporting by the Guardian and others that the West Wing and the White House residence was packed up in a hurry, and in haphazard fashion, during the final days and hours of the Trump presidency.

Trump was something of a “pack rat” who hoarded materials he saw as his, according to former aides, and partly as a consequence of his refusal to accept he lost the 2020 election, many items from the White House were collected into boxes that were transported to Mar-a-Lago.

The items listed in the inventory have already been screened for potential attorney-client privilege, the justice department said. Judge Aileen Cannon is expected to rule shortly on whether to grant Trump’s request to have a special master conduct the filter instead.

At least 320 classified documents have been recovered from Mar-a-Lago since January. More than 100 of those were seized in the August search. The justice department has also released a photograph of folders marked “Secret” and “Top secret” scattered over a Mar-a-Lago carpet. Some were stamped “NOFORN”, indicating they should not be seen by any non-US citizen without permission.

Trump has decried the investigation as a politically motivated attack on him and nearly all top Republicans have closed ranks around him and rallied to his defense. His lawyers have sought to argue that the case should be treated akin to failing to return a late library book – not a real threat or conspiracy.

Democrats have also said the documents reveal a fundamental lawlessness in Trump’s behavior, characterized by acting with impunity and a disregard for the US norms and traditions that usually govern former presidents.

At the same time the scandal has probably harmed Trump’s frequent hints that he wants to run for the White House again in 2024. Joe Biden has used the FBI search as part of a general warning of the extremist nature of Trump and his followers which in a primetime speech on Thursday night he portrayed as a growing threat to American democracy and a potential cause of political violence.

Since the FBI raid numerous law enforcement officials have warned that federal buildings and government workers are at risk of attack, especially as rightwing politicians and media pundits have sought to blame them for seeking to stop any Trump political comeback.
#Donald Trump  #Joe Biden
Add Comment