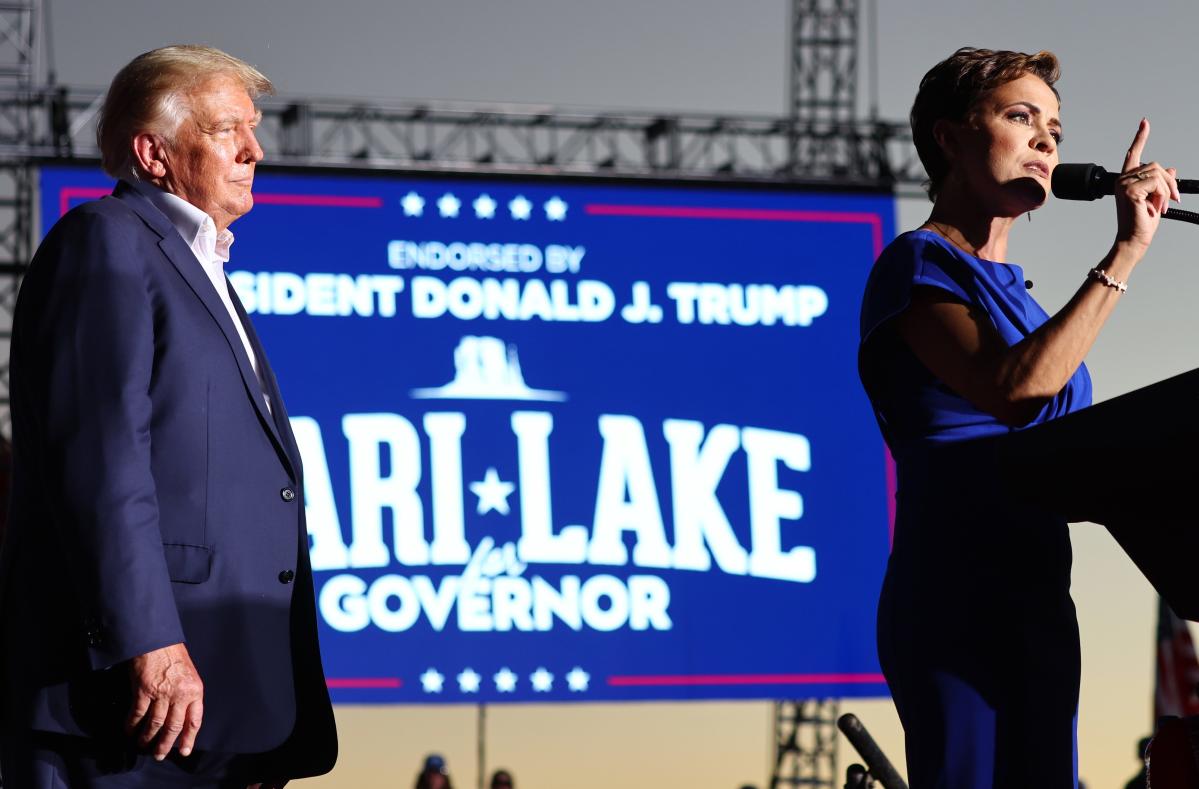 Observers pointed the finger not just at former President Donald Trump but at the far-right candidates who aligned themselves with him.
After an underwhelming performance in the midterm election, Republicans across the nation blamed former President Donald Trump, who amplified far-right candidates who underperformed Tuesday, hobbling the party that hoped to take decisive control of Congress and governor's offices.

"Donald Trump gives us problems politically,” former House Speaker Paul Ryan told a Wisconsin television station Thursday. “We lost the House, the Senate and the White House in two years when Trump was on the ballot or in office, and I think we just have some Trump hangover. I think he’s a drag on our ticket."

Observers pointed the finger not just at Trump but at the far-right candidates who aligned themselves with him. But whoever the culprit, it wasn't a good night for candidates who modeled their politics after the former president.

Many of the far-right candidates seeking office lost, like Doug Mastriano in Pennsylvania and Bo Hines of North Carolina, who said he would defend Trump’s America First agenda. Others, like Rep. Lauren Boebert of Colorado struggled in Republican districts.

Rep. Marjorie Taylor Greene of Georgia, who was disciplined for her inflammatory social media posts early in her first term, won in her deep-red Georgia district, and so did Rep. Matt Gaetz of Florida, a self-described “firebrand” and “Donald Trump Republican.” But those predictable wins were drowned out by broader Republican struggles.

Far-right candidates running for statewide offices in swing states like Arizona, Pennsylvania and Georgia either lost to Democrats, did not make it past the primary or are in races still too close to call.

“A majority of voters are not buying what Trump is peddling,” said Rusty Hills, a lecturer in public policy at the University of Michigan and former leader of the state’s Republican Party. “And so when you get to swing states, purple states, toss-up states, Trump is just toxic.”


Far-right newcomers seeking seats in the House were overwhelmingly unsuccessful, while most of their incumbent colleagues in heavily Republican districts were able to hold onto their seats, with some overperforming and others winning by slim margins.

In North Carolina, Republicans threw their support behind Hines, a former college football player with Trump's backing. As the election grew near, one forecast from FiveThirtyEight predicted a 77% chance Hines would take office. Instead, Democratic state Sen. Wiley Nickel won with more than 51% of the vote.

Boebert, a firebrand known for her inflammatory comments about Muslims and other groups, is facing a razor-thin margin in a district that Cook Political Report predicted a Republican could win by a 7-point margin.

“Any other Republican who was even vaguely mainstream conservative would’ve won that easily,” said Larry Sabato, a professor at the University of Virginia’s Center for Politics who runs a forecasting model for election outcomes.

“It’s because after awhile, even in deeply red territory, an extreme candidate like Boebert just rubs people the wrong way, and they just say, ‘Enough already. Enough. We’ll have a Democrat for two years.’”

Rachel Blum, an assistant political science professor at the University of Oklahoma, said Boebert underperformed compared to how Trump fared in the district in previous elections.

Boebert held a slight lead over Democratic challenger Adam Frisch Friday afternoon, though Blum said it's "kind of strange" she would have such a narrow lead since redistricting made Boebert's district lean more Republican.

Joe Kent of Washington is a self-described America First candidate who once appeared in an interview with a white nationalist group and has repeated the Great Replacement, an extremist conspiracy theory that white people are intentionally being replaced with immigrants.

With many votes left to count, he is down by about two points in the district of outgoing Rep. Jamie Herrera Beutler, one of ten House Republicans to vote to impeach Trump following the Jan. 6, 2021 attack on the Capitol.

Kent has assured his followers he can still come back, given he ended up beating Beutler in the primary by a narrow margin after being down in the early vote count. That would still be eking out a victory in a district that Cook Political Report rates as solid Republican and estimates a Republican presidential candidate could win by five points.

“It’s a district that should be held by a mainstream Republican, but he’s not mainstream,” Sabato said. “At some point the Republican activists who show up for primaries or conventions are going to accept that you must compromise and remember your district or you’re going to lose.”

Many incumbent members of the conservative House Freedom Caucus did win their races, including Greene, Reps. Paul Gosar of Arizona, Jim Jordan of Ohio, Scott Perry of Ohio and Chip Roy of Texas. Two newcomers backed by the caucus' campaign arm had decisive victories called early on Tuesday: Anna Paulina Luna of Florida and Max Miller of Ohio.

Rep. Troy Nehls, a Freedom Caucus member from Texas, defended Trump-endorsed candidates, saying "some of them overperformed" and pointed to his own race. Cook Political Report rates his district as 11 points more Republican than average, but he defeated his Democratic opponent by nearly 30 points. Greene won her 22-point-leaning district by nearly 32 points.

"Donald Trump is the leader of our party, period," he told USA TODAY.


Far-right candidates seeking statewide offices – from Senate to secretary of state – are at best struggling to establish leads in swing states, while their allies in red states coasted to victory in races that were called Tuesday night.

In Michigan, a state Trump won in 2016 and reached deep to influence in 2022, his candidates for governor, secretary of state, and attorney general each lost to their Democratic opponents by margins of about 11, 14, and 9 percentage points, respectively.

Trump-backed candidates with far-right streaks trailed in yet-to-be-called races in Arizona as well.

Kari Lake, the Republican nominee for Arizona governor, remains in a too-close-to-call race with Democrat Katie Hobbs, who widened her lead to more than one percentage point as of Friday morning. Going into the election, FiveThirtyEight projected Lake had a 68% chance of winning the race and estimated she would win by a two-point margin.

In Georgia, Gov. Brian Kemp won his election easily, by an 8-point margin. He is a Trump foe who defeated Trump's candidate in the primary earlier this year. However, Trump's Senate candidate Herschel Walker failed to capture a majority of the vote against incumbent Democratic Sen. Raphael Warnock, so the race heads to a runoff.

Trump-backed candidate Kelly Tshibaka of Alaska is in a close race with Sen. Lisa Murkowski of Alaska, who voted to convict Trump on impeachment charges related to the Jan. 6, 2021 attack on the Capitol. The two women were the top two vote-getters in the Senate election, and a second count will decide who takes the seat.

'A drag on the party’


One of the only Republican upsets on Tuesday night came from Michael Lawler of New York, a Republican who ran on the economy and unseated Rep. Patrick Maloney, the head of the House Democrats' campaign arm.

Lawler suggested Republicans look to the future – not Trump.

"I think anytime you are focused on the future, you can’t so much go to the past," Lawler told CNN. "And I think people are really excited about the opportunity to address the challenges that we’re facing as a country and I think more focus needs to be on the issues and the substance of the issues than on Trump."

Lawrence Rosenthal, the chair of the Center for Right Wing Studies at UC Berkeley, said the Republican party has trapped itself by making Trump the face of the party and pushing for more extreme candidates during primaries. Once the far-right candidate advances to the general election, Rosenthal said they often fall on the wrong side of issues when it comes to the majority of American voters.

“Republicans who want to move on from Trump are caught in a bind, where they still have to appeal to the MAGA crowd ... and at the same time, convey in the general election that they're putting distance between themselves and that crowd,” Rosenthal said. “It’s a very difficult line for them to tiptoe across.”

Hills, of Michigan, said Republicans should have been able to win on the economy, pointing to high inflation under a president with low approval ratings.