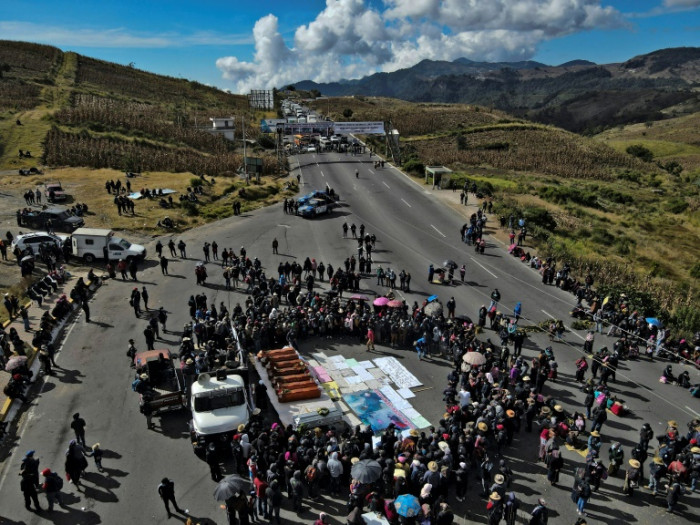 Grieving family members on Monday blocked a major road in Guatemala with the coffins of victims of a weekend massacre by a rival group to draw attention to violence plaguing their indigenous community.

Thirteen people, including four children were killed in the attack near the Mexican border, part of a long-running land feud between members of the Mayan K'iche community from the neighboring municipalities of Nahuala and Santa Catarina Ixtahaucan.

President Alejandro Giammattei called an emergency cabinet meeting on Monday and asked ministers to approve a state of siege in the two municipalities.

Women in traditional indigenous clothing wept as the coffins of seven victims were lined up along the Interamericana highway, which links the area to the capital Guatemala City. Each coffin bore a photo of the victim inside.

"There are no words to describe what these people did," Alonzo Guarchaj, 30, told AFP as he stood next to a coffin containing the remains of his father, an evangelical pastor.

"All we can do is leave everything in the hands of God and vengeance will be his."

Dozens of family members and neighbors of the victims demanded justice and called on the government to bring the conflict to an end.

Jordan Rodas, Guatemala's human rights prosecutor, said the massacre in the village of Chiquix began late Friday when several families from Santa Catarina Ixtahuacan went to gather corn and were "ambushed by a group of men carrying high caliber weapons."

The Santa Catarina Ixtahaucan families were killed and then "burnt inside the truck they were traveling in," according to Rodas. Four children, aged 5 to 16, "were chopped up with machetes."

A police officer was killed and two others were injured in the attack, which continued into Saturday, and a police car was riddled with bullets.

Three men in their 20s armed with M16 rifles were arrested in the area on Sunday, according to authorities. Police said the suspects were from one of the two rival communities and that forensic tests would be conducted to determine if those weapons were used in the attack.

The two communities have fought for control of the forests and water sources in their region for many decades.

"These events are no longer the product of an ancestral land conflict. They are the direct consequence of an illegal armed and organized group that acted against civilians and security forces through an ambush in which many men, women and even children were murdered," said Giammattei.

"I want to be categorical in assuring Guatemalans that the forces of order will pursue those responsible for the attack until they are arrested and brought to justice."

Besides the victims' coffins, protesters also used tree trunks and rocks to block the highway and a line of cars piled up.

Soldiers and police were guarding the approach to Chiquix, some 170-kilometers west of Guatemala City, as fears grew of a new wave of violence in the area.

"We're humans not animals, we have the right to life. These children had a great future," said community leader Catalina de la Cruz.

"There must be justice, those responsible for all of this must be investigated and punished."

Giammattei already declared a state of siege in May 2020 following a previous escalation of violence between the two municipalities, and also set up a commission to try to resolve the conflict.

He said at the time that the conflict had lasted more than 100 years and "cost the lives of many people involved in the supposed defense of their lands."

In August, authorities vowed to increase police presence in the two towns.

Indigenous people, many living in poverty, make up more than 40 percent of Guatemala's almost 17 million population, according to official statistics.
Add Comment