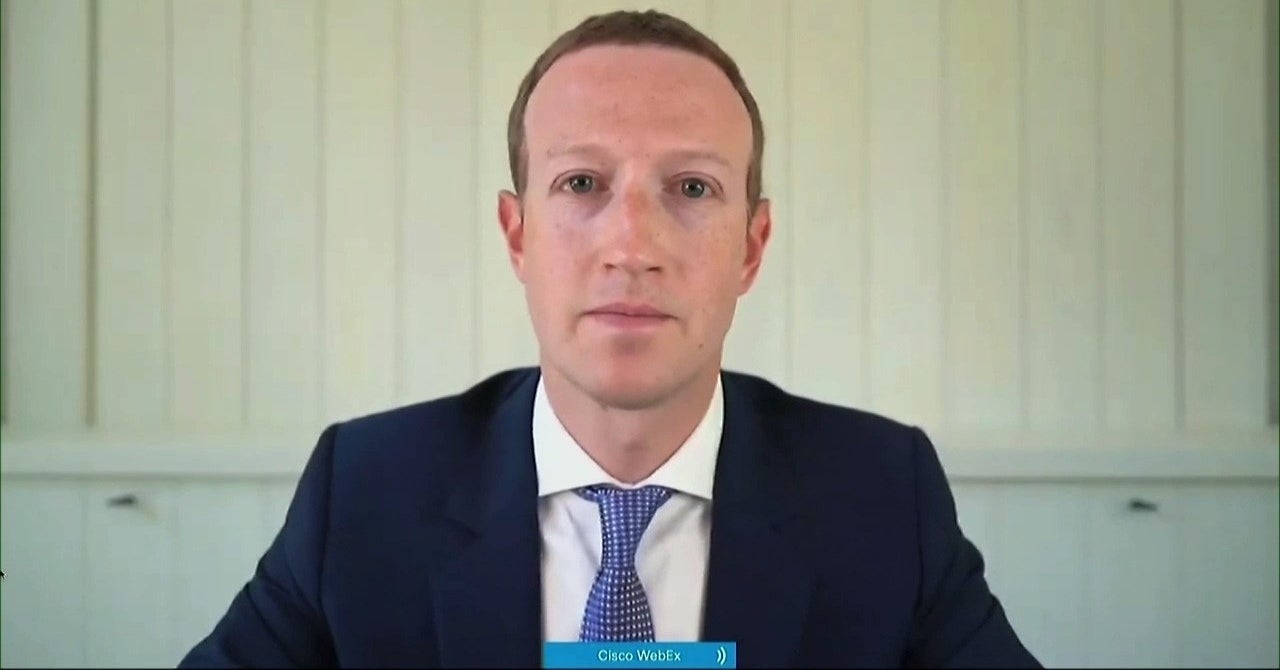 The revelation from Mark Zuckerberg's emails was a flashpoint during the congressional hearing on tech antitrust.

When Facebook CEO Mark Zuckerberg was considering buying Instagram in 2012, he told his company’s CFO that it would neutralize a competitor, according to emails obtained by the House Antitrust Subcommittee and released Wednesday.

The emails, which were first published by the Verge, were cited by House Judiciary Chair Rep. Jerry Nadler while questioning Zuckerberg at a Capitol Hill hearing into antitrust.

Along with Zuckerberg, the top executives of Amazon, Google, and Apple appeared via videoconference to be questioned about the market power of and consumer harm caused by their companies. Republican members of Congress also pressed Zuckerberg and Google CEO Sundar Pichai about alleged anti-conservative bias on their platforms.

The hearing came after the subcommittee spent roughly a year investigating possible antitrust violations by the big technology platforms. As part of the process, the committee gathered records from the companies, including the emails sent between Zuckerberg and Facebook’s former CFO, David Ebersman.

In an email sent in late February 2012, Zuckerberg told Ebersman he was thinking about how much Facebook should pay to acquire smaller competitors like Instagram and Path, which were then upstart social networks. Facebook would eventually acquire Instagram in April that year for $1 billion.

“These businesses are nascent but the networks are established, the brands are already meaningful, and if they grow to a large scale they could be very disruptive to us,” Zuckerberg wrote.

Documents from the Hearing on “Online Platforms and Market Power: Examining the Dominance of Amazon, Apple, Facebook and Google" pic.twitter.com/zcQDpSgLg4

Ebersman replied that it typically made sense to acquire another company for one of three reasons: neutralizing a competitor, acquiring talent, or integrating products.

Zuckerberg said it was a combination of the first and third reasons.

“There are network effects around social products and a finite number of different social mechanics to invent. Once someone wins at a specific mechanic, it’s difficult for others to supplant them without doing something different,” the CEO wrote.

He added that acquiring one of these companies would buy Facebook time to ward off other competitive threats.

“Even if some new competitors springs up [sic], buying Instagram, Path, Foursquare, etc now will give us a year or more to integrate their dynamics before anyone can get close to their scale again,” he added.

“I didn’t mean to imply that we’d be buying them to prevent them from competing with us in any way,” he wrote.

But Nadler seized upon the email exchange as evidence of anticompetitive behavior.

“Facebook saw Instagram as a threat that could potentially siphon business away from Facebook. So instead of competing with it, Facebook bought it,” he said. “This is exactly the type of acquisition the antitrust laws were designed to prevent. It should never have been permitted to happen and cannot happen again.”

Zuckerberg disagreed. “I've always been clear that we viewed Instagram both as a competitor and as a complement to our services,” he said, adding that the FTC did not block the acquisition at the time.

“Congressman, I think the FTC had all these documents and reviewed this and unanimously voted at the time not to challenge the acquisition. I think it looks obvious Instagram would have reached the scale it has today, but at the time it was far from obvious.”

After Zuckerberg cited the FTC in his answer, Rep. David Cicilline of Rhode Island, the subcommittee chair, weighed in to say the FTC’s decision was irrelevant.

“I would remind the witness that the failures of the FTC in 2012, of course, do not alleviate the antitrust challenges the chairman [Nadler] described,” he said.

House Democrats released additional internal Facebook communications about the Instagram acquisition, including one from late January 2012 in which an unnamed employee said “Instagram is eating our lunch.”

Months later, on the day its acquisition of Instagram was made public, Zuckerberg wrote to the employee to acknowledge that “Instagram was our threat.”

“You were basically right,” he said. “One thing about startups, though, is you can often acquire them.”

Documents from the Hearing on “Online Platforms and Market Power: Examining the Dominance of Amazon, Apple, Facebook and Google" pic.twitter.com/WyZFapAE29

Aside from the previously unreleased Facebook emails about Instagram, the hearing did not provide many new revelations. Democratic members of the subcommittee questioned the CEOs about their products and businesses, while many Republicans pressed them on alleged anti-conservative censorship.

In one exchange, Rep. Frank Sensenbrenner of Wisconsin, the ranking Republican on the subcommittee, asked Zuckerberg about action taken against Donald Trump Jr.’s account after he had shared a video filled with potentially harmful falsehoods about the coronavirus.

Zuckerberg pointed out that the account and incident in question happened on Twitter, not on any of Facebook’s products. "So it's hard for me to speak to that,” he said.