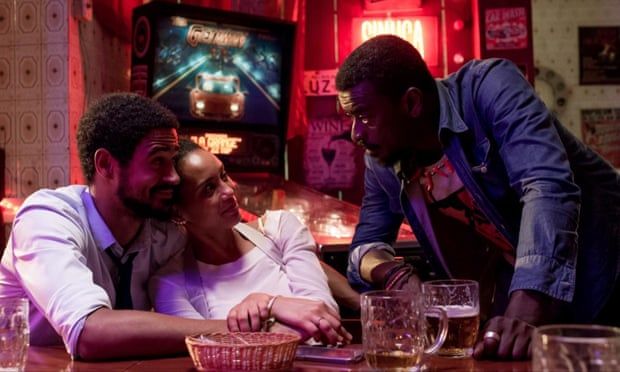 Lázaro Ramos’s debut, in which a hardline government issues orders to deport Brazil’s Black population to Africa, moves from satire to survivalism

A chilling believability creeps into this dystopian debut from actor-turned-director Lázaro Ramos that’s hard to shake off. It’s set sometime in the near future, where a hardline government in Brazil issues an order to deport the country’s entire Black population “back to Africa”. What’s so unnerving is that the order is the latest in a series of policies to make Brazil a hostile environment for people of colour – and these policies don’t feel a million miles from reality (from say the Windrush scandal or asylum-seeker flights to Rwanda, Trump’s wall or Jair Bolsonaro’s racism).

It begins in satirical mode. Antônio (Alfred Enoch) is a thoughtful young human rights lawyer filing injunction after injunction against a new government department. This is the Ministry of Return, which has introduced a voluntary scheme offering Black people a one-way ticket to an African country of their choice. (The script is vague on immigration arrangements with African nations – and it’s let down in a few other places by haziness and implausibility.) Ramos sends up the stupidity of this racist policy in a sequence of funny interviews with would-be volunteers. Lawyer Antônio, worried but with no clue of the chaos to come, tells his wife, hospital doctor Capitu (Taís Araújo), that if it all kicks off, they should meet back at their apartment.

The film shifts into survival movie mode as the government orders compulsory deportation. As squads of baton-wielding, taser-carrying military police hit the streets rounding up Black people, Antônio and his cousin André (Seu Jorge) hole up in Antônio’s apartment. Capitu takes refuge in an “Afro-Bunker”, one of a network of secret underground communities. What’s so terrifying about the film is how convincingly Ramos paints the fragility of rights: a few steps is all it takes. As one character observes: “Do we see history as it’s happening?”