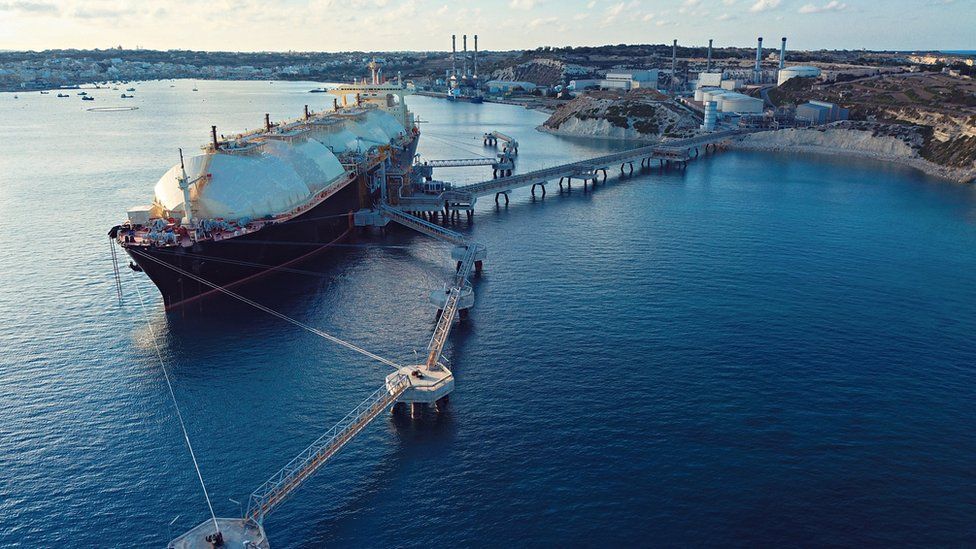 EU signs US gas deal to curb reliance on Russia

The US and the EU have announced a major deal on liquified natural gas, in an attempt to reduce Europe's reliance on Russian energy.

The agreement will see the US provide the EU with extra gas, equivalent to around 10% of the gas it currently gets from Russia, by the end of the year.

The bloc has already said it will cut Russian gas use in response to Russia's invasion of Ukraine.

Russia currently supplies about 40% of the EU's gas needs.

The new total will represent around 24% of the gas currently imported from Russia.

The eventual aim is for the US and international partners to provide about 50 billion cubic metres per year to the EU.

The deal was announced on Friday during a three-day visit by US President Joe Biden to Brussels.

He said the long term benefits of the deal would outweigh the short term pain that reducing Russian gas supplies would cause.

"I know that eliminating Russian gas will have costs for Europe, but it's not only the right thing to do from a moral standpoint, it's going to put us on a much stronger strategic footing."

President von der Leyen said: "We want, as Europeans, to diversify away from Russia towards suppliers that we trust that are friends and that are reliable."

She pointed out that the target 50 billion cubic metres per year "is replacing one-third already of the Russian gas going to Europe today. So we are right on track now to diversify away from Russian gas."

The EU gets 40% of its gas from Russia. If it's to wean itself off that dependency, it needs to get its energy elsewhere.

The question is, where from?

Gas is already piped from Norway - but those pipelines are already operating at maximum capacity. The EU gets relatively little from the North Sea.

New supplies will have to come from further afield, in the form of LNG - gas that's been chilled and liquified.

But there's already intense competition for LNG supplies from countries such as Algeria and Qatar, and that's been pushing up prices.

The 50 billion cubic metres of gas a year from the US - more than double the current quantity - would certainly be welcome.

But it still wouldn't fill the gap if Russian supplies were removed.

There are also question marks over how much gas the US can supply, how quickly it can increase exports to the EU - and how much those shipments will cost.

The EU has been enjoying cheap gas for many years - but now it seems to have accepted that era is coming to an end.

Energy prices were already rising before the invasion as economies started to recover from the Covid crisis.

The Ukraine invasion prompted the EU to pledge to cut Russian gas use by two-thirds this year by hiking imports from other countries and boosting renewable energy. 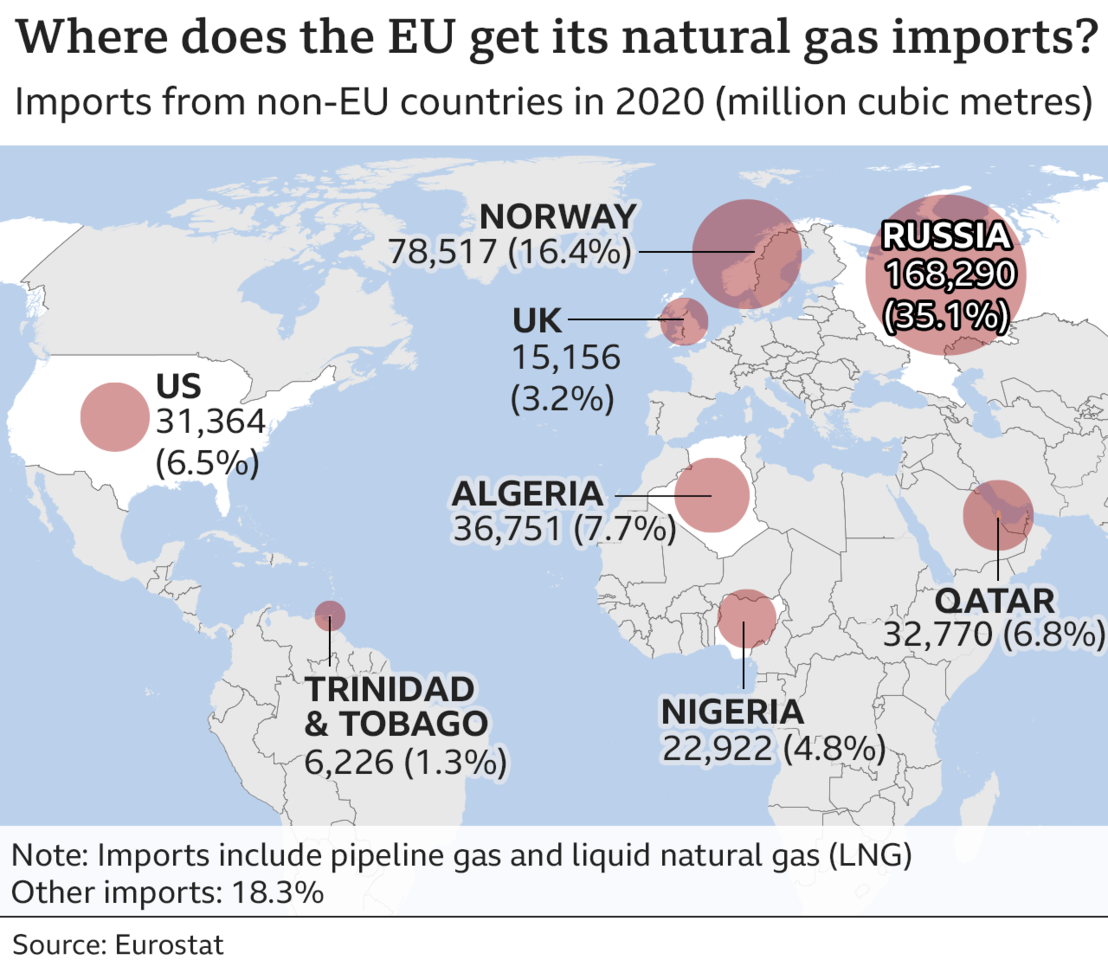 The White House said that greater energy efficiency can be immediately achieved through increasing the use of smart thermostats and heat pumps.

The EU's goal is to save 170 billion cubic metres by 2030 through energy efficiency and by using renewable energy.

That 170 billion on top of the planned 50 billion of additional gas from the US and other countries means Europe's reliance on Russian gas could be replaced by 2030.

In response to Russia's invasion of Ukraine, the US is banning all Russian oil and gas imports and the UK will phase out Russian oil imports by the end of 2022.

The EU has said it will switch to alternative supplies and make Europe independent from Russian energy "well before 2030".

Germany has put on hold permission for the Nord Stream 2 gas pipeline from Russia to open.

Meanwhile in the UK petrol prices have hit record highs as oil and gas costs soar.

Oil jumped to $139 a barrel at one point earlier this month, the highest level for almost 14 years, while wholesale gas prices for next-day delivery more than doubled.