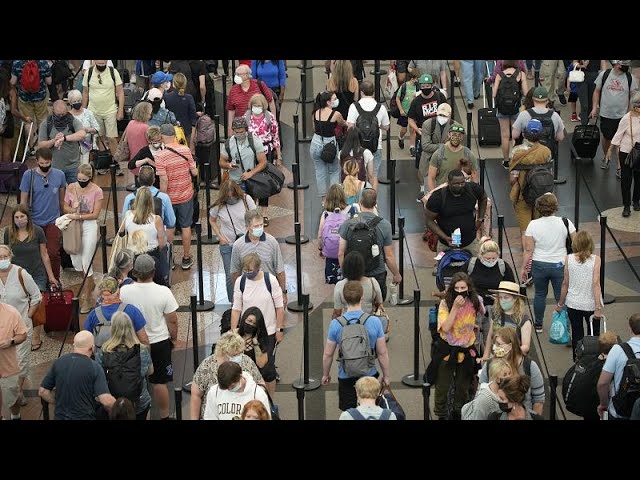 EU countries advised to reintroduce restrictions on US travellers

Brussels has recommended EU members reintroduce restrictions on US travellers entering their countries.

The decision comes as the Delta variant is sending infections and hospitalisations soaring. The US is now registering more than 1,000 new cases per day, the highest level since March.

The US' vaccination campaign has stalled in recent months and fallen significantly behind the EU's inoculation efforts. More than 57% of the EU's population is fully vaccinated against COVID-19, compared to 52% in the United States.

National representatives met on Monday afternoon to discuss and update the EU's list of safe travel, a process that takes place every two weeks.

The Council of the European Union decided to remove from the list six countries (Israel, Kosovo, Lebanon, Montenegro, North Macedonia and the United States), arguing their current rate of coronavirus infections exceeds the agreed threshold of 75 new cases per 100,000 inhabitants over the last 14 days.

The US was first included in the safe list on June 18. The inclusion was followed by weeks of intensive lobbying from European officials who put pressure on their American counterparts to reciprocate and open up their doors for EU citizens.

The White House stood firm and refused to allow entry, all the while vaccinated US tourists entered Europe to enjoy their summer holidays.

China is also included, although this is subject to reciprocity. The regions of Hong Kong and Macao are also green-listed.

Removal from the EU's safe list means that non-essential travel again becomes subject to temporary travel restrictions, such as testing, quarantine or a downright ban.

However, observance of Monday's recommendation is not mandatory. Individual EU countries are entitled to unilaterally decide whether they keep their borders open to US travellers.

The Council had previously recommended the lifting of restrictions to fully vaccinated travellers, an exemption that still applies to residents of the six removed countries. This decision was also non-binding and its implementation is fragmented across the bloc.

Since the outbreak of the pandemic, Brussels has pleaded with member states to coordinate the management of external borders and travel restrictions, which remain the exclusive competence of national governments.

Although coordination improved as the severity of the pandemic eased, some EU countries, particularly the southern countries that rely heavily on tourism, opted for a more welcoming approach and opened the doors for any non-EU tourist who could show proof of vaccination or a negative test. Other states opted for more restrictive measures, especially for the unvaccinated.

As of today, the only legal guarantee to avoid any kind of travel restriction is to be an EU resident in possession of the EU Digital Covid Certificate. Those who fall outside this category face a myriad of rules and requirements when travelling into and across the bloc.