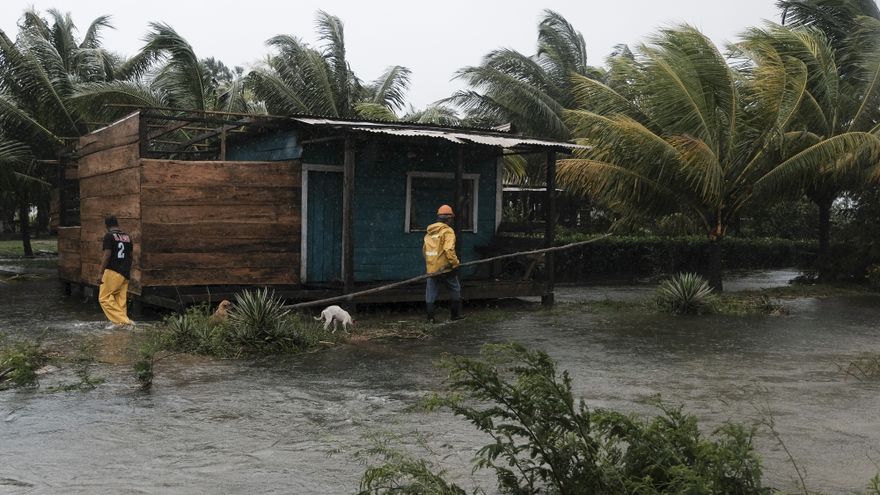 Eta hits the Nicaraguan Caribbean; one dead in Honduras

The eye of Hurricane Eta continued to move slowly through the Nicaraguan Caribbean and moving inland from the Central American nation with devastating winds and rains that have already destroyed roofs of houses and caused rivers to overflow. In Honduras, where the effects are felt, authorities reported the death of a 12-year-old girl.
The Category 4 hurricane had sustained winds of 220 kilometers per hour (140 miles), according to the US National Hurricane Center, which considers it an "extremely dangerous" hurricane.

As of Tuesday afternoon, Era was still located on the Caribbean coast of Nicaragua , about 25 kilometers (15 miles) south-southwest of Puerto Cabezas, or Bilwi, and was moving west at about seven kilometers per hour (five miles).

Although Nicaragua is for now the Central American country most affected by the direct winds from Eta, its effects extend to Honduras, where heavy rains that have caused landslides are reported.

In Honduras, the head of the Incident Command System of the Permanent Contingency Commission, Marvin Aparicio, told The Associated Press that a 12-year-old girl died after a landslide in the city of San Pedro Sula.

In Managua, the Director of Meteorology, Marcio Baca, pointed out that the hurricane was moving parallel to the Nicaraguan Caribbean coast. "Its center is practically on the coastline, which is causing the eye of the storm to be seen in a diffuse way," he explained.

The Nicaraguan government reported that so far no deaths or injuries have been reported in Puerto Cabezas, a town in the northern Caribbean that felt the impact of Eta very early and from where at least 20,000 people have been evacuated to shelters.

According to the authorities, the winds caused minor material damage, such as detached roofs of houses, trees uprooted and damage to the power lines, although floods are not ruled out in the coming hours.

The director of the state Disaster Prevention and Attention System (Sinpred), Guillermo González, declared in an interview with the official television channel 4 that so far no deaths or injuries have been reported in Bilwi, a city of about 60,000 inhabitants. the one that the hurricane approached.

González said that some 20,000 people were evacuated and sheltered in safe places - private houses, churches, schools - before the start of the rains. The Bilwi regional hospital was also evicted and its occupants transferred to the building of a technological institute.

Although González praised "all the articulation achieved to preserve lives," he warned that "the danger has not ended" because in the next 36 hours the hurricane will move over the mountains of northern Nicaragua. There, rains could affect many rural communities in the provinces of Jinotega, Nueva Segovia and Chinandega, where the alert state is maintained.

For her part, the vice president and first lady, Rosario Murillo, reported that land access to Puerto Cabezas has been blocked since Monday night, as the passage over the Wawa River, to the west, which communicates with that town, is closed.

Although the river has not overflowed, journalists who traveled to the area indicated that the rustic barge that serves as a ferry for the crossing of people and vehicles is not working due to the onslaught of strong winds in the area.

Murillo, who speaks live on official television every noon, reiterated that so far the damage caused by Eta in Nicaragua "is not significant" and raised prayers to God that "the winds decrease and that the Father's hand moves that hurricane and get it out of there ”.

The storm is expected to spend the week sweeping across Central America and dumping large amounts of water.

Central and northern Nicaragua, as well as much of Honduras, could receive between 380 and 635 millimeters (15 to 25 inches) of rain, which could reach 890 millimeters (35 inches) at some points. Downpours are also expected in eastern Guatemala, southern Belize and Jamaica, according to meteorologists.

The storm surge could carry the water inland 4.5 meters (15 feet) beyond normal tides off the coast of Nicaragua, experts say.

The amount of rain drew comparisons to Hurricane Mitch in 1998, one of the deadliest in history. An archival report from the US National Hurricane Center estimates that Mitch killed more than 9,000 people.

Eta tripled in strength in about 24 hours and is the eighth system this Atlantic storm season to meet the definition of rapid intensification and the fifth to become a major hurricane. Over the past two decades, meteorologists have expressed growing concern about storms gathering strength so quickly.

Eta is the 28th named storm of the season in the Atlantic, equaling the 2005 record. However, it is the first time the Greek letter name Eta has been used because in 2005 meteorologists concluded after the end of the season that a storm that wasn't baptized should have been named.

There is still a month of hurricane season left, until November 30. In 2005, Storm Zeta formed in late December.
Add Comment