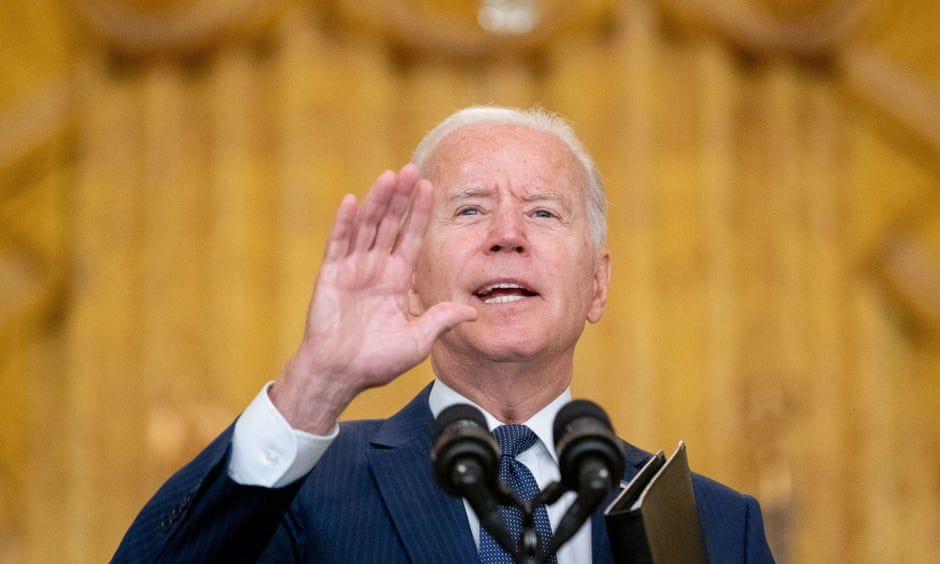 For Democrats in tight re-election races, being photographed with a president whose approval rating hovers at 40% is a risk

With a handshake and brief embrace, congresswoman Abigail Spanberger welcomed Joe Biden to her Virginia district last Thursday. The event was an opportunity to highlight the administration’s plans to lower the cost of prescription drugs, but it also provided an opportunity for the US president to promote the members of his party ahead of the midterm elections in November.

“In every chapter in her career, in every chapter, she’s always been about one thing: service,” the president said of Spanberger, a Democrat whose competitive re-election race is on the front line of the battle for control of the House.

It is a crucial effort: Democrats already face a punishing political climate as they defend their paper-thin majorities in the House and Senate. The president’s party typically loses seats during the midterm elections and a president’s popularity is a key variable in determining the extent of those losses.

Widespread economic discontent and frustration over the pandemic have battered Biden’s approval ratings, now hovering just above 40%, according to public polls. Underscoring the deep challenges confronting his presidency, Biden arrived in Culpepper, Virginia, hours after the release of another grim economic report, showing inflation rising by 7.5% over the last year, its highest level in 40 years.

The present reality poses a dilemma for some Democrats: embrace an unpopular president or shun the leader of their party.

Republicans have called the choice the “burden of Biden”, targeting members who appear with him, like Spanberger, over their support for the president while accusing those who don’t of avoiding him.

Practically a perennial midterm predicament for the party in power, the question of whether to put daylight between vulnerable candidates and Biden comes as he prepares to ramp up travel outside Washington. This week he will travel to Ohio, where Democrats are trying to flip a Senate seat.

Some Democrats are hopeful the personal appeal of Biden – known as the consummate retail politician – will help them sell their agenda and improve his party’s prospects later this year.

“If you are trying to distance yourself from Biden, you’re doing it wrong,” said Lanae Erickson, senior vice-president at the moderate thinktank Third Way.

Many of the most fiercely contested House races are anchored in the suburbs, which powered the party’s victories during the Trump years but where Democrats have struggled recently.

Erickson said Biden remains the party’s best spokesman. A visit from him, she continued, telegraphs to swing voters that “this is the party of Joe Biden, it’s not the party of Bernie Sanders, and that’s what we’re offering when it comes to November”.

In recent weeks, some Democrats have not attended events where Biden is speaking, giving grist to Republicans eager to amplify the narrative that they are avoiding him.
Advertisement

On a trip to Georgia, where Biden delivered a major speech on voting rights, gubernatorial candidate Stacey Abrams, a prominent voting rights advocate, was not in attendance, citing a scheduling conflict.

In Pittsburgh last month, Pennsylvania attorney general Josh Shapiro, the probable Democratic nominee in the race for governor, did not attend the president’s speech on infrastructure – also due to an apparent scheduling conflict.

Both insisted at the time politics had no bearing on their decision. Abrams and Biden flatly rejected any notion of friction.

But there are other signs that Democrats in difficult races are trying to put daylight between themselves and the president. Asked whether he would accept Biden’s help, Beto O’Rourke, who is vying to become the next governor of Texas, told reporters he was “not interested” in receiving campaign assistance from anyone outside his state. Other Democrats have hedged, offering neither an emphatic yes or a definitive no.

An analysis by Axios, using data compiled by Quorum, found that many at-risk Democrats avoided any mention of the president on their official campaign accounts since 1 September, when Biden’s approval began a precipitous decline after the chaotic withdrawal of US troops from Afghanistan.

Still, several Democrats in key races have welcomed the president. Georgia senator Raphael Warnock, who faces a difficult re-election fight, appeared alongside Biden during his voting rights speech. Congressman Conor Lamb, a candidate for Senate in Pennsylvania, was in the audience in Pittsburgh when Biden mistakenly referred to him as “senator”.

In December, Kansas congresswoman Sharice Davids flew with Biden on Air Force One to her district, where they touted the benefits of the bipartisan infrastructure law. And he also appeared at an event with Michigan congresswoman Elissa Slotkin to push for passage of the law.

Presidential visits often drive fundraising and attract media attention.​ An appearance by Biden could help amplify Democrats’ economic agenda while serving to dispel concerns about his age, said Mike Noble, a pollster in Arizona, where senator Mark Kelly is defending his seat in one of the marquee races of the cycle.

A recent survey of Arizona voters, conducted by OH Predictive Insights, Noble’s polling and research firm, found that the economy had overtaken immigration as a top priority for voters in the border state. At the same time, approval of his handling of the economy and the pandemic had fallen sharply.
Advertisement

“You can either be reactive or proactive,” he said. “And we’re seeing that being reactive has not been great for his numbers here.”

At a press conference last month, Biden said he planned to be more “deeply involved” in the midterm elections. And though he expressed an eagerness to travel on behalf of his party, it is highly unlikely Biden would appear anywhere he is not wanted.

“We’re going to be raising a lot of money. We’re going to be out there making sure that we’re helping all of those candidates,” he said. “And scores of them have already asked me to come in and campaign with them, to go out and make the case in plain, simple language as to what it is we’ve done, what we want to do, and why we think it’s important.”

But it is not easy. 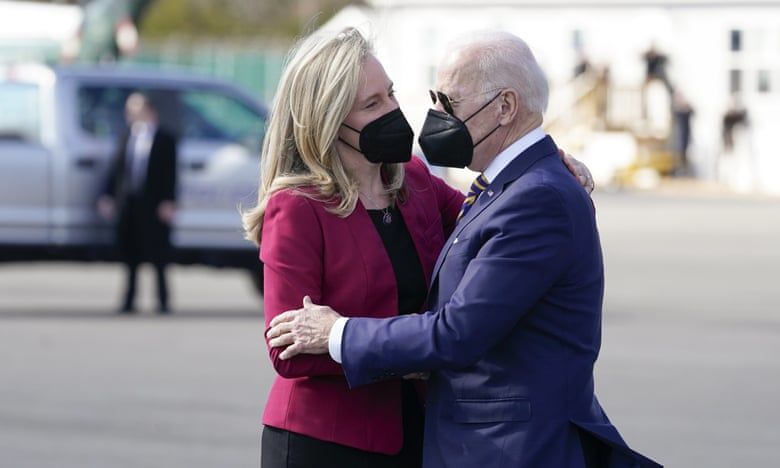 Joe Biden with Abigail Spanberger in Virginia this week.

Once popular with a wide cross-section of voters, Biden’s appeal among conservatives has all but vanished as he attempts to lead a divided America out of a pandemic and economic crisis. His appearances almost always draw protesters, often waving vulgar signs as Donald Trump continues to spread lies about the results of the 2020 election.

Alarming Democrats is his slipping support among critical parts of the party’s coalition, including Black, Latino, young and female voters deflated by his failure to enact a bold agenda and disappointment that life remains far from “normal” more than a year into his presidency.

The collapse of legislative efforts to protect voting rights and enact police reform should worry Democrats more than an appearance by the president, said Cliff Albright, a co-founder of the Atlanta-based advocacy group Black Voters Matter.

In a recent survey by the Atlanta Journal-Constitution, nearly a quarter of Georgia voters named voting and elections as their top priority, the highest percentage of any issue, including the economy. Concern was especially pronounced among Black voters, whose disapproval of the president soared from just 8% in May to 36% in January. Even a marginal drop in Black voter turnout in November could spell trouble for Democrats in November, particularly in Georgia, where Biden won by less than half a percentage point.

“We didn’t vote for him because we thought he was a great speaker or a great motivator,” Albright said. “We thought he would be able to govern and help pass legislation.”

Four years ago, voter fury against Trump lifted Spanberger to victory over Republican David Brat, an arch-conservative. Spanberger has been a top Republican target ever since, but she held on in 2020, defeating her Republican challenger by less than two percentage points.

This year she will run in a district that has been dramatically redrawn, and now tilts more heavily in her favor. Whereas Biden narrowly won her district in 2020, it’s projected he would have won the new district by seven points.

But the increased margin is little comfort after Democrats’ stunning defeat in Virginia’s gubernatorial election last year, when Republican Glenn Youngkin stormed to victory in the state, which Biden won by 10 percentage points in 2020.

The shocking losses in Virginia, thought to have turned reliably blue, came amid Democratic infighting over the size and scope of the president’s domestic agenda, which remains stalled in the Senate.

After the interview was published, Spanberger said she got a call from the White House. When Biden came to the phone, he teased: “Hello, Abigail. It’s president Roosevelt.”

Speaking with reporters before Thursday’s event in Culpepper, Spanberger said she welcomed the opportunity for Biden to hear directly from her constituents, like ​​Joshua Davis, a 12-year-old with diabetes who introduced him.

At this stage in the cycle, Larry Sabato, director of the Center for Politics at the University of Virginia, said the choice to appear with the president in a part of the state he won to discuss a part of his agenda that is wildly popular was an “obvious one” for Spanberger. He cautioned that much could change before November.

“But if this were October, with these kinds of ratings,” Sabato said, “I think she’d have a scheduling conflict.”