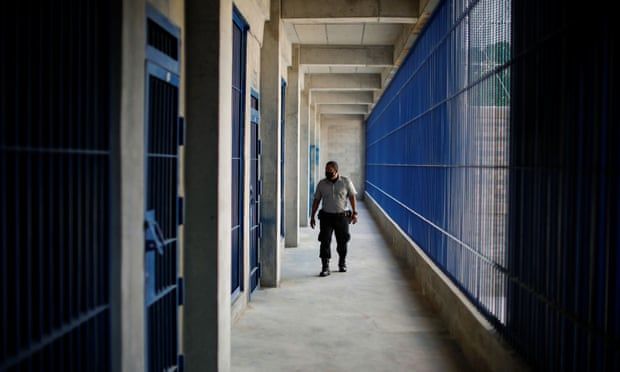 The government declared a state of emergency and locked down prisons after 87 murders were committed Friday, Saturday and Sunday. By comparison, there were 79 homicides in the entire month of February.

Authorities have blamed the killings on gang members, and on Monday authorities said soldiers and police had raided gang strongholds around San Salvador.

President Nayib Bukele wrote that those detained will not be released, and ordered that food for gang inmates at Salvadoran prisons would be reduced to two meals per day, apparently to stretch current food supplies to feed the new detainees as well.

“Don’t think they are going to be set free,” Bukele wrote in his Twitter account. “We are going to ration the same food we are giving now (to inmates).”

“And if the international community is worried about their little angels, they should come and bring them food, because I am not going to take budget money away from the schools to feed these terrorists,” the president wrote.

El Salvador’s congress granted Bukele’s request to declare a state of emergency early Sunday amid the wave of killings.

The state of emergency suspends constitutional guarantees of freedom of assembly and loosens arrest rules for as much as thirty days, but could be extended. The decree allows suspects to be detained without a lawyer for up to 15 days, and allows police to search cell phones and messages.

The homicides appeared linked to the country’s notorious street gangs, who effectively control many neighborhoods in the capital. The National Police reported they have captured five leaders of the Mara Salvatrucha or MS-13, who they claimed ordered the weekend killings.

Bukele previously ordered the head of the country’s prisons to carry out an immediate 24/7 lockdown of gang inmates in their cells.

“They are not to go out even to the patio” of prisons, Bukele wrote, adding “a message to the gangs: because of your actions, now your homeboys will not see even one ray of sunlight.”

While Bukele has tried to project a tough attitude on crime, the country’s enormously powerful street gangs have proved a double-edged sword for him.

“We must remind the people of El Salvador that what is happening now is due to the negligence of those who protected criminals,” the conservative Arena party said in a statement.

That was an apparent reference to a December report by the US Treasury Department that said Bukele’s government secretly negotiated a truce with leaders of the gangs.

The US government alleges Bukele’s government bought the gangs’ support with financial benefits and privileges for their imprisoned leaders including prostitutes and cellphones. Bukele has vehemently denied the accusations.

The explosive accusations cuts to the heart of one of Bukele’s most highly touted successes in office: a plunge in the country’s homicide rate.

They also raised tensions between Bukele and the Biden administration. After the new congress removed the attorney general and the justices of the constitutional chamber of the supreme court in May, the US government expressed concern over the direction of the country.

Bukele enjoys extremely high popularity. He stepped into a political vacuum left by discredited traditional parties from the left and right.
Add Comment