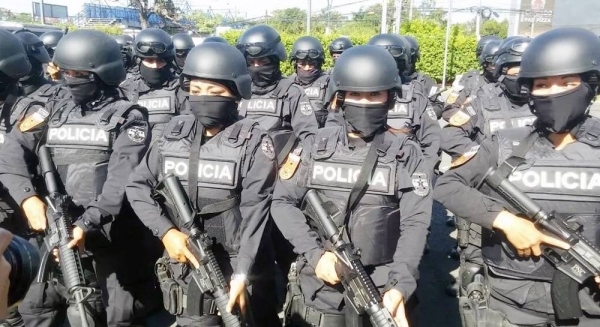 El Salvador's defense minister has praised the extension by Congress of emergency measures which he says are having a "positive" effect in the battle against rampant gang violence.
René Merino said that more than 17,000 suspected gang members had been arrested since the state of emergency was declared a month ago.

On Sunday, Congress extended the measure by another 30 days. It came into force on March 27 after 62 people were murdered in one day.

The emergency measures have been controversial as they limit some constitutional rights, such as allowing the security forces to arrest suspects without a warrant.

The sentences for convicted gang members have also been raised to a maximum of 45 years in jail.

Defense Minister Merino said that crimes such as extortion had dropped since the emergency measures were introduced.

"The aim is to make these gangs disappear altogether from El Salvador," he said in a televised statement.

He added that "the honest population is very satisfied with the work we're doing against the gangs" but did not say if any polls had been carried out which supported his statement.

Rights advocates have been highly critical of the mass arrests carried out in the past month.

The UN's Office of the High Commissioner for Human Rights (OHCHR) warned earlier this month that thousands of Salvadorans had been detained without an arrest warrant and that some had reported being subjected to "cruel, inhuman, or degrading treatment".

OHCHR spokesperson Liz Throssell said that changes to El Salvador's criminal procedure also meant that "criminal trials could now be held in absentia, in the case of alleged gang members, or presided over by so-called 'faceless; judges whose identity remained 'confidential'".

Merino said on Monday that those arrested who were found to have no links to gangs would be freed.

"This is going to keep happening, that we stop someone, we question that person and then we notice that the person has no links [to gangs] and then we set that person free."

"The people need to know that if they're not involved in anything bad, nothing bad will happen to them," Merino said.

But rights group Human Rights Watch has condemned tweets by the Salvadoran police which showed suspects being arrested and said that the government's strategy "seems to be 'first arrest, then tweet, and investigate later'".

Homicide figures had been dropping since Nayib Bukele was elected president in 2019. The 40-year-old campaigned on a promise to tackle rampant gang violence and political corruption.

But there has been a rise in homicides since the beginning of this year, with March 26 standing out as having been the most deadly day in decades.
Add Comment