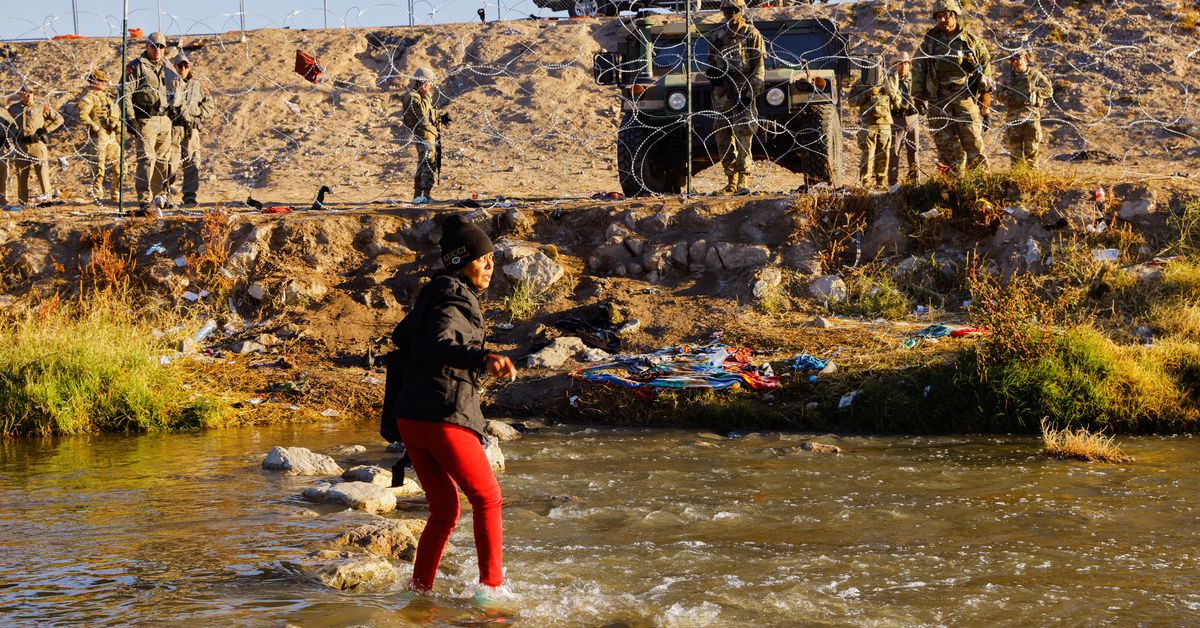 Frustration among migrants at U.S.-Mexico border as COVID restrictions remain

When Vladimir Castellanos learned that COVID-19 restrictions blocking him and other migrants from claiming asylum at the U.S. border with Mexico may not be terminated this week, he said he felt deceived.

Castellanos and his brother are Venezuelans, and they were among dozens of migrants gathered on both sides of the Rio Grande on Monday night in Ciudad Juarez, Mexico, and El Paso, Texas, with some lighting small fires to keep warm as temperatures dropped toward freezing.

They had traveled there in anticipation that the COVID-19 restrictions, known as Title 42, would be lifted on Wednesday as ordered by a U.S. court. Title 42 allows U.S. authorities to rapidly expel migrants to Mexico and other countries without a chance to seek U.S. asylum.

But in a last-minute move, the U.S. Supreme Court on Monday allowed Title 42 to remain in place temporarily while a legal challenge by Republican state attorneys general seeking to extend the measures is decided.

"I view it as a joke, to give us hope and then, like a child, trick us and tell us that they are going to postpone," Castellanos said, adding that it was unfair that migrants from other countries could enter the United States while Venezuelans were barred.

Since Biden took office in January 2021, about half of the record 4 million migrants encountered at the U.S.-Mexico border have been expelled under Title 42 while the other half have been allowed into the country.

The rise in people crossing the border has overwhelmed some border communities. The city of El Paso, Texas, declared a state of emergency over the weekend as hundreds of migrants were on the streets.

The migrants interviewed by Reuters were a handful of the estimated tens of thousands waiting on the Mexican side of the border for a chance to cross.

Early on Tuesday, dozens of Texas National Guard troops in camouflage uniform and helmets fanned out at the border between Ciudad Juarez and El Paso in armored cars. The troops, part of a larger deployment of 400 personnel, unspooled long lengths of concertina wire to create a barrier alongside the river.

Title 42 was originally issued in March 2020 under Republican former President Donald Trump at the beginning of the COVID-19 pandemic. The administration of Biden, a Democrat, left it in place for more than a year and expanded it in October to include Venezuelans in the expulsions to Mexico while also allowing up to 24,000 Venezuelans to enter the United States by air if they apply from abroad.

Still, the Biden administration says it wants Title 42 to end after U.S. health authorities said in April that the order was no longer needed to prevent the spread of COVID-19.

A federal judge ruled in November that Title 42 was unlawful and ordered it lifted on Dec. 21, siding with asylum-seeking migrants who sued the government over the policy.

But a group of 19 states with Republican attorneys general mounted a legal challenge to keep Title 42 in place by seeking to intervene in the suit. The U.S. Supreme Court on Monday said the restrictions could temporarily remain in place to give time for parties in the case to respond to the Republican request.

The Biden administration said on Tuesday it is planning on "surging resources" to the border and using existing legal authorities "to implement new policies in response to the temporary disruption that is likely to occur whenever the Title 42 orders end."

The Supreme Court now will decide whether to halt the policy while the states' legal challenge plays out.

Some Venezuelans on the Mexican side of the border were still holding out hope for a change.

"I can't give up so easily," said 26-year-old Venezuelan migrant Alexis Farfan, who has been staying at an LGBTQI+ shelter in Tijuana since he was expelled from the U.S. earlier this month. "I trust in God that I will get to the other side."

Oh ya 45 days ago
If the government will not protect the border then the citizens should arm up and do so. Tell CBP either you are part of the solution or part of the problem
View all comments (1)Add comment