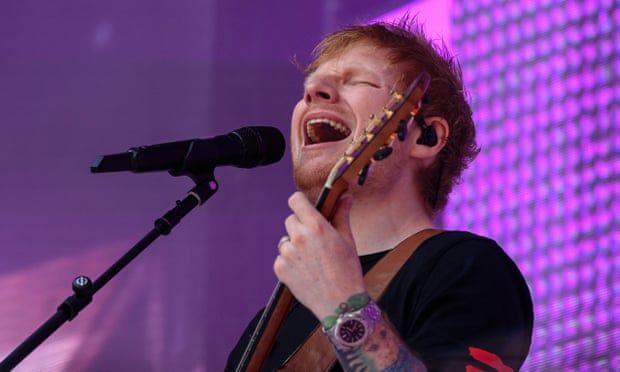 The pop star’s single Bad Habits was also the most-played song of last year, according to new data from music licensing company PPL

Ed Sheeran was the most-played artist in the UK last year according to new data from music licensing company PPL, which calculates usage by radio stations, TV channels and public locations that play recorded music in order to distribute royalties.

Sheeran also had the most-played track of 2021 in Bad Habits, from his fourth album, =. He previously held the PPL double in 2017, when he was the year’s most-played artist and his song Shape of You dominated public life.

Peter Leathem, chief executive officer at PPL, said that, over the last five years, Sheeran’s success was “a testament to the quality of his output [and] the strength of UK music at a time when the global music landscape is more competitive than ever”.

Nipping at Sheeran’s heels for cultural dominance, however, is Bedford-born pop star Tom Grennan, who was recently hospitalised after being attacked in New York. His collaboration with Calvin Harris, By Your Side, was the second biggest song of 2021; his solo single Little Bit of Love was the third.

Reflecting how streaming has given the biggest hit songs a longer tail than ever, the fourth biggest song of last year, the Weeknd’s Blinding Lights, was in fact released in 2019. Its placing here adds to a litany of records: in November 2021, it was ranked as the biggest Billboard Hot 100 hit of all time. 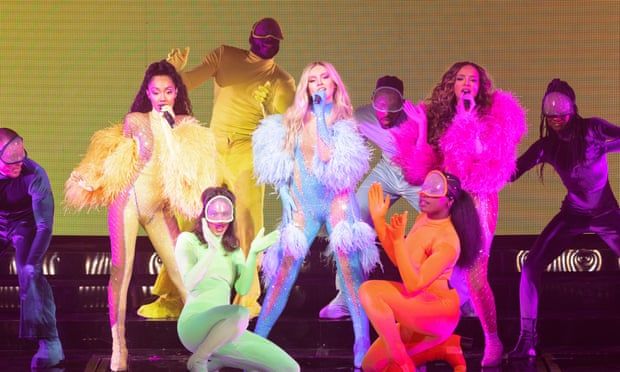 Little Mix on their farewell tour in April.

Also sticking around was Miley Cyrus’s Midnight Sky, originally released in 2020. It is the only solo song by a female artist in the Top 10 most-played tracks of 2021. Heartbreak Anthem, Little Mix’s collaboration with Galantis and David Guetta placed at No 7, and Joel Corry, Raye and Guetta’s hit Bed placed at No 10.

The most-played artists charts revealed a closer split between genders, with 60:40 male to female. Little Mix have been in the Top 10 for each of the last five years; this year they are No 4, which may mark their final placing in the list given their recent hiatus. At No 5, Coldplay have featured in the artist Top 10 eight times in the past 10 years, placing top in 2016 and 2012.

Pink appears at No 10 on the artists chart, reflecting another PPL win for the US pop star: last year, the organisation named her the UK’s most-played female artist of the 21st century.

2. Calvin Harris – By Your Side ft Tom Grennan