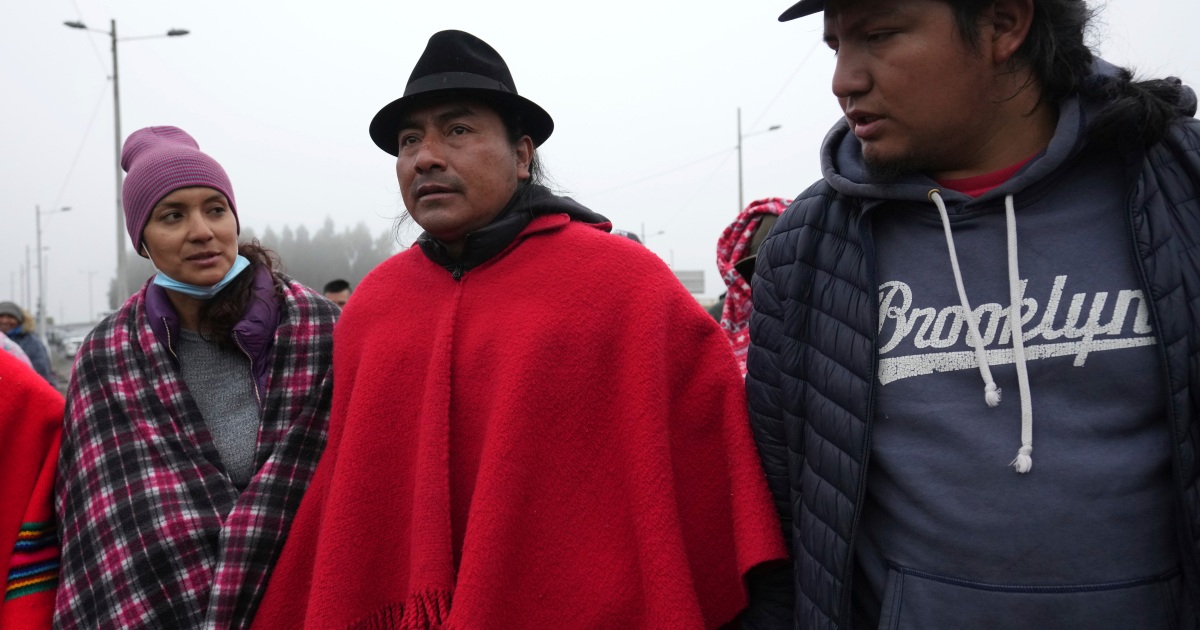 Leonidas Iza had been arrested on suspicion of ‘sabotage’ amid nationwide anti-government protests.

Ecuadorian Indigenous leader Leonidas Iza has been released from detention, less than a day after he was arrested on what the interior ministry described as suspicion of “sabotage” amid nationwide anti-government protests that have sprawled across the Latin American country since Monday.

Iza, a leader of the powerful Confederation of Indigenous Nationalities of Ecuador (CONAIE), addressed supporters, who had gathered outside the military base where he had been held in Latacunga, on Tuesday.

“We are not going to be demoralised,” he said via a loudspeaker.

“Long live the struggle!” the crowd shouted in response.

The Indigenous leader still must “appear periodically before the prosecutor’s office” before his trial, his lawyer told the AFP news agency. He faces up to three years in prison.

Earlier in the day, Ecuadorian police in riot gear clashed with protesters calling for Iza’s release. Members of the Indigenous movement said several people were injured when authorities deployed tear gas, while police said their officers were attacked and some were being held captive. 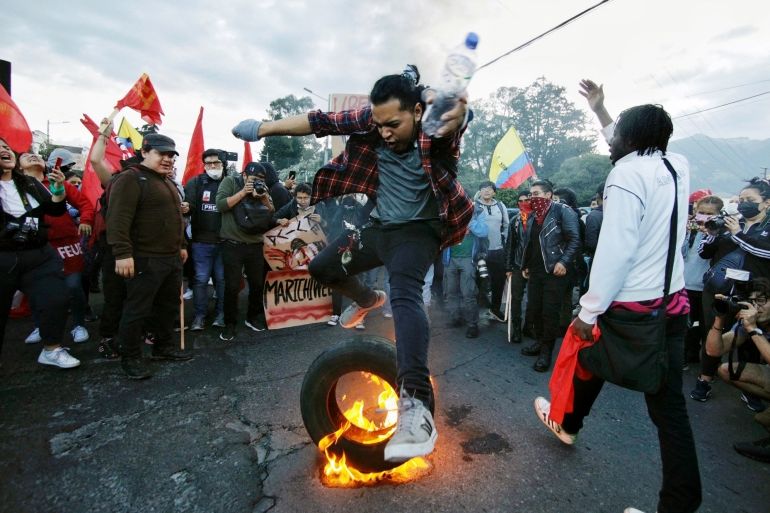 A university student leaps over a burning tyre during a demonstration against the government of President Guillermo Lasso in downtown Quito, Ecuador

Since Monday, wider protests – called for by CONAIE to decry rising fuel prices and living costs – have swept across the country.

Authorities said demonstrations had taken place in at least 10 of Ecuador’s 24 provinces. Amid the unrest, demonstrators blocked roads with burning tires and barricades of sands, rocks and tree branches, partially cutting off access to the capital Quito, where police vehicles were set ablaze.

Iza, a leader of the Kichwa-Panzaleo community, had been arrested in Pastocalle, just south of Quito. A lawyer representing him told reporters the arrest had been “violent”. CONAIE later condemned the detention as “arbitrary and illegal”, calling for a “radicalisation” of protests.

“We call our organisational structure to a great Indigenous and popular uprising,” the coalition tweeted after Iza’s arrest. “Long live the social struggle!” 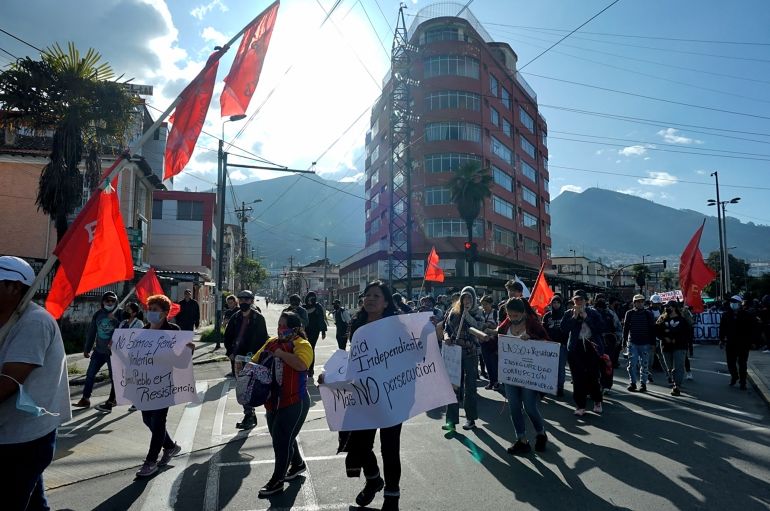 Oil producer Ecuador has been dogged by rising inflation, unemployment and poverty, which have been exacerbated by the COVID-19 pandemic. Fuel prices have risen sharply in the country since 2020, almost doubling for diesel from $1 to $1.90 per gallon (about 3.78 litres) and rising from $1.75 to $2.55 for gasoline.

The CONAIE alliance is a powerful force in Ecuador, where Indigenous people make up more than a million of the country’s 17.7 million population. The alliance is credited with helping to topple three presidents between 1997 and 2005. Its leaders have taken part in several rounds of fruitless talks with Lasso’s conservative government in recent years.

In 2019, then-president Lenin Moreno abandoned plans to eliminate fuel subsidies after the CONAIE-led protests that resulted in 11 deaths.

In 2021, Lasso froze fuel prices after a round of protests led by CONAIE led to dozens of arrests and the injury of several people, including members of the police. 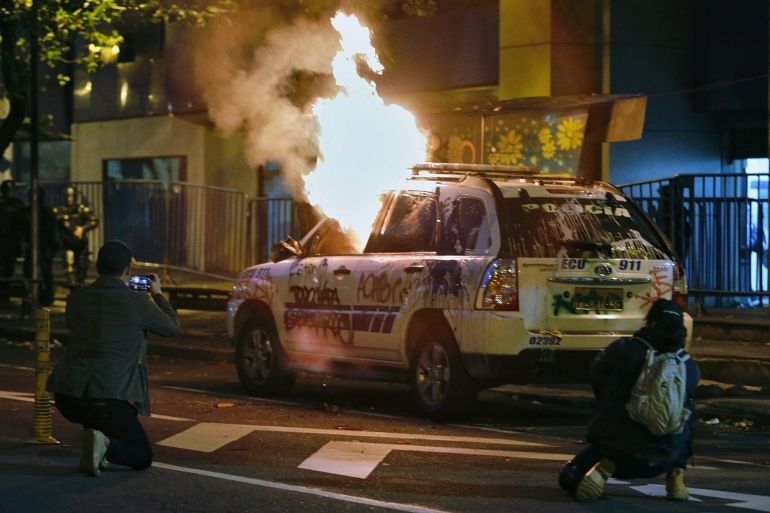 Lasso has denounced “acts of vandalism” amid the protests, which he said have included “the burning of patrol cars, invasions of farms, the breaking of windshields on private and school vehicles, an attack on an oil pumping facility, the cutting off of community water supplies, the closure and serious damage to state roads”.

Chinese company PetroOriental said on Tuesday that protesters had occupied and paralysed some of its wells in the Amazonian Orellana province, causing a loss of 1,400 barrels of crude per day.

Iza was arrested with four others, according to interior minister Patricio Carrillo. It was not immediately clear if they had also been released.

Carrillo accused those arrested of “paralysing, looting, kidnapping, attacking” in such a way that “the disorder, the chaos, the vandalism causes social unrest.”