Migratory sea turtles, whales, sharks and manta rays, as well as birds, are set to benefit.

Ecuador has created a huge new marine reserve north of the Galápagos Islands, with the ultimate aim of forming a protected corridor north to Costa Rica.

The designation will help to protect a wide range of migratory oceanic fauna, including sharks, sea turtles and various bird species.

The new reserve is incorporated into an existing reserve that has existed since March 1998, expanding the marina protected area around the archipelago from 138,000 km2 to 198,000 km2.

The creation of the Hermandad reserve is a "clear message for the world", said Lasso, who also described it as a "new relationship with the Earth, a new understanding of what constitutes progress for humanity". 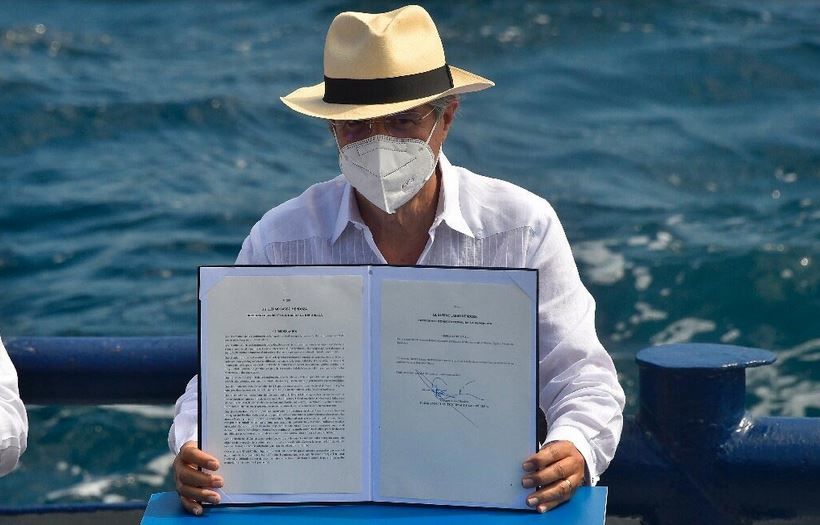 Ecuadorian President Guillermo Lasso with the decree for the expansion of the Galapagos marine reserve.

Colombian President Ivan Duque and former US president Bill Clinton also attended the event, together with government officials from Costa Rica and Panama.

Duque said that eventually adding Colombia's Malpelo islands and Panama's Coiba islands to the vast marine reserve will allow for the safe migrations of fauna such as sea turtles, whales, sharks and manta rays.

The new reserve "will guarantee the survival of 40% of the world's marine species", Duque said.

Lasso added that "the seas are great regulators of the global climate" and that "taking care of them is not naive idealism, it is a vital necessity".

Located in the Pacific some 1,000 km (600 miles) off the coast of Ecuador, the Galápagos is famous for its unique flora and fauna, made famous by British geologist and naturalist Charles Darwin's observations on evolution there.