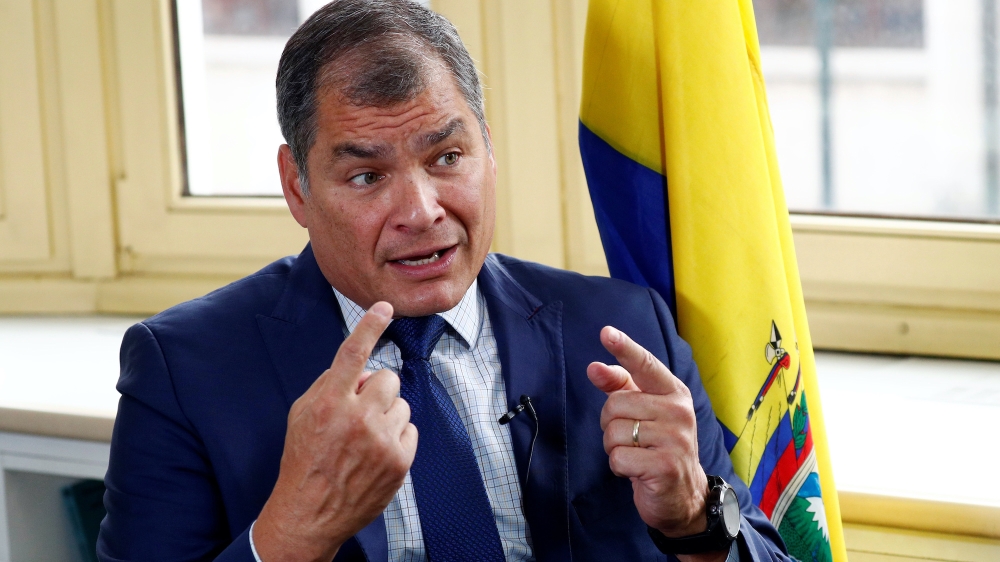 Ecuador’s president from 2007 to 2017, Correa was sentenced in absentia to eight years in prison for bribery.

The president of Ecuador’s National Justice Court has signed an extradition request seeking the return of former President Rafael Correa, who lives in Belgium and in 2020 was sentenced in absentia to eight years in prison on bribery allegations.

Ivan Saquicela said on Friday that he had signed the request based on an extradition agreement between Ecuador and Belgium, and other international accords.

“Yesterday, I signed the ruling initiating the extradition process,” Saquicela told Teleamazonas, as reported by the AFP news agency.

“We have a solid conviction. There is an agreement with Belgium and international agreements, as well as the extradition law, which support our request from a legal perspective. There are no value judgements here,” he said.

Correa, who served as Ecuadorian president from 2007 to 2017, was accused along with several former government officials and businesspeople of taking part in a corruption scheme that saw bribes paid for public contracts during his presidency.

Correa was accused over a $6,000 payment to his private account, which he claims was a loan.

He has denied all the accusations, saying he is the victim of political persecution orchestrated by his opponents.

Responding to Friday’s announcement, Correa in a series of tweets called Saquicela a “clown” and a government “puppet” and said the extradition request was “another scrap of paper”.

But Saquicela defended the move, telling the Reuters news agency that “this is the first time that extradition has been requested and, accordingly, it is strictly in line with the law.”

The extradition request will next move to Ecuador’s foreign ministry, which must formally ask Belgium to extradite Correa.

Correa has requested political asylum from Belgium, his wife’s home country where he has lived since he left office in 2017. The former president’s press team said that the request was accepted by the government in Brussels.

“On April 19, 2022, the federal government of Belgium granted political asylum to the economist Rafael Correa Delgado, Ecuador’s former President, thus recognising the political persecution against him,” the team said in a statement.

Neither Ecuador’s nor Belgium’s foreign ministries responded to requests for comment from Reuters. A spokesperson of Belgium’s Commissioner for refugees declined to comment.