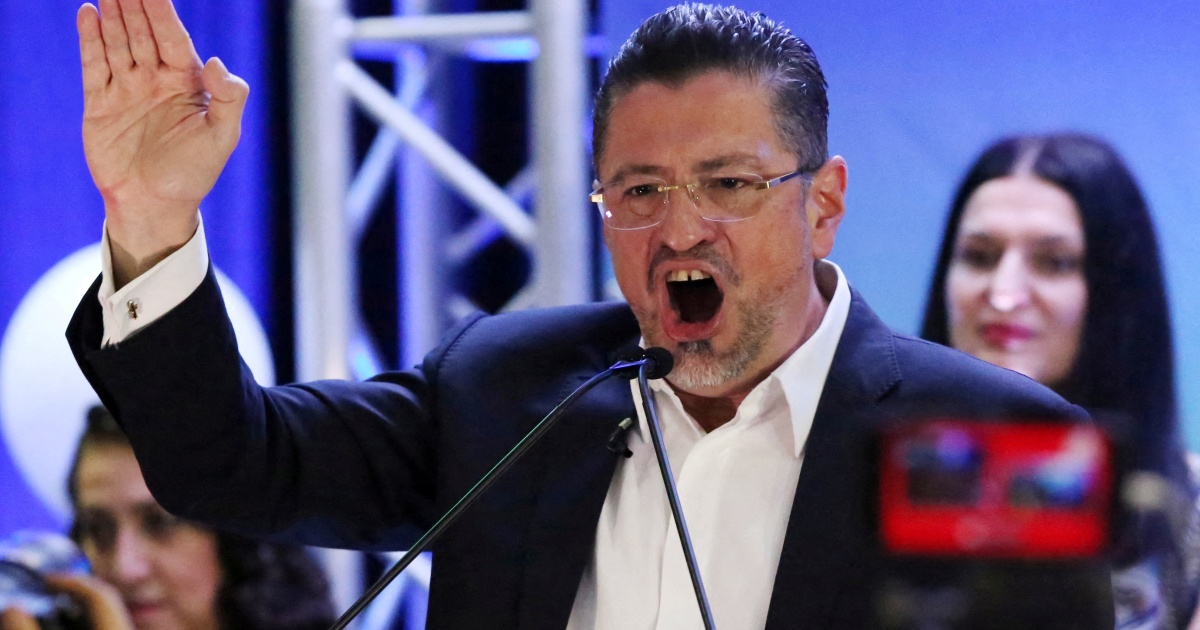 Chaves, whose ascent to the runoff race surprised many, won comfortably with 53 percent of the vote to centrist former President Jose Maria Figueres’s 47 percent, the Supreme Electoral Tribunal said on Sunday.

He delivered a victory speech shortly after Figueres, who served as president from 1994 to 1998, conceded defeat.

“For me, this is not a medal nor a trophy, but rather an enormous responsibility, heaped with challenges and difficulties that we will all resolve,” said Chaves, who will take office on May 8.

“Costa Rica, the best is to come!” Chaves said before celebrating supporters.

Still, more than 42 percent of the country’s 3.5 million eligible voters did not participate in Sunday’s poll, reflecting the lack of enthusiasm for the candidates, neither of whom came close to winning the 40 percent of votes needed to avoid a runoff during the first round of voting on February 6.

Figueres, who represents the National Liberation Party like his father, three-time President Jose Figueres Ferrer, told supporters, “Costa Rica has voted and the people have spoken.”

“As the democrats, we are we will always be respectful of that decision,” he said.

On the campaign trail, both candidates pitched themselves as leaders who could turn around the country’s fortunes.

Costa Rica, which has a population of about five million, has seen two decades of unemployment steadily increasing and inequality rising.

The country slipped deeper into debt during the COVID-19 pandemic, which hobbled its lucrative eco-tourism industry.

The results topped a bruising campaign where both candidates’ past controversies were put on full display.

Chaves, who served briefly in the administration of outgoing President Carlos Alvarado and represents the Social Democratic Progress Party, has been under investigation for allegedly running an illegal parallel campaign financing structure.

He was also accused by multiple women of sexual harassment when he worked at the World Bank. He was eventually demoted and then resigned from the institution, but has denied the accusations.

His combative style and confrontational approach to the media have earned him comparisons to former US President Donald Trump.

For his part, Figueres has been questioned over a $900,000 consulting fee he received after his presidency from the telecommunication company Alcatel while it competed for a contract with the national electricity company. He was never charged with any crime and denied any wrongdoing.

Chaves will take office next month with his party holding just 10 of the national parliament’s 57 seats, while the party of Figueres, who came first in an indecisive first-round vote in February, has 19.

He will replace President Carlos Alvarado, whose popularity has tanked as the economy has flagged. In February, Alvarado’s party did not win a single seat in the new congress.

A spokesman for the Supreme Electoral Court (TSE), Gustavo Ramon, said Sunday’s voting was carried out “in peace and tranquillity”.