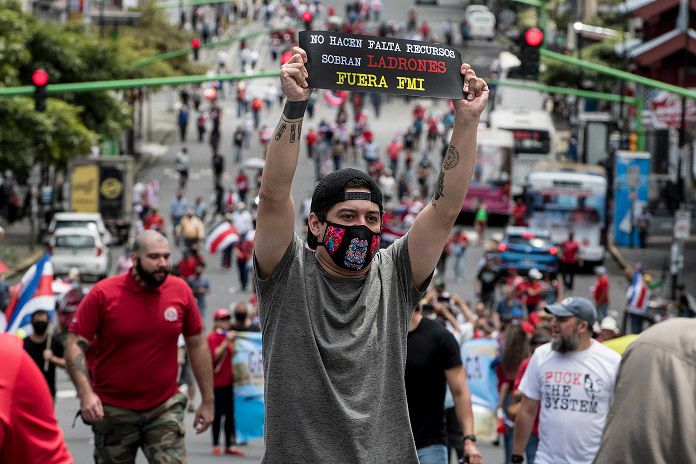 Due to blockades in Costa Rica, the border with Panama remains closed

The president of Costa Rica, Carlos Alvarado, told the Costa Rican media that he will only meet with the National Rescue movement if the road closures are lifted.
The Alvarado administration informed José Miguel Corrales and Célimo Guido, leaders of Rescate Nacional, that it will not include them in the national dialogue until the blockades are lifted.

Meanwhile, Guido told Noticias Repretel that the conditions are set by us, not the President.

At the time of writing this information, there are 28 roadblocks in Costa Rica. In addition, the Costa Rican riot agents clashed with members of the National Rescue movement in Golfito and Ciudad Neily.

Meanwhile, the members of Rescate Nacional insist on their protests and roadblocks, which includes the border area with Panama and Costa Rica.

It is estimated that more than 400 carriers are stranded on the Costa Rican-Costa Rican border due to roadblocks in Costa Rica.

Due to the incidents, the Ministry of Security of Panama reinforced surveillance and security measures in the Paso Canoas area.

National Rescue was convened by the National Association of Public Employees, the main union of state workers and had the support of some unions of educators for negotiations with the International Monetary Fund (IMF) for an amount of 1.75 billion dollars, which would cause the payment of new taxes.

The movement began in the middle of last week a series of road blocks throughout Costa Rica to pressure the Alvarado government to desist from its negotiation proposal with the IMF.

According to the Alvarado government, the agreement with the IMF is considered key to face the fiscal deficit, projected at 9.7% of gross domestic product for this year.

The government agreed on Sunday, October 4, to withdraw the proposal, criticized for promoting temporary taxes instead of cutting expenses, but the movement maintained the protests.

The blockades have created chaos in traffic, led to clashes with the police and losses to Panamanian merchants in Paso Canoas.
#Costa Rica
Add Comment