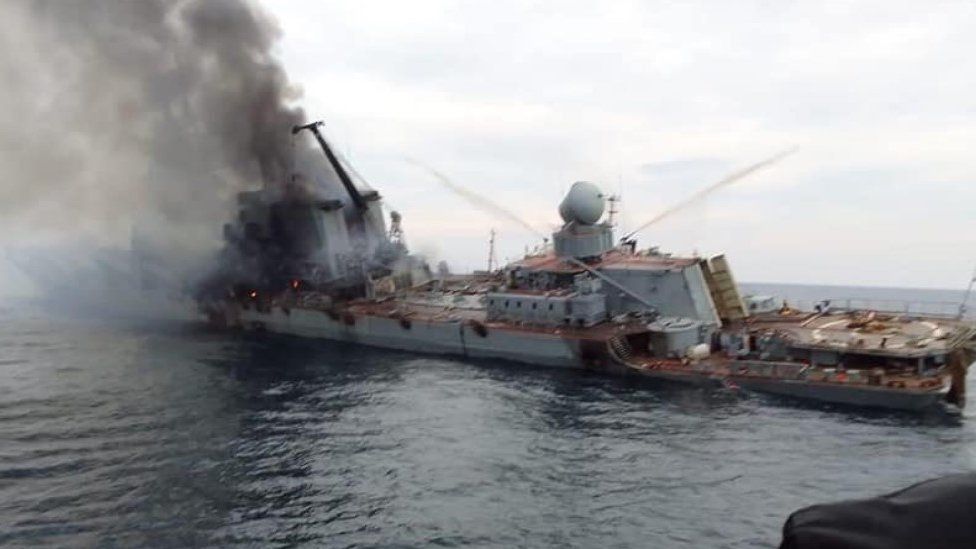 Dramatic pictures - and a credible video - showing the Russian warship Moskva before it sank last week have appeared online.

The video and images match the shape and design of the missile cruiser.

Russia says a fire onboard caused ammunitions to explode and the vessel sank as it was being towed in a storm. Ukraine says it hit it with missiles.

The new images do not immediately back the claims of either side - but there is no sign of a storm at the time.

What do the video and images show?

The images were allegedly taken on 14 April, a day after Ukraine claimed to have struck the warship.

The three-second video clip - likely taken from a rescue boat - shows the Moskva in the distance listing heavily on her port side.

A tug, likely a Russian Shakhter, is on its right.

Smoke can be seen billowing out of the ship, with a section of the freeboard heavily damaged.

Holes are also visible in other parts of the freeboard in one picture, suggesting the warship had taken in a substantial amount of water.

It also appears all of the vessel's lifeboats had been deployed.

Is there more detail on the cause?

Unnamed US officials have told US media they believe the Ukrainian version.

Russia alleges it was damaged after an explosion and subsequently sank because of "stormy seas".

The BBC showed the footage to three naval experts who agreed the damage appeared consistent with a missile attack, but disagreed over whether other causes were still possible.

Jonathan Bentham, of the International Institute for Strategic Studies, concluded that the vessel in the images was certainly a Slava-class cruiser and "probably" the Moskva.

Mr Bentham said the visible damage sustained by the cruiser looked like it may have been caused by a Neptune missile attack, but stressed it was not possible to rule out other causes at this stage.

"The smoke marks on the portside seem to be near the waterline. That might indicate sea-skimming missiles, which the Neptune missiles are reported to be," Mr Bentham said.

Another expert, Rear Admiral Chris Parry, who previously commanded a Royal Navy destroyer, told the BBC he was sure the damage was caused by a missile strike.

"You can see a very jagged imploded ship's side," Rear Adm Parry said. "If it was an internal explosion, you'd see plating sticking outwards rather than inwards. But this suggests penetration and subsequent explosion. No doubt it's been hit by one or two missiles."

The former Nato commander said one explanation for the extensive smoke damage was that missiles being stored onboard became punctured in a strike and leaked their fuel the along the ship's decks, causing a devastating fire.

"You can see the decks are completely buckled, the whole ship looks like it's burnt out. I think the fuel has run along the decks, even down the back end," he suggested.

Another military expert, Sidharth Kaushal of the Royal United Services Institute, noted to the BBC that the main area of fire damage is "where the ammunition for the ship's anti-aircraft guns are".

"One working hypothesis is that a fire started by the initial strike cooked off the ammunition from the anti-aircraft guns," Kaushal said. 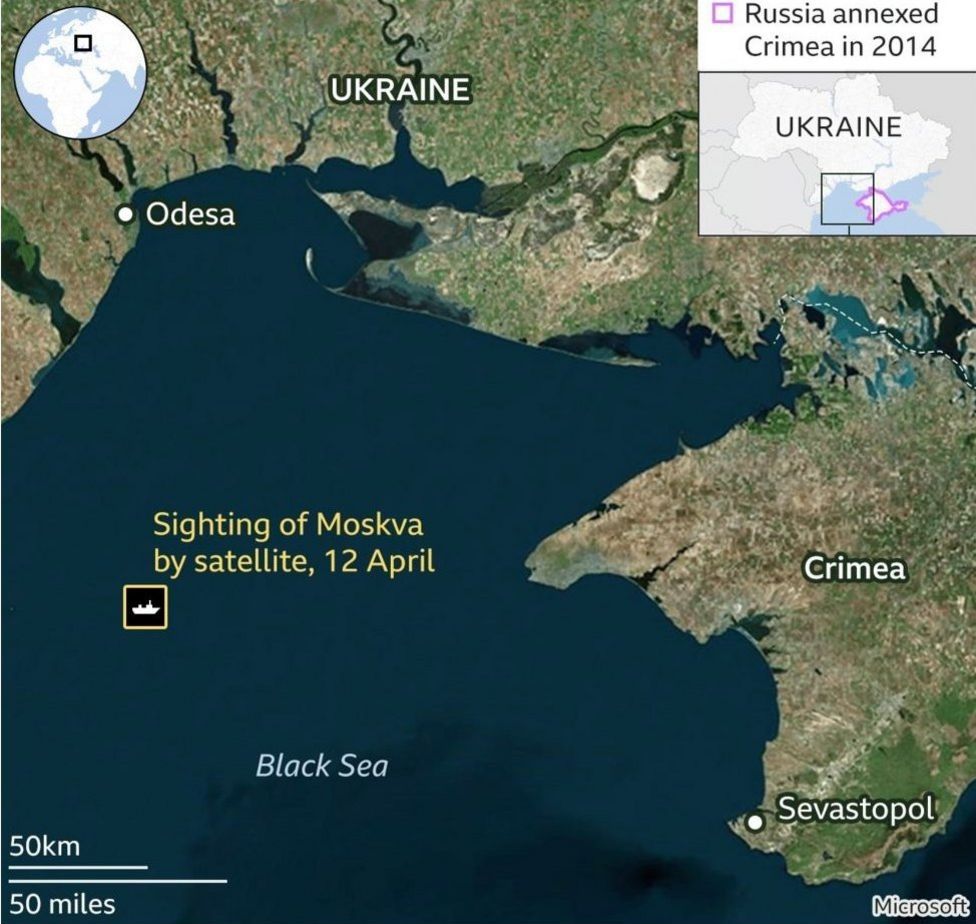 While conditions can vary at different times, there's nothing in the video to confirm the Kremlin's initial assertion that the Moskva sank due to stormy conditions.

Prior to the sinking, Russia's defence ministry issued a statement saying "the vessel is seriously damaged. The entire crew have been evacuated".

The BBC has not been able to verify the claims.

Russia has also not admitted any casualties. On Saturday, the Russian defence ministry published footage showing what it described as the crew of the Moskva on parade in the Crimean port city of Sevastopol.

The 510-crew warship had led Russia's naval assault on Ukraine, which made it an important symbolic and military target.

Earlier in the conflict the Moskva gained notoriety after calling on Ukrainian border troops defending Snake Island in the Black Sea to surrender - to which they memorably radioed a message of refusal which loosely translates as "go to hell". 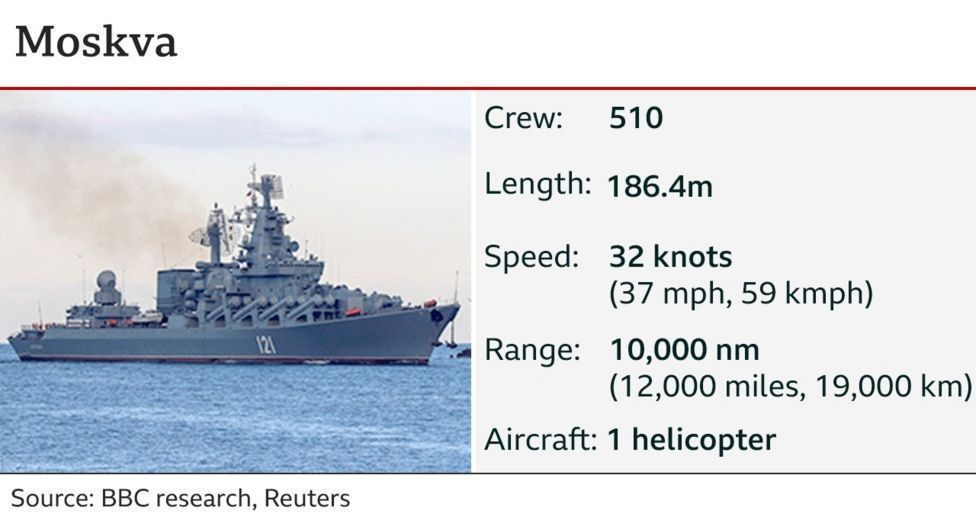