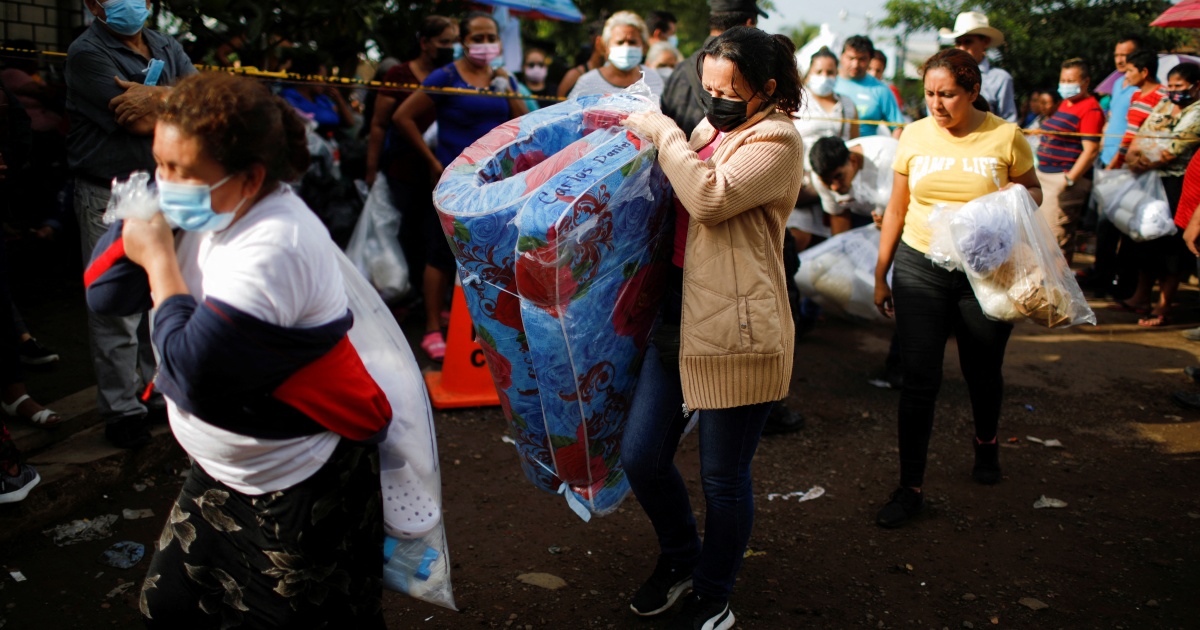 Dozens die in custody under El Salvador’s state of exception

Thousands have been arrested since the country suspended certain civil liberties amid a crackdown on gangs.

In the days after 32-year-old Walter Vladimir Sandoval Penate’s March 30 arrest in El Refugio, El Salvador, his mother travelled to the public prosecutor’s office in a desperate search for information. On the fifth day, April 4, a car from a funeral home pulled up behind her as she arrived home.

“The car brought us the news that he had died,” the young man’s father, Saul Sandoval, told Al Jazeera.

Authorities told the family that he had been in the process of being transferred from a jail cell in Ahuachapan to Izalco prison in Sonsonate, but he fainted and died before entering. According to a medical report reviewed by Al Jazeera, the cause of death was “chest trauma”. Photos of the body show deep cuts and bruises on his arms and around his knees.

“If he fainted, our question is: Where did all the injuries that he has come from?” Sandoval asked.

His son is among at least 40 inmates who have died in state custody since El Salvador on March 27 imposed a state of exception suspending certain civil liberties, according to data from Amnesty International shared with Al Jazeera.

More than 40,000 people have since been arrested. Salvadoran President Nayib Bukele called for the emergency measures as part of a crackdown on gangs, following a surge in homicides that left more than 80 people dead in a single March weekend.

Human rights groups say the policy has led to widespread human rights abuses, including deaths in state care as the already overpopulated prison system has extended even further past its breaking point.

“The stories coming out of the prisons are really dire,” Arjun Chaudhuri, a campaigner for Mexico and Central America with Amnesty International, told Al Jazeera. “There is no real access to basic human needs, like food or medical care, and there is also violence being exercised within the prisons. It paints a very bleak picture.”

This is a clear violation of the state’s responsibility to protect the inmates in its care, he added. 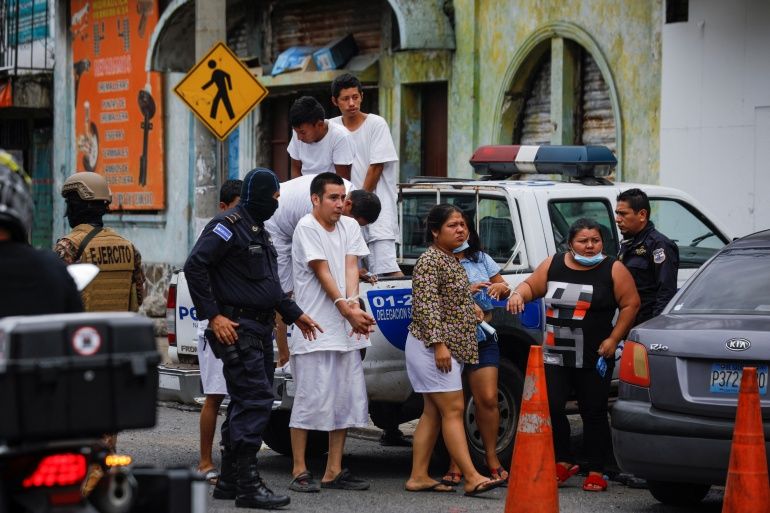 People taken to a police detention centre during the state of emergency in San Salvador, June 15

The Salvadoran human rights organisation Cristosal says at least 14 in-custody deaths during the state of exception can be categorised as extrajudicial killings, due to evidence of violence or a lack of medical attention.

In the case of Walter Vladimir Sandoval Penate, witnesses said police beat the young man after he denied being a gang member, according to local media. His father said he had no gang ties.

Later in April, 37-year-old Mauricio Alberto Flores Sorto reportedly died after staff at the Izalco prison did not provide him with necessary medications for hypertension and anxiety. And on May 10, Carlos Wilfredo Sauceda Gonzalez and Sergio Alcides Natividad Calzadilla died in La Esperanza prison after having been beaten, Cristosal found.

El Salvador already had one of the highest imprisonment rates per capita in the world before the state of exception began, second only to the United States, according to the non-profit Prison Policy Initiative. In 2020, El Salvador’s prison system was about 35 percent over its maximum capacity of about 27,000 inmates, according to the World Prison Brief database. And the government’s inhumane prison enforcement tactics, which have included parading barely dressed inmates in front of cameras, had already gained scrutiny from human rights groups.

Overcrowding and poor prison conditions are common throughout Latin America’s prisons, according to Juan Pappier, a senior researcher at Human Rights Watch who has been documenting arbitrary detentions during El Salvador’s state of exception.

“El Salvador has among the worst records in the region in terms of prison overcrowding,” Pappier told Al Jazeera. “And the mass arrests conducted during the state of emergency are only making it worse and worse.”

In recent weeks, Amnesty International has documented conditions that Chaudhuri calls an “affront to human dignity”, including rotting food, meals being rationed and shared among inmates, and a lack of hygiene products such as soap and toilet paper. One person who was imprisoned and later released lost 20 kilogrammes in less than three weeks, he said, while medicine and access to doctors have been either non-existent or extremely limited.

Amnesty, which based its findings on interviews with former prisoners and the families of those who died in custody, has also documented a pattern of prison violence, perpetrated by both gangs and authorities. In one case, a 16-year-old boy told Amnesty that gang members regularly beat him; one day, they threw a bag of urine at him. He said prison guards saw all of this, but did nothing.

“What we’ve heard from people who have been released is that gang members are in control of prisons,” Chaudhuri said. “They decide when people eat, when people use the bathrooms, when people shower, all of these decisions – and they also exercise violence over prisoners who have been arbitrarily detained and don’t necessarily form part of any sort of gang structures.”

Current prison conditions seem to be “part of a deliberate state policy of punishing people the state claims are part of gangs”, he added. But Amnesty and other rights groups have documented that many of the Salvadorans arrested are not part of gangs, and have been arbitrarily imprisoned. 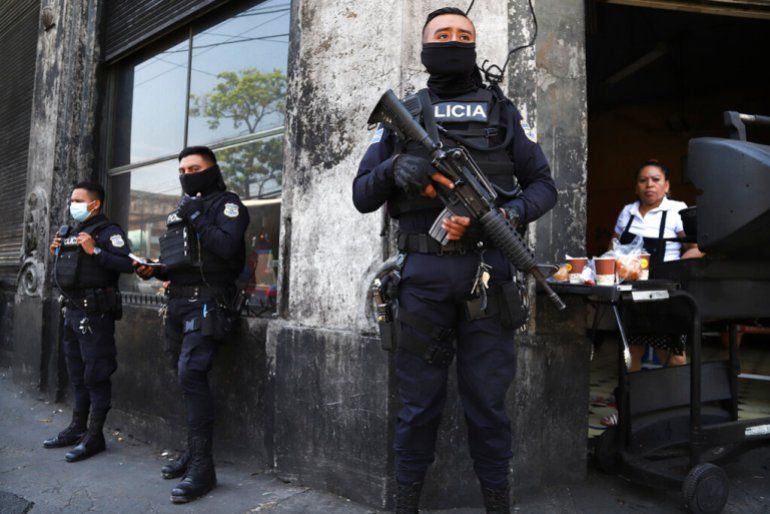 In a speech in April shortly after the state of exception began, Bukele threatened to withhold meals for inmates, saying: “I don’t care what the international organisations say. Come and protect our people. Come and take the gang members if they love them so much.” Neither the president’s office nor the country’s prisons bureau responded to Al Jazeera’s requests for comment.

According to Chaudhuri, authorities have not been forthcoming with families about the circumstances of their relatives’ deaths, potentially violating UN rules on prisoner treatment, which require authorities to immediately inform next of kin of a prisoner’s death and to “conduct prompt, impartial and effective investigations into the circumstances and causes”.

For Sandoval, the lack of information from authorities on his son’s case weighs heavily on the family: “We’re still looking for answers,” he said, noting that if they can’t rely on prison authorities, he will continue the search himself. “We want to investigate this case.”