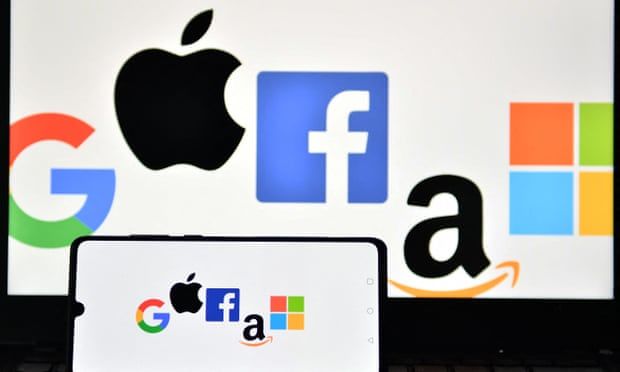 If anyone needed convincing that the pandemic would turbo-charge sales at America’s largest tech firms and send profits soaring, this week’s quarterly results defied the doubters.

Apple, Microsoft and Google owner Alphabet have reported profits for the most recent three-month period of such stratospheric proportions they put the banks, entertainment firms and healthcare businesses in the shade. Facebook and Amazon are poised to report their own stellar performances before the weekend.

Alphabet doubled its profits from the same period last year. Microsoft reported a 21% increase in revenues and the Windows software maker took its stock market valuation to $2tn (£1.4tn), a figure that is now heading towards the UK’s annual income, or GDP, of $2.8tn.

With size comes power. Much of the focus recently has been on the use of tax havens by tech firms to avoid paying corporation tax on their super-profits.

A scheme put together by the Organisation for Economic Development & Cooperation (OECD) to make digital services companies pay a minimum 15% level of corporation tax is a welcome development.

It should be in place by 2023, though a final agreement later this year among the G20 countries and a wider group of more than 130 from every region is not set in stone after a rearguard action by low-tax countries including Ireland and Hungary.

What is less discussed is how the tech giants use their size and lobbying power to dominate markets and lock in high prices.

Economists in the US have fretted about the high cost of monopoly capitalism as it now manifests itself in the digital sphere.

US policymakers of every stripe have weighed up the benefits of hosting world beating corporations – ones that are in part successful because they enjoy a light-touch system of regulation – against the high cost of their dominance at home where consumers inevitably pay some sort of price for that corporate success.

In the twilight years of the Obama presidency, it seemed that political flag waving by Democrats and Republicans for Silicon Valley might be over. That was until China became Congress’s chief enemy and it was clear the Russians were using cyberwarfare as a political weapon.

These days the large digital firms seem to have the same kind of power as cold war defence contractors, which could name their price when asked to provide sophisticated support to government departments.

The EU has made clear that anti-trust laws – ones that seek to restrict monopoly power and promote the rights of consumers – come first during long battles with Microsoft and Google. In April, the European Commission accused its latest target Apple of gouging app developers by charging a 30% fee for selling through its online store, a fee it said was passed on to consumers in higher prices.

There were other monopolistic tactics, said the EU, including “a dominant position” in the distribution of music streaming apps.

Brexit means Britain could take a similar or even tougher stand. After all, consumers in the UK suffer the same higher prices as those in the EU and US.

Earlier this month the government announced plans for a Digital Markets Unit that will “require large digital businesses to follow new rules of acceptable behaviour”. But it appears from the scope of the new watchdog that staff will be supplied with microscopes to watch for relatively minor breaches.

Google and the rest will most likely continue to set the agenda, unencumbered by tough rules, except that is, in the EU.

Driving through Sheffield, it is difficult to miss the mammoth Sheffield Forgemasters factory. Sitting astride the river Don, the business has more than 200 years of history and still qualifies, despite its near demise and resurrection after the financial crash of 2008, as Britain’s last remaining independent steel business. The mill has survived, supporting 700 jobs, but without the cash needed to modernise its future was in doubt.

After much hand wringing, the business is to be bought by the MoD, which has decided that it needs a domestic manufacturer for the high-grade steel parts in nuclear submarines and other vital military kit.

It is a bold move for a Tory government and could be viewed as a rejection by Boris Johnson of the privatising zeal of his predecessors.

But the MoD says there is an aim to “eventually return the business to the private sector”. Johnson has, meanwhile, rejected nationalising the struggling Liberty Steel business despite owner Sanjeev Gupta putting two factories up for sale.