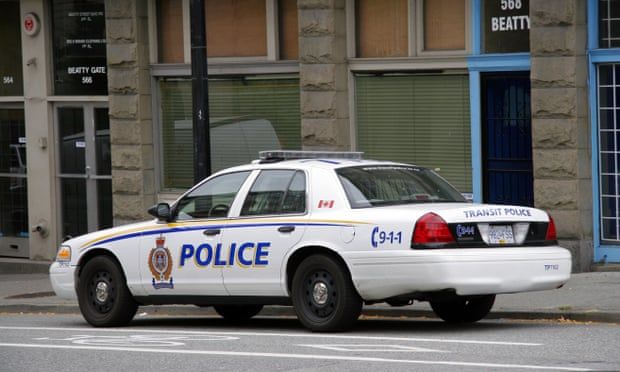 The British Columbia program was abruptly shut down and nine officers are reportedly under investigation after the incident
Policing experts in Canada have called for an overhaul of undercover tactics after reports that officers at a training session participated in “disgusting, appalling” behaviour, including penetrating a colleague using a vegetable, defecating on another and exposing genitalia.

According to Global News and CTV, the BC Municipal Undercover Program was abruptly shut down after the workshop in May, which included a role-playing exercise in which some participants went to “extreme lengths” to prove they were not officers.

Several participants were so disturbed by the incident that they reported it to their superiors, and nine officers are reportedly under investigation.

British Columbia’s solicitor general, Mike Farnworth, described the allegations as “disgusting” and “appalling” and authorities in the province have said that an independent investigation will be launched.

Experts said that the incident underlined the need for clear guidelines to undercover operations and external oversight of policing tactics.

“If these allegations are correct, then obviously some of these officers thought things were appropriate that are manifestly inappropriate,” said Kent Roach, a professor of law at the University of Toronto and the author of several books including Canadian Policing: Why and How It Must Change.

Roach also expressed concerns over the liberal use of deceptive and even violent tactics which Canadian police are allowed to use in undercover operations.

“Part of the problem is we too often leave the police to govern themselves, subject to the odd court decision,” he said.

In recent years, criticism has focused on Canada’s frequent use of a tactic known as the “Mr Big” technique, used when police suspect a person has committed a serious crime, but cannot prove it due to a lack of evidence.

The technique involves recruiting the suspect into a fake criminal organisation in which they are encouraged to perform risky and sometimes illegal activities as ways of “proving” themselves worthy.

The end goal of the exercise is to have them meet the gang’s “boss” and confess to the worst thing they have ever done.

Such tactics are banned in many other countries, but have been used in hundreds of Canadian police investigations since it was first developed in the early 1990s.

Mr Big operations are typically expensive investigations that do not have to follow any specific rules beyond regular police codes of ethics and procedures. They can be used by any police force in Canada, and police do not have to disclose whether the operations yield successful convictions, nor how much they cost.

This week, a northern Alberta jury acquitted a man of murder – instead, convicting him of a lesser charge of manslaughter – in the death of Gloria Gladue, after a protracted Mr Big operation.

Michael Kempa, an associate professor of criminology at the University of Ottawa, said that there are not even rules about recording confessions made during Mr Big operations – meaning suspects can end up being prosecuted on undercover officers’ word alone.

Kempa called for the federal government to set clear national rules on how such investigations should be conducted and which crimes they can be used to investigate. “At the moment, we leave it to the courts, so it’s post-hoc accountability,” he said.

Guidelines should also consider a suspect’s vulnerability of making false confessions, said Roach, pointing to a 2013 case in which a BC couple targeted in a Mr Big operation were pushed into creating a plan to plant pressure-cooker bombs at Canada Day festivities.

“That was a Mr Big done against two recovering heroin addicts,” he said. “So I think one of the things the policy would do is you don’t target people who are especially vulnerable to giving false confessions.”

He said municipal leaders could listen to repeated calls from civilians and experts to use their positions to implement more democratic control of the police – such as electing police leaders, as well as setting policing priorities that weigh the value of undercover operations.

“I’m skeptical, but I also think that that’s an issue that needs to be democratically resolved,” said Roach.
Add Comment