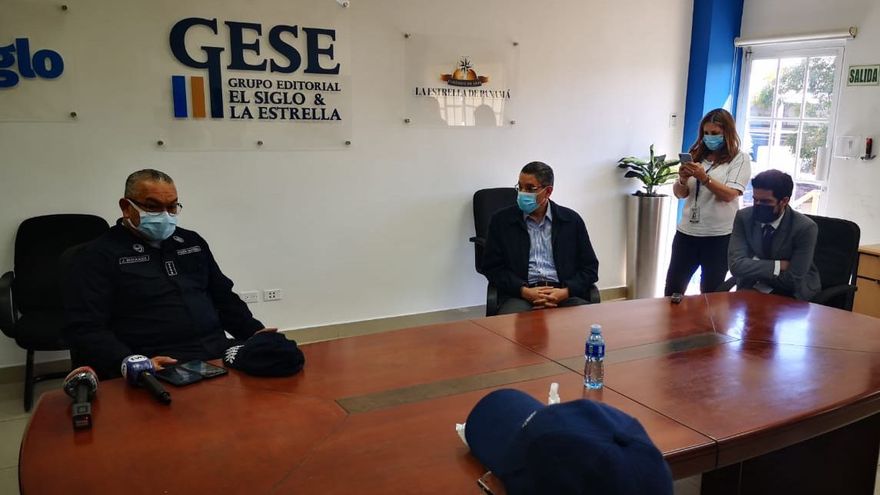 On Friday afternoon, a meeting was held at the Geseen Group facilities, in which the director of the newspaper La Estrella de Panamá, Gerardo Berroa, the director of the National Police, Jorge Miranda, and the journalist Juan Alberto Cajar participated, after Cajar was detained on Thursday by police units while carrying out a journalistic coverage of a protest.
During the meeting, Miranda once again apologized to Cajar, the media and the country, while expressing that he identifies with the journalists since they, on many occasions, share the stage with the Police.

We share scenarios in many cases, we share scenarios and we share something very important, which is that each of us has to make decisions at critical moments, in some moments journalists make a decision, cross a line and get the exclusive, get the photo or the report and they give him a prize, on some other occasions the journalist crosses a line and consequences arise, the same thing happens in the Police, the decisions that we make, suddenly like today, with video analysis, with verification Of all the scenarios, they are taken in fractions of seconds, the difference is a little more marked with the Police is that each decision has a consequence, always what we decide has a consequence, if we decide well we save a life, we achieve a good action, if we decide wrong we can generate an affectation Miranda said.

He added that through this meeting he seeks conciliation and the establishment of bridges that can unite the division that has been generated, and manage to protect national interests through the professions, in this case that of journalists to inform and that of the Police to safeguard the peace.

Meanwhile, Berroa questioned Miranda the fact of having failed an order from the President of the Republic, and asked if he had submitted his resignation, to which Miranda indicated that he does not consider that he should resign and that he is clear about the line command and who is the head of the country.

For his part, Cajar complained to the Director of the Police for lying in an official statement in relation to the fact that he had not shown his press card at the time of the arrest, while Miranda acknowledged that an error could have been made at the time of police action.

We accept that there may have been an error in judgment by not being able to quickly identify the person to whom we applied force and that resulted in an act of the Police, a current one that has to be sustained before the authorities that have to make that report and It must have the elements that allow it to be brought before the authority, which is the one who decides, and present for us to later point out when appropriate that we have nothing against the journalist because we understand that he was carrying out a task and we could have made an error in judgment at the moment we apply force. Definitely on Monday we will go to the Justice of the Peace and what needs to be done to better strengthen relations between Panamanian journalism, between Panamanian society and the Police , Miranda said.

It is worth mentioning, as Cajar explained earlier, to retain him, the uniformed men threw him to the ground, placed straps on him and sprayed him with pepper spray despite having indicated on several occasions that he was doing a newspaper coverage.

He was released after 11:00 pm, hours after his arrest, and later, summoned to a hearing before the Casa de Paz in the Bella Vista district, which was postponed until next Monday, November 2.

The Ombudsman, Eduardo Leblanc, also participated in the meeting and recommended to the Director of the Police that they dismiss the process against the journalist Cajar, and thus end the incident.

For its part, the Forum of Journalists for Freedom of Expression and Information, the National Journalism Council (CNP) and the Panamanian Radio Broadcasting Association, issued a statement in which they demanded that the President of the Republic, Laurentino Cortizo take forceful action in defense of democracy, freedom of expression, freedom of the press and citizens' right to demonstrate.
Add Comment