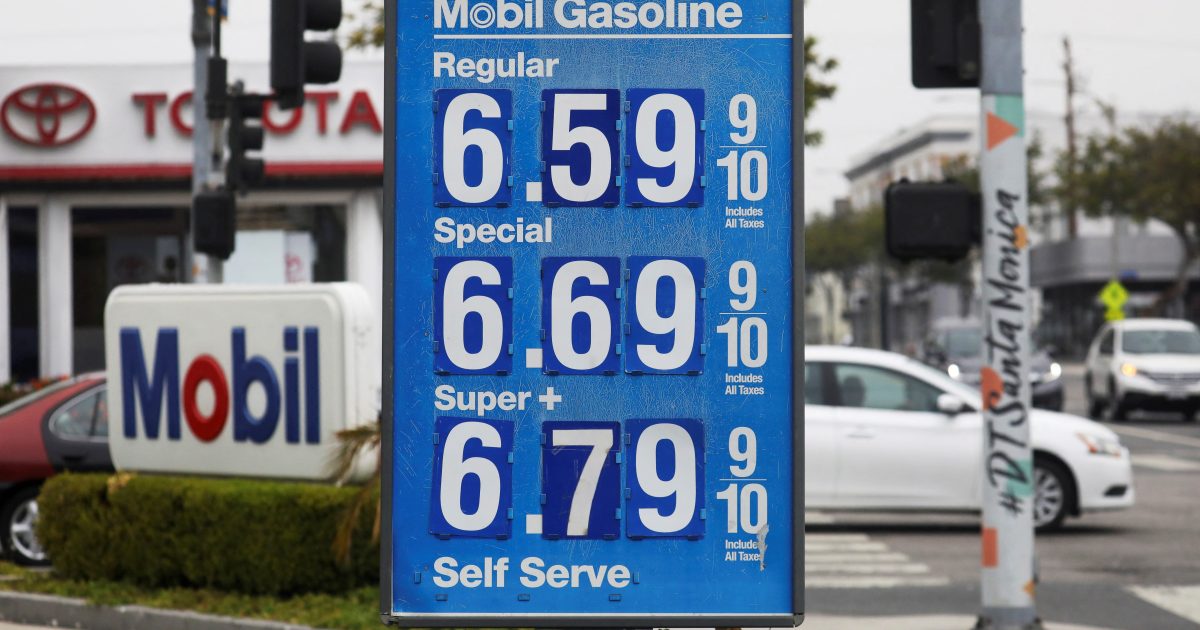 Despite pain at the pump, Americans are hitting the road

Heading into the US summer driving season, Americans are fueling up but how long before they have to hit the brakes?

As petrol prices continue to break records in the United States, putting a significant strain on Americans’ wallets and threatening economic growth, analysts predict that pain at the pump will cause some demand destruction in the coming months of the US summer driving season.

Oil climbed to a two-month high on Thursday on signs of tight supply. But despite soaring prices, the highest inflation in over 40 years, and a plummeting stock market, most American drivers are filling up this Memorial Day Weekend, according to the American Automobile Association (AAA).

Thirty-nine million people are expected to travel more than 80km (50 miles) from their homes this weekend – an 8 percent increase from last year, when gas averaged $3 per gallon.

According to AAA, all 50 states had national retail prices of more than $4 per gallon as of this week, with Oklahoma offering the cheapest gas at $4.03 per gallon and California offering the most expensive gas at an average of $6.06 per gallon.

With a gallon of gas costing more than the hourly minimum wage in some states, a growing number of American families are going into credit card debt to fill up.

Consumers’ pent-up demand after being cooped up for the past two summers and Brent oil rising nearly 50 percent this year – primarily as a result of Russia’s invasion of Ukraine and the Organization of Petroleum Exporting Countries (OPEC) ignoring US President Joe Biden’s request to pump more crude – are all driving price increases at the pump.

US Memorial Day, the last Monday in May, unofficially kicks off the start of summer, when millions of Americans travel on vacation by vehicle. As they prepare to hit the road in the coming months, petrol prices are expected to keep rising.

And analysts Al Jazeera spoke with warned that not much can be done to cool prices quickly.

No favours: The international politics of oil & gas

Two years ago, the coronavirus pandemic wiped out crude demand as restrictions and lockdowns decimated travel. Since then, OPEC and its allies – a grouping known as OPEC+ – agreed to gradually add more barrels to the market in order to maintain price stability.

But oil prices have rebounded quickly as demand recovered. As oil and petrol prices in the US surged, President Joe Biden attempted to intervene. He urged OPEC+ to release spare capacity. OPEC+ refused.

“The Saudis turned him down flat. Biden is on bad terms with Saudi Arabia,” Jim Krane of Rice University’s Baker Institute for Public Policy told Al Jazeera. “The Saudi leadership does not want to do him any favours.”

No favours even as in recent weeks, the aftermath of the Russia-Ukraine war sent both global benchmark Brent and West Texas Intermediate crude prices past $120 a barrel.

Saudi Arabia, the cartel’s kingpin, still does not see a supply crunch. The Kingdom’s foreign minister, Prince Faisal bin Farhan Al Saud, said this week at the World Economic Forum in Davos, Switzerland, that he does not expect an immediate shortage of oil and only a limited shortage of oil products.

Riyadh posted a budget surplus of $15.33bn in the first three months of 2022, according to the Saudi finance ministry.

Russia, the world’s second-largest supplier, is increasingly isolated from Europe and the US, which has imposed some of the most severe economic sanctions on Moscow as punishment for its invasion of Ukraine.

In turn, the Kremlin has threatened to cut off oil and gas supplies to European markets, which has sent prices higher. Meanwhile, petrol prices in the United Kingdom have broken several records in recent days.

High gas prices are a wildcard for any US president. In an election year, they could be downright politically damaging. But the reality is that petrol prices are determined internationally, Krane told Al Jazeera.

“What Americans pay is based on trade and investment decisions by thousands of players all over the world. But that’s not as sexy as saying that Biden’s failed policies are to blame,” he added.

“Voters take high gas prices out on the president and his party. It’s low hanging fruit for the Republicans this year. They’ll tell you that prices were lower under Trump, because of Trump. It’s nonsense,” said Krane.

The Biden administration’s options are limited at the moment. The president can release more oil from the Strategic Petroleum Reserve (SPRs), a stockpile used in times of national emergency. Biden has tapped those reserves twice in the last year, but price relief was short-lived. 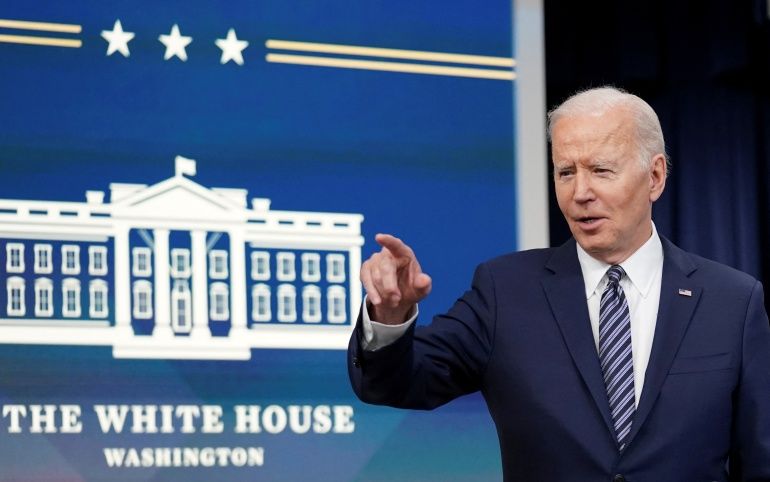 US President Joe Biden takes a question after announcing the release of 1 million barrels of oil per day for the next six months from the US Strategic Petroleum Reserve at the White House in Washington, DC, US

“Unfortunately, the Biden administration is in a rather difficult position. Gas prices are a big issue for the voter. And there are not many easy levers that the administration has to fix the price,” Blakemore told Al Jazeera.

This week, the US Energy Secretary said that Biden has not ruled out export restrictions to ease the cost of domestic fuel prices. According to Blakemore, the proposal would not provide the immediate relief Biden seeks and may actually increase market uncertainty and instability.

As prices rise, people may be forced to change their behaviour. They may be more inclined to take the bus, work from home, downsize their vehicles, or cycle to work.

Speaking to reporters in Japan earlier this week, Biden acknowledged the high petrol prices, adding that the US and world are going through an “incredible transition” and expressing hope that “when it is over we will be … less reliant on fossil fuels”. 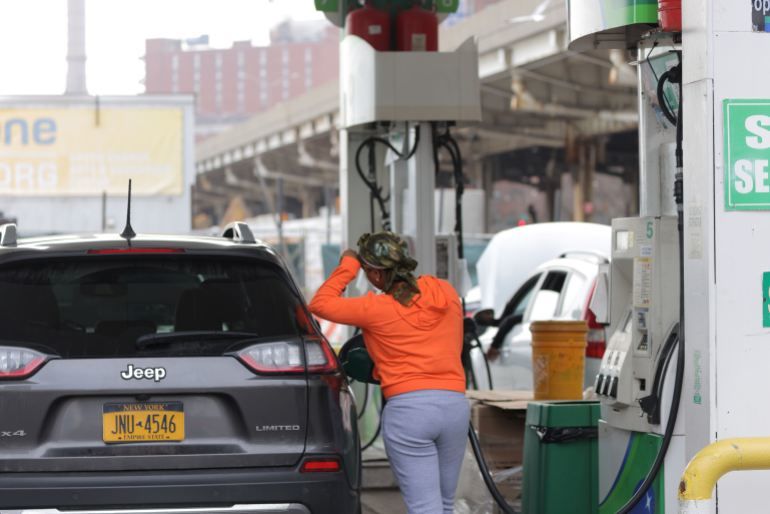 A person uses a petrol pump at a gas station as fuel prices surged in Manhattan, New York City, US

Analysts Al Jazeera spoke to predict a bumpy road ahead for oil and alternatives to oil.

“There are so many things that we are hoping to transition to right now but minerals are volatile, too. Look at what happened to the price of nickel in recent weeks,” Blakemore said.

The price of nickel has soared nearly 55 percent compared to last May, fueled by the supply threat posed by Russia’s war in Ukraine. Nickel is a critical ingredient in the lithium-ion battery cells used in most electric vehicles (EVs).

Where the president may wield some power is on the demand side, analysts said. To reduce exposure to higher prices, Biden can demand higher fuel economy standards or subsidize EVs.

“But again these are long-term solutions for a market looking for a quick fix,” said Blakemore. “People are willing to take a higher price environment to do things that they were restricted from doing because of COVID. But we are kind of in a really tough spot where there is no relief to be had soon.”