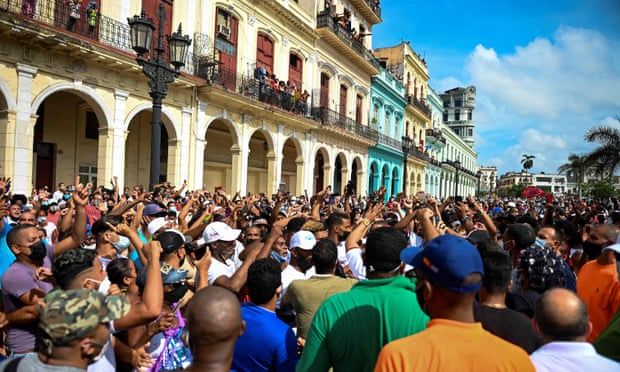 The supreme court president, Rubén Remigio Ferro, called it “a modern, very inclusive code”, telling state television that it favors “prevention and education before repression” while imposing “sanctions with sufficient rigor” against crimes that affect “social peace and the stability of our nation”.

It will take effect after going to a drafting commission and then being published in the official gazette.

Cuban authorities have never had trouble punishing dissent they see as dangerous. Hundreds of people were arrested for taking part in July 2021 protests across the island and some were sentenced to 20 years in prison on charges such as sedition. Independent journalists have sometimes been jailed on various charges, often choosing eventually to leave the island.

Under the new law, penalties of 10 to 30 years – in extreme cases even death – can be imposed on those who give information to international organizations, associations or even people who have not been authorized by the government.

It eliminates the vague, widely drawn offense of “precriminal dangerousness” that was sometimes used against dissidents, but creates new categories of crimes.

Those who insult or attack officials or civilians who are doing their “citizens’ duty” can be imprisoned for up to five years. A similar punishment can be imposed on those who “incite” against socialist order – and 10 years for those who use communications media to do so.

Among the most questioned clauses is the ban on any unauthorized financing from international or domestic sources that contributes to the commission of a crime. That section does not affect remittances from Cubans living abroad.

“With the new penal code, Cuban authorities continue to build an intricate and perverse legal regime of censorship and deal a devastating blow to independent journalists and outlets,” said Ana Cristina Núñez, the senior researcher for Latin American and the Caribbean for the New York-based Committee to Protect Journalists.

The new code reinforces penalties for corruption, speculation and hoarding.

Despite some complaints, it maintains a potential death penalty for 23 crimes – though that has not been applied since 2003 – and adds to sentences when crimes involve gender violence or crimes against minors and disabled people.

The age of criminal responsibility remains at 16.

This law “is a more direct way for the government to armor itself against civil society, against political dissidence”, said Saily González, an activist prominent in monitoring response to the 2021 protests.

The lawmakers declined to include a measure backed by Mariela Castro, daughter of former president Raúl Castro, to make femicide an explicit crime. Another deputy, Teresa Amarelle, leader of the Federation of Cuban Woman said that was not needed because of newly toughened punishment against gender violence.
Add Comment