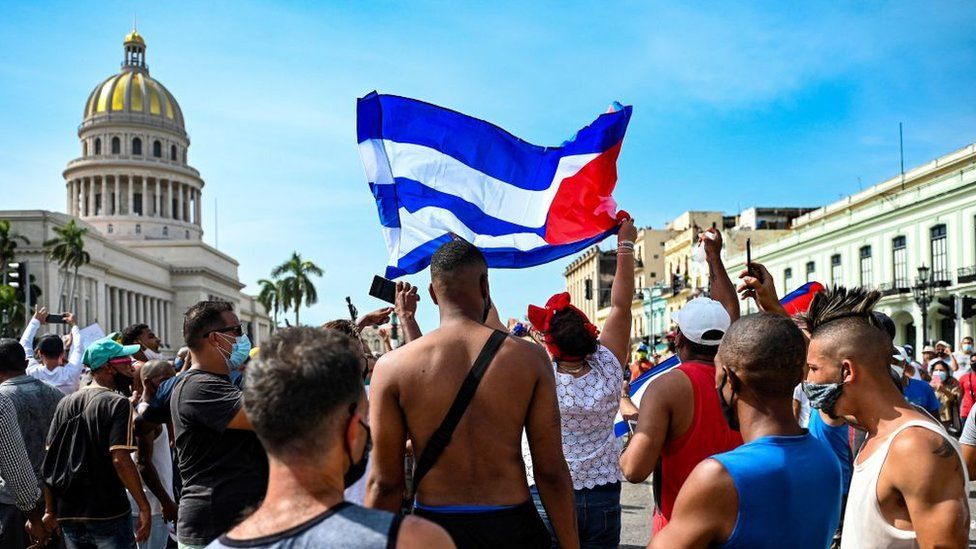 Cuba anti-government protesters jailed for up to 30 years

More than 100 people who took part in rare anti-government protests in Cuba in July have been sentenced to lengthy jail terms of between six and 30 years.

Out of the 129 defendants, only one was acquitted, with the remaining being found guilty of sedition and theft.

Thousands of Cubans took part in the demonstrations across the Communist-run island chanting for "freedom".

Unauthorised public gatherings are illegal in Cuba and more than 1,000 people were arrested.

The protests, the largest in decades, came amid a severe economic crisis with protesters voicing anger over price increases, and shortages of food and medicine.

Many were also critical of the Cuban government's handling of the Covid pandemic.

The ruling Communist party described the protests as a US-backed attempt at overthrowing the government.

Police cracked down on the impromptu rallies and there were clashes in which at least one person died and dozens were injured.

The court said the protesters overturned vehicles and threw stones, bottles and petrol bombs at police and Interior Ministry agents.

But Javier Larrondo of rights group Prisoners Defenders said that "the vast majority had demonstrated peacefully".