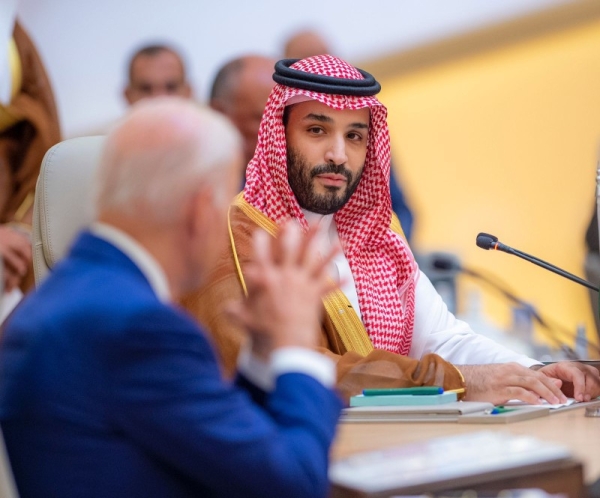 Crown Prince to Biden: Every country has its own different values that must be respected

Crown Prince Mohammed Bin Salman, deputy premier and minister of defense, reaffirmed that every country has its own different values and that must be respected. The Crown Prince said this while responding to US President Joe Biden’s remarks on the Saudi journalist Jamal Khashoggi incident during their bilateral meeting.
According to a Saudi source who attended the bilateral talks between the two leaders, Biden’s remarks on Khashoggi issue were quick and the Crown Prince responded to it by reminding him about the steps that the Kingdom had taken, denouncing and rejecting the incident.

The Crown Prince reiterated that the Khashoggi incident was unfortunate and abhorrent and that Saudi Arabia had taken all the legal measures and prosecuted the defendants. In his response, the Crown Prince noted that the Kingdom has put in place measures to prevent such mistakes from occurring in the future.

The Crown Prince Mohammed Bin Salman noted that these mistakes happen in any country, including the US. He also drew attention to some mistakes committed by the United States of America such as the Abu Ghraib prison incident in Iraq among others, stressing that the most important thing is how does these countries deal with such mistakes and take measures to prevent them from happening them again.

The Crown Prince also referred to the incident of the killing of the Palestinian-American journalist Shereen Abu Aqleh, and questioned the measures taken by US and other countries of the world in this regard.

The Crown Prince also told Biden that it is extremely significant that values be spread through dialogue. He stressed that the attempt to impose values ​​by force on any country is counterproductive, as happened in Iraq and Afghanistan where the United States failed to score success. “All countries of the world, especially the United States and Saudi Arabia, have many values ​​that they agree on and a number of values ​​in which we differ, but the right and good values ​​and principles always affect the peoples of other countries in particular at a time when we see an unprecedented interdependence between the peoples of the world,” he pointed out.

The Crown Prince reaffirmed the importance of knowing that every country has its own different values and must be respected. He cited an example in this regard, saying, in the event that the United States of America will deal only with countries that share the same values and principles 100 percent, then it will have no countries to deal with it except NATO.

The Crown Prince underscored the need for peaceful coexistence among various countries and peoples despite the differences that exist among them in their day-to-day life.
#Jamal Khashoggi  #Afghanistan  #Joe Biden
Add Comment