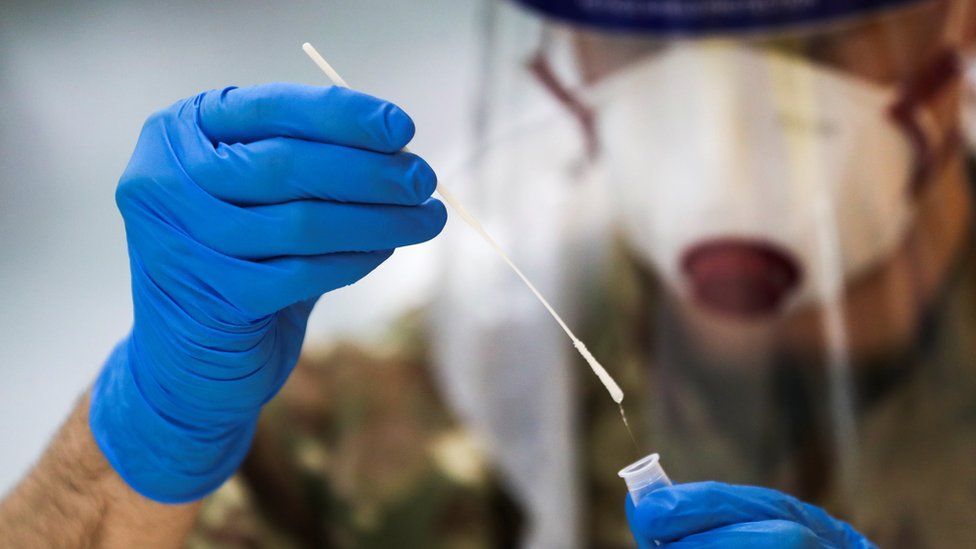 PCR tests for travel have become "a predictable Covid rip-off", says the former chairman of the Competition and Markets Authority, Lord Tyrie.

Lord Tyrie said the competition regulator had been "too slow to react" to complaints about testing providers.

Holidaymakers have objected to high prices and poor service from many of the 400-plus test firms listed on the government's website.

Tests cost about £75 on average, but prices can reach hundreds.

Lord Tyrie told the BBC that the CMA "could and should have been better prepared".

"It should either be acting already directly using existing powers. Or if deemed inadequate for the job, it should be advising the government on how to obtain a quick remedy, whether by legislation or by other means," he said.

"This advice should already be with the government."

Lord Tyrie left the competition watchdog last summer after two years in the post, suggesting the role prevented him leading a more aggressive campaign for change.

He added: "The CMA acted much more quickly to quell price-gouging on hand sanitiser and other Covid-related products 18 months ago. Far from building on this success, boldness appears to have taken a back seat."

Lord Tyrie reflected that "the CMA is full of able and highly motivated people, keen to tackle detriment like this".

"Their energies need to be released from an excess of caution at the highest levels," he added.

At the weekend, the cost of NHS coronavirus tests for international arrivals to the UK was reduced. Test and Trace tests were cut from £88 to £68 for people arriving from green-listed countries, as well as for those coming from amber-listed countries who are fully vaccinated.

Meanwhile, the price of two tests for amber arrivals who have not had both jabs has been cut from £170 to £136.

It is understood the price cut is an attempt to drive down the cost across the market, so other operators will follow.

Criticism of the government's decision to implement PCR Covid testing for all UK arrivals has been significant from the travel sector.

Last week, major airports including the Manchester Airport Group and Gatwick Airport, along with tour operator Tui, cited the testing policy as a major barrier to travel restarting and the industry recovering.

The government said its top priority was to protect public health and it continued to work with industry to help them navigate this difficult period.

Lord Tyrie said that the slow response of the CMA was likely to mean it was too late to offer a full remedy to the market before the peak holiday season comes to a close and people return to work and school in September.

But the CMA said: "These comments are inaccurate."

The watchdog said it gave advice to Department of Health and Social Care officials about the PCR testing market in April and "we gave further advice to the secretary of state last week".

A spokesperson for the CMA said: "We continue to work closely with Department of Health and Social Care in reviewing the market and, as we have made clear, we will not hesitate to take enforcement action ourselves if there are breaches of consumer law.

"Since the start of the pandemic, the CMA has secured hundreds of millions of pounds in refunds for people who have been treated unfairly, in sectors including holiday accommodation and package travel."