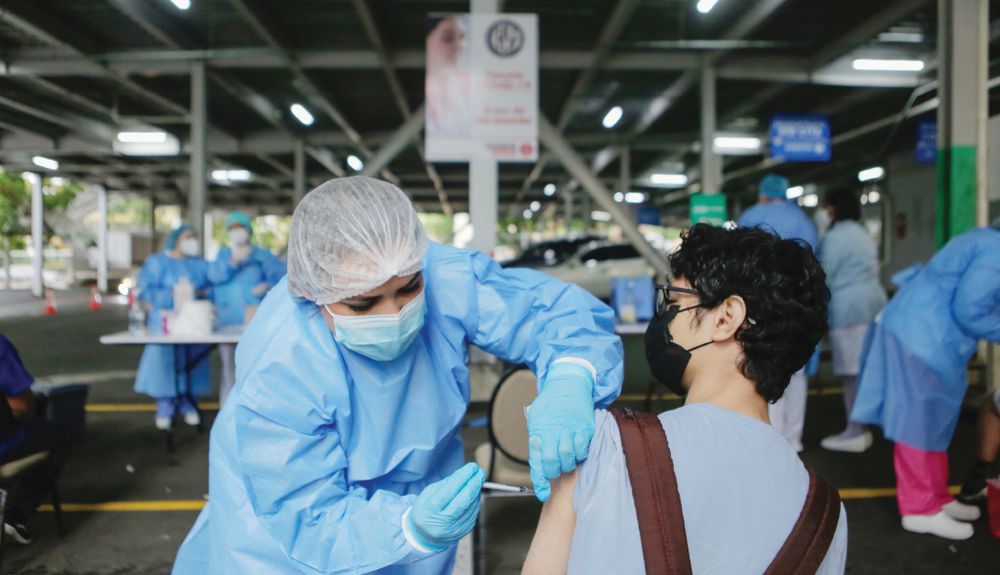 Regarding deaths, there were an average of 6 deaths per day; the week before it was 10.

The Minister of Health, Luis Francisco Sucre, stressed yesterday that in the coming months they will increase shipments of vaccines, and that the goal is to have that herd immunity by November and December.

While the dean of the Faculty of Medicine, Enrique Mendoza, pointed out that we must educate the population that does not want to be vaccinated, before establishing coercive measures.

‘The answer is to educate, not coercive measures’: Mendoza


A month before the immunization process against Covid-19 began in the country, the World Health Organization (WHO) issued its criteria on the application of the vaccine: it should not be mandatory.

The experts of the international organization stated that people should have at their disposal all the information about vaccines to protect themselves from Covid-19 and have the freedom to make a decision on whether to immunize or not.

“We have to convince and persuade people and talk to them about this. There are specific circumstances in which governments will have to enforce these vaccine requirements, but all of us who work in public health would like to prevent this from becoming a general means of getting people immunized. We will be much better off presenting people with the data, the benefits and letting them decide for themselves, "said WHO emergency director Michael Ryan.

In Panama, vaccination is voluntary, although this week the President of the Republic, Laurentino Cortizo, issued a warning which suggests that the vaccine could be mandatory for public servants.

"The obligation of all officials is to get vaccinated," he said, while noting that he is "analyzing" the possibility that officials who are not vaccinated "go home without pay."

What Cortizo pointed out occurs in other countries, such as Canada, or cities in the United States, such as New York. For example, the Canadian government announced Friday that all federal officials will need to be vaccinated against Covid-19, amid a fourth wave of the pandemic, while in the United States, New York State also recently reported mandatory vaccination of their officials or undergo a test every week due to growing concern about the Delta variant.

But what do medical specialists in Panama think?


Enrique Mendoza, dean of the Faculty of Medicine at the University of Panama, stressed yesterday that the debate is difficult and complex on how to balance the welfare, health and safety of the population, respecting individual rights. "No one has the correct answer to that debate," he pointed out.

In Mendoza's words, a good part of the Panamanian population has responded by getting vaccinated; The rejection of vaccines is not comparable to what exists in other countries.

In this context, he stated that the Ministry of Health (Minsa) must present clear figures of how many Panamanians have rejected the vaccine, since there is only data on those vaccinated.

Statistics from the Minsa specify that at least 58% of the population has received at least one dose, which is equivalent to almost 2.5 million people. 20% have completed the immunization cycle, which means they received both doses.

In Mendoza's opinion, coercive measures are not understood if it is not demonstrated that there is a problem on the subject of vaccines.

His message is that the emphasis should be on educating people who refuse vaccination.

“You have to understand that the Panamanian has been living a unique stress situation for 18 months in 103 years. Many have lost family members, have fallen ill, have lost their jobs and fear losing their individual rights. The rejection of vaccination is an expression of illiteracy in health. The answer is to educate, not coercive measures, ”he added.

However, the public health specialist, Jorge Luis Prosperi, considered that immunization should be mandatory, that is, that people accept the vaccine.

“You cannot do nothing and I understand that the position of the WHO is the politically correct one. My position is that it should be mandatory, because with vaccines we save more lives, ”he said.

He added that if as a country we do not have 80% or 90% coverage against Covid-19, we will not control the epidemic and the population will continue to die.

While the former Vice Minister of Health, Carlos Abadía, argued that the application of the vaccine should not be mandatory, but should be taken into account for certain requirements or activities.

"There is the right of the person not to be vaccinated, but when that right affects that of the vaccinated, then it is necessary to analyze the issue," said Abadía.

He used the yellow fever vaccine as an example, which is not mandatory, but you need to enter Brazil. The doctor even stressed that when more than 50% of the country's people have received their two doses, the vaccine could be a requirement to enter businesses, such as restaurants.

At the moment, the authorities of the Ministry of Health are trying to buy time and seek to accelerate vaccination in the presence of the Delta variant in six provinces. The goal is to apply two doses to 85% of the population in December.

Until yesterday, a total of 3.2 million doses had been applied. The challenge for health authorities is to apply 6 million doses in October and 7.3 million in December.