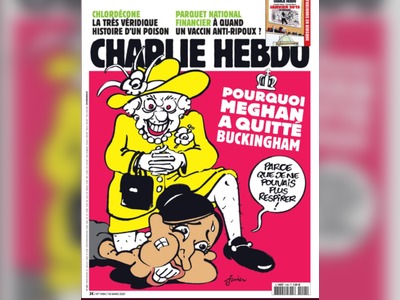 The British double standards and hypocrisy at its best: Charlie Hebdo - the French satirical weekly magazine that the British protected it’s so called free speech to insult prophet Muhammad - has suddenly come under fire for a cover which insulting a much less important historical figure, the English Queen kneeling on Meghan’s neck in a sick parody of George Floyd’s death.

We can all agree that this last one is not really a satire, as racism is what made the British monarch a monarchy to begin with, but Britain cannot protect free speech when it’s insulting others and play their regular fake surprise when people do to them what they are happily doing to others.

Giving to charity a bit of the huge fortune gained by selling slaves in America and smuggling drugs to China is very nice for the future but not enough to forget past crimes against humanity.

This double-standards-playbook can work among old-fashion-brain-washed British subjects but not among any modern people.

The only right way for the British royal family to prove that they are no longer racists is to put their hand into their pocket and pay the descendants of their slavery victims compensation.

It’s not enough to declare “I am not a racist”. The people who’s family got so rich by enslaving others should prove they are not as racist as their roots by paying compensation to the slavery descendants.

To talk by actions, not by words, in a culture where words always means just the opposite...
View full article

Rosalind Laing 102 days ago
Some people's idea of free speech is that they are free to say what they like, but if anyone says anything back that is an outrage: Winston Churchill according to Piers Morgan's tweet. Charlie Hebdo specialises in offensive publications. Attacking the Queen and linking Meghan's distress to George Floyd is what one would expect. Why get outraged? The British monarchy throughout my lifetime has atoned for slavery and colonialism by turning an Empire into a Commonwealth and supporting very positively their progress and achievements. And if you think they are racists after the spectacular wedding that Meghan was given by the Royals - I think you are just prejudiced. That wedding was a celebration of black religion and people.
PanaTimes
TV
Add Your News
×