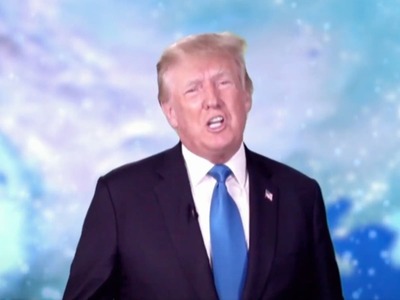 Former president Donald Trump on Tuesday claimed that the United States would come to an end in the next three years, without explaining what that might mean in practice.
View full article

Oh ya 129 days ago
The Federal Reserve will be the end of the US as we know it. When countries that buy the US bonds stop as they realize they will never get repaid or their debt is to be inflated away with every new dollar the Fed is printing they will stop buying thus just leaving the Fed to print and buy. When that happens the US dollar will follow the Venezuela Bolivia into the crapper. As Venezuela and many other countries have proven you can not print your way out of a prolbem. Venezuela has a 1 million Bolívar note that is worth abput 63 cents American.
And Claire I totally agree with you. Something I have noticed and believe to be true is Panatimes must be owned by a bunch of women as a main stream news group I have never seen so much effort into stories about the fashion of the week and fancy houses. Non of which have anything to do with Panama. As much as Don Weiner was a nutjob at least his news was about Panama for the most point

Historian 129 days ago
Trump exaggerate as usual. That’s nonsense. Despite being declined empire, USA has at list another 20-30 years to survive (and potentially can last longer, of course).

Some states might exit, some states might join to replace them (Panama, Puerto Rico), but base on th history (all the past collapsed empire), USA have much more than 3 years to survive as a strong country.

Claire Sheppard 129 days ago
Is Panatimes turning into a leftist communist rag like Newsroom Panama? I unsubscribed to Newsroom Panama and Panatimes may be next if lying articles like this continue.
PanaTimes
TV
Add Your News
×