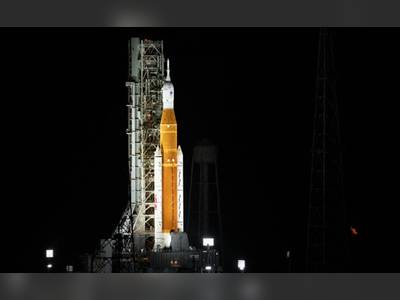 Brad 89 days ago
Correct they cannot travel past the upper limit of 350 miles above earth. 1000 miles Van Allen belts.
Space is a vaccum no atmosphere to burn man made fuels. Space is to cold and hot no know materials on earth can leave earth. No signal transmission can pass through radiation of 4,000 degrees Fahrenheit temperatures of the Van Alan Belts
Ceramic melts at 3,200 degrees no materials know to man can survive period more propaganda from the waist full government lining family members pockets.

CIA Buys News” Ulfkotte goes over how the CIA along with German Intelligence (BND) were guilty of bribing journalists to write articles that either spun the truth or were completely fictitious in order to promote a pro-western, pro-NATO bent, and that he was one of those bought journalists.

Ulfkotte finally built up the nerve to publish the book, in response to the erupting crisis in Ukraine stating

I am deeply worried about the Ukrainian crisis and the possible devastating consequences for all of Europe and all of us…I am not at all pro-Russia, but it is clear that many journalists blindly follow and publish whatever the NATO press office provides. And this type of information and reports are completely one-sided”.

“I am ashamed of it. The people I worked for knew from the get-go everything I did. And the truth must come out. It’s not just about FAZ, this is the whole system that’s corrupt all the way.”

Udo Ulfkotte has since passed away. He died January 2017, found dead in his home, it is said by a heart attack. His body was quickly after cremated and thus prevented any possibility of an autopsy occurring.

In another interview Ulfkotte stated:

The articles appeared under my name several times, but they were not my intellectual product. I was once approached by someone from German Intelligence and the CIA, who told me that I should write about Gaddafi and report how he was trying to secretly build a chemical weapons factory in Libya. I had no information on any of this, but they showed me various documents, I just had to put my name on the article. Do you think this can be called journalism? I don’t think so.”

Oh ya 90 days ago
Sending this thing up to measure how much radiation there is going through the Van Allan radiation belt as they have never sent a man through it before. If you believe they did before you drank too much government kool-aid. Stanley Kubrick was a great film maker. And remember your cell phone has more computing power that the computers back then.
PanaTimes
TV
Add Your News
Playlist Hide
0:00
0:00
Open
Close
0:00
0:00
Charlie Munger, calls for a ban on cryptocurrencies in the US, following China's lead
EU found a way to use frozen Russian funds
First generation unopened iPhone set to fetch more than $50,000 at auction.
WARNING GRAPHIC CONTENT - US Memphis Police murdering innocent Tyre Nichols
House Speaker Kevin McCarthy said he will block Reps. Adam Schiff and Eric Swalwell from serving on the House Intelligence Committee
Almost 30% of professionals say they've tried ChatGPT at work
Interpol seeks woman who ran elaborate exam cheating scam in Singapore
What is ChatGPT?
Bill Gates is ‘very optimistic’ about the future: ‘Better to be born 20 years from now...than any time in the past’
Tesla reported record profits and record revenues for 2022
Germany confirms it will provide Ukraine with Leopard 2 tanks
Prince Andrew and Virginia Giuffre Photo Is Fake: Ghislaine Maxwell
Opinion | Israel’s Supreme Court Claims a Veto on Democracy
Moonwalker Buzz Aldrin Gets Married On His 93rd Birthday
Who’s Threatening Israeli Democracy?
Federal Reserve Probes Goldman’s Consumer Business
China's first population drop in six decades
Microsoft is finalising plans to become the latest technology giant to reduce its workforce during a global economic slowdown
Tesla slashes prices globally by as much as 20 percent
1.4 Million Copies Of Prince Harry's Memoir 'Spare' Sold On 1st Day In UK
After Failing To Pay Office Rent, Twitter May Sell User Names
Lisa Marie Presley, singer and daughter of Elvis, dies aged 54
FIFA president questioned by prosecutors
Britain's Sunak breaks silence and admits using private healthcare
Hype and backlash as Harry's memoir goes on sale. Unnamed royal source says prince 'kidnapped by cult of psychotherapy and Meghan'
Saudi Arabia set to overtake India as fastest-growing major economy this year
Google and Facebook’s dominance in digital ads challenged by rapid ascent of Amazon and TikTok
FTX fraud investigators are digging deeper into Sam Bankman-Fried's inner circle – and reportedly have ex-engineer Nishad Singh in their sights
TikTok CEO Plans to Meet European Union Regulators
France has banned the online sale of paracetamol until February, citing ongoing supply issues
Japan reportedly to give families 1 million yen per child to move out of Tokyo
Will Canada ever become a real democracy?
Hong Kong property brokerages slash payrolls in choppy market
U.S. Moves to Seize Robinhood Shares, Silvergate Accounts Tied to FTX
Effect of EU sanctions on Moscow is ‘less than zero’ – Belgian MEP
Coinbase to Pay $100 Million in Settlement With New York Regulator
FTX assets worth $3.5bn held by Bahamas securities regulator
A Republican congressman-elect is under investigation in New York after he admitted he lied about his education and work experience.
Brazilian football legend Pele, arguably the greatest player ever, has died at the age of 82.
Hong Kong to scrap almost all its Covid rules
EU calls screening of travellers from China unjustified
US imposes Covid testing for visitors from China
Ukraine President Volodymyr Zelenskyy Addresses Joint Session of Congress - FULL SPEECH
Where is Rishi? Chancellor Jeremy Hunt's excuses about the UK's economic challenges just don't make sense
Former FTX CEO Bankman-Fried finally arrested in Bahamas after U.S. files charges
Corruption works: House Financial Services Chair Waters doesn't plan to subpoena her donor, Sam Bankman-Fried, to testify at hearing on FTX collapse
Ronaldo's new contract...
Prince William's godmother resigns honorary royal role after exposing her/their racism
Tax fraud verdict again exposes illusion of Trump the master businessman
Tax fraud verdict again exposes illusion of Trump the master businessman.
×