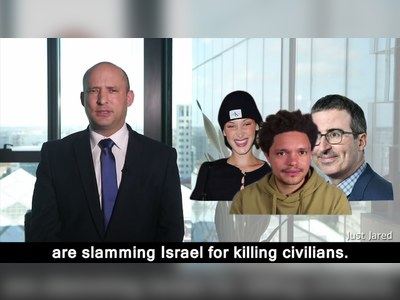 The Israeli-Palestinian conflict is not between good people and bad people, but between two groups of people whose bad luck has pushed them into a situation where both sides seem to have no choice but to choose between killing or being killed. Despair, rage, revenge and a one-sided sense of justice prevent both sides from choosing the natural option of living and letting live.
View full article

Alfred 122 days ago
Imagine the controversy if a leading/former politician were to
try and justify the killing of Jewish civilians.

Hitchcock 122 days ago
No need to imagine. It is controversial indeed, to justify killing anybody regardless their race.

Hitchcock 122 days ago
Alfred:
“Those responsible for the occupying Palestine” (That was United nation in 1948, remember?) “and their supporters” (33 states voted for, only 13 against it) “will have to bear the burden of History recording their being responsible for the Palestinian Holocaust” (here is your big mistake. The only reason that there is currently a conflict, is that the Jews did not “commit Holocaust” to the Palestinians, as USA, Canada, Australia and New Zeland did to their natives. This is a tragic situation of two nations that has left with no other choice but to do bad things to each other. it is wrong, and many things could and should be done totally different, but Holocaust Is not and even not 1% of it is not. Israel is handling this crisis wrong, and Hamas helping them to handle it even worse. The solution is not to blame, but to contain. On both sides.

Alfred 122 days ago
"Descendants of the same father" seems therefore they are both Semites, Wait that wont work as it would destroy the anti-Semite propaganda.

Hitchcock 122 days ago
I don’t care about the propaganda. There is no argument that Jewish, Muslims and Christians are Arabs, by origin. Blond Jesus with blue eyes is right only to the stupids that believe that God and not a neighbor screwed his mother.

Hitchcock 123 days ago
No Alfred. You are wrong. We can argue if what Mr. Benet said is right or wrong, but it is absolutely wrong to use disagreement with whatever he said to justify or even just tolerate anti-semitism.

Mr. Benet is not speaking in the name of the Jews or Judaism. He is a representative of the Israel Government. Or in fact -as of today- he is part of the minority of the Israeli... opposition.

Many Jewish people, inside Israel and around the world, opposed loud and clear the operation in Gaza. So the dispute is not with or against “Jews”, therefore nothing in it to justify antisemitism.

Some Jewish, as well as Christians and Muslims by the way, think that Israel has the right to defend themselves aggressively, and some not.

It has nothing to do with semitism or antisemitism. Many Christians supports the Israeli operations in Gaza. And that doesn’t justify anti Christianity too.

So it’s not a “Jewish” issue. It’s an “Israeli” issue. Do not mix the two, nor generalize blame.

Israel is not “The” Jewish state (America has more Jewish than Israel, and millions are in Europe, Canada and Australia).

It’s a democratic-Jewish state where, believe it or not, an Islamic party got more votes in the last election than Mr. Benet. So like it or not, the voters who will decide who will be the Israel’s next prime minister it’s the Israeli-Muslim voters, not Mr. Benet who is supported by only 300,000 voters (3.5% of all Israeli citizens and 1.5% of all the Jews in the world).

Personally I think that Mr. Benet is wrong. It’s wrong to bomb terrorist among civilians. But this is my opinion in my comfort luxury and safe zone. If they would even think to shoot at my home or harm my children’s, my opinion will be that Mr. Benet is too soft and the Israeli reaction is too gentle. c'est la vie, as I wrote in the article...

Alfred 123 days ago
What a horrible thing to say, no wonder the rise in ant-Semitism is reaching unprecedented heights.
PanaTimes
TV
Add Your News
×