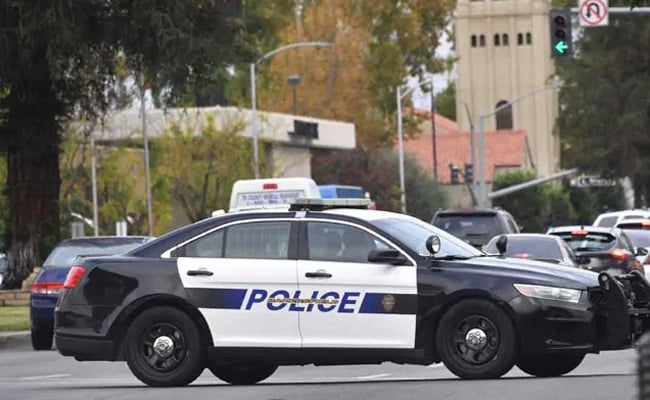 22-year-old Anderson Lee Aldrich used a long rifle at the club where partygoers were marking Transgender Day of Remembrance, which pays tribute to trans people targeted in violent attacks.
The gunman who opened fire inside an LGBTQ Colorado nightclub, killing at least five people, was stopped by two "heroic" people inside the club, police told a press conference Sunday.

They identified the suspect as 22-year-old Anderson Lee Aldrich, and said he had used a long rifle at the club, where partygoers were apparently marking Transgender Day of Remembrance, which pays tribute to trans people targeted in violent attacks.

Eighteen people were wounded in the shooting shortly before midnight, police said, adding that an unspecified number of the wounded remained in critical condition. They said at least one other firearm was found at the club.

The shooting is the latest in a long history of attacks on LGBTQ venues in the United States, the deadliest of which claimed 49 lives at a nightclub in Orlando, Florida, in 2016.

He added, "At least two heroic people inside the club confronted and fought with the suspect and were able to stop the suspect from continuing to kill and harm others."

The authorities said the suspect was being treated at a local hospital but they released no other information about him, noting that local, state and federal authorities, including the FBI, are investigating.

But a man with the same name was arrested on June 18, 2021, aged 21 after his mother said he had threatened to hurt her with a homemade bomb or "multiple weapons," according to a news release at the time from the El Paso County Sheriff's Office.

The Colorado Springs neighborhood around that man's house was evacuated after he initially refused to surrender. No explosive devices were found, the release said.


Police spokeswoman Pamela Castro said Sunday that police received an initial call about an active shooting in the club at 11:56 pm. She said a first officer arrived within four minutes, and that the suspect had been subdued just two minutes later.

"Club Q is a safe haven for our LGBTQ citizens," Chief Vasquez said. "I'm so terribly saddened and heartbroken."

Club Q said on Facebook that it was "devastated by the senseless attack on our community," adding, "We thank the quick reactions of heroic customers that subdued the gunman and ended this hate attack."

Authorities said Sunday that the shooting had not yet been officially classified as a hate crime but that first-degree murder charges were certain to be filed.

District attorney Michael Allen, speaking at the news conference, said that acts of violence intended to strike fear in "specific communities...will not be tolerated."

Governor Jared Polis, who in 2018 became the first openly gay man elected as a US governor, called the shooting "horrific, sickening and devastating," adding that "Colorado stands with our LGTBQ Community and everyone impacted by this tragedy."

Messages of support poured in by the hundreds to the club's Facebook page, some from as far away as Sweden, Britain, New Zealand, Germany and Australia.

'Events we train for'


Authorities could not immediately say how many people were in the popular club at the time.

They said 39 police officers and 34 firefighters were dispatched to the scene.

"Unfortunately," Colorado Springs Fire Department spokesperson Mike Smaldino said, "these are events we do train for, as far as what we call a 'mass casualty,' so that is why we had such a big response."

He added that some ambulances had to carry two or three victims to nearby hospitals.

Ms Castro said that some of the wounded were hurt not by gunfire but were injured while fleeing.


On June 12, 2016, a gunman opened fire inside the Pulse nightclub in Orlando, killing 49 people and wounding more than 50 in what was then the deadliest mass shooting in modern US history.

US President Joe Biden marked the fifth anniversary of the Orlando shooting last year, taking the rare step of saying he would designate the club as a national memorial.

Gun violence is a major problem in the United States, where more than 600 mass shootings have occurred so far in 2022, according to the Gun Violence Archive website.

The archive defines a mass shooting as a single incident in which at least four people are wounded or killed.

Mass shootings have repeatedly reignited debate on gun control, a hot-button issue in the country, though little headway has been made in Congress on calls for reform.
#Joe Biden  #Facebook
Add Comment