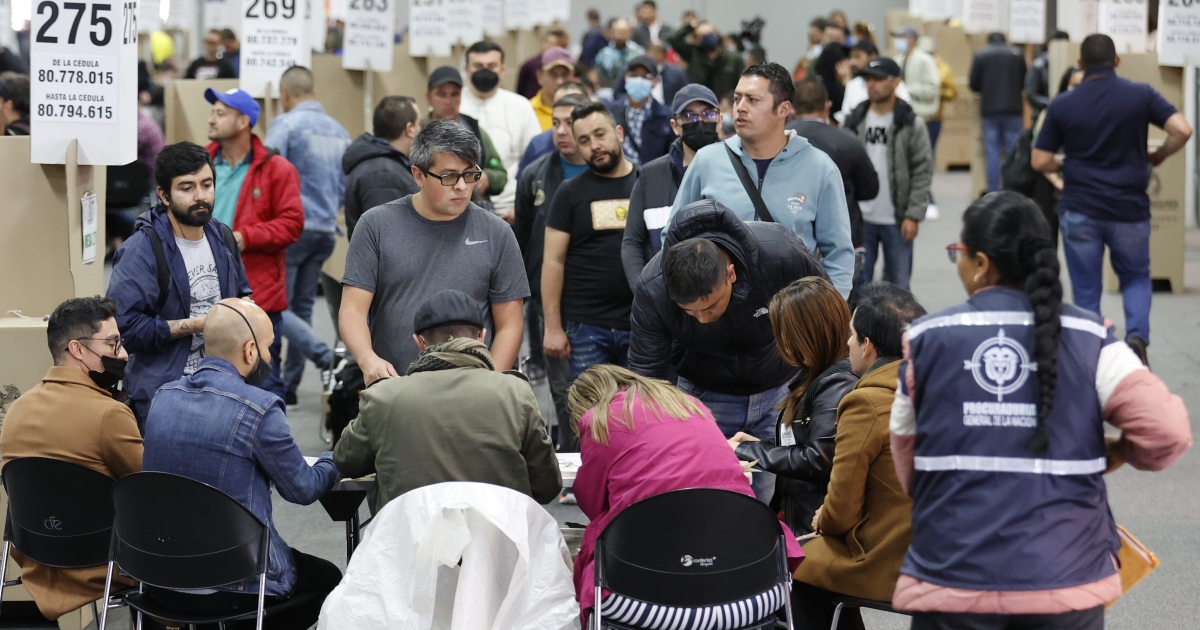 Leftist candidate Gustavo Petro was leading in polls and well on his way to become Colombia’s next president.

Colombians have voted in a polarised election marked by deep grievances and distrust, coming on the heels of a quarantine that has deepened divisions and a protest movement last year that inspired the country’s youth to take to the streets.

Voters trickled into Saint Thomas University, one of Bogotá’s 901 voting stations, on a drizzly Sunday morning to cast their votes.

Leidy Cordoba Ruiz, a 49-year-old social worker and mother of two, stood outside under an umbrella after casting her vote. She said she felt optimistic, but also uncertain.

“Hopefully the country will change,” she said.

“That this time there will be a real change.”

The election follows a heated campaign that has come to represent a divided country plagued by economic, social and racial inequality.

Colombia’s electorate is younger than ever and voters are disaffected by lack of opportunity and deepening inequality, as well as rising violence from armed groups that many attribute to a shoddy implementation of the country’s 2016 peace agreement.

This discontent propelled anti-government demonstrations that swept the country last year, and was amplified by the government’s brutal response.

Colombia’s current conservative president, Ivan Duque, is the country’s least popular head of state on record. This is due, in part, to his handling of the protests.

Leftist candidate Gustavo Petro, the former mayor of Bogotá and M-19 guerrilla leader, is currently leading in the polls at 35.8 percent. With his proposals to boost social investment, halt new oil exploration, and dismantle the notorious riot police known as ESMAD, Petro is well on his way to become Colombia’s first left-wing president.

His running mate, Afro-Colombian environmental activist Francia Marquez, who placed third overall in the presidential primaries, has her own devoted following and has galvanised the election with her promise to fight for Colombia’s “nobodies”.

Cordoba Ruiz said she cast her vote for Petro because she sees him as the candidate who “has the most affinity with the poor, that makes the most proposals for disadvantaged people”.

Growing up in the western department of Chocó, an Afro-majority region that has long suffered from violence due to armed groups and lack of public services, Cordoba Ruiz has seen the scarcity of opportunities in Colombia up-close.

She came to Bogotá 30 years ago in search of work, yet she still sees her two adult sons struggling to find well-paying jobs. She said she is also hopeful that Márquez, who knows the struggles of being an Afro-descendant woman, will “reach out a little more to our department”.

Unless Petro reaches the 50-percent threshold to stave off a second round of elections, Colombia is likely to hold a runoff on June 19 in which the top two candidates will face off.

Conservative establishment candidate Federico ‘Fico’ Gutierrez has been trailing Petro in second place for months, but populist wildcard Rodolfo Hernandez saw a surge in recent weeks that puts him neck and neck with Gutierrez for second place.

Recent polls put Gutierrez at 20.8 percent and Hernandez at 19.1 percent. 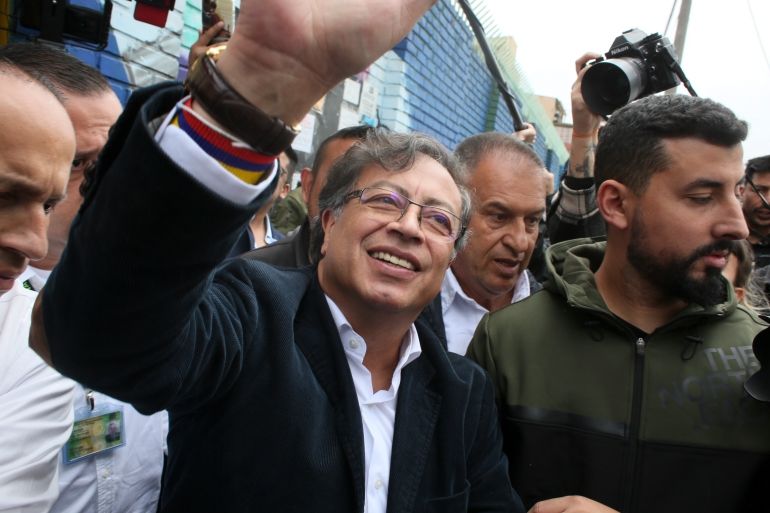 Gustavo Petro, presidential candidate with the Historical Pact coalition, leaves a polling station after voting during presidential elections in Bogota, Colombia on May 29, 2022

Gutierrez, the former mayor of Medellín, Colombia’s second-largest city, has much of the same voter base as President Duque’s right-wing voters, as well as those who fear the socialist excesses of a Petro presidency.

As police monitored the blocked-off streets around the Corferias convention centre in central Bogotá, queueing voters were directed by poll station workers wearing “INFOVOTANTES” T-shirts at what was one of the city’s largest voting centres.

Cristina Camacho, a 48-year-old business administrator, waited for her husband before she got in line at the polls to vote for Gutierrez.

Camacho commended the outgoing administration for its fight against narco-trafficking and paramilitarism and said “it is in our best interest to have a government that continues to fight for the same thing.”

She admires Gutierrez’s record as the mayor of Medellín, and sees him as a candidate that will not take Colombia in the downward direction she sees neighbouring countries with leftist governments going, such as Venezuela – a possibility she fears with a Petro presidency.

“I don’t want my nation to have to emigrate,” she said.

Hernandez, the businessman and former mayor of the northern mid-sized city of Bucaramanga, has seen an unexpected boost in popularity in recent weeks. His anti-corruption platform and brusque comments appeal to many Colombians who are dissatisfied with the status quo.

At the same time, this election has been marked by threats of violence and growing distrust in the country’s institutions.

Colombia’s election body, the national registrar, initially failed to count more than one million votes in March’s congressional elections and much of Monday’s presidential debate focused on the candidates’ concerns over electoral fraud.

Analysts fear this distrust could lead candidates to contest the outcome of the election, potentially leading to violence.

Cordoba Ruiz, the social worker, said she hopes that the young people who have been empowered in the past few years will have an effect on this election.

“This time young people have become more aware,” she said.

“They are more empowered and I think this is going to be positive.”