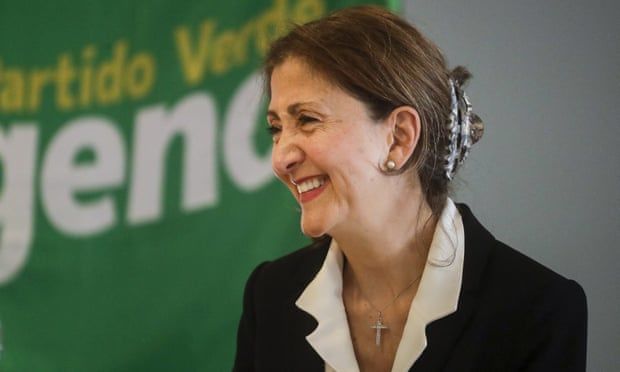 Ingrid Betancourt will enter a crowded field as a candidate for the Green Oxygen party in May’s election
Ingrid Betancourt, the Colombian politician who was held as a hostage for six years by Colombia’s largest guerrilla group before a dramatic rescue, has announced that she will be running for her country’s presidency.

The news comes almost two decades after Betancourt was kidnapped by the Revolutionary Armed Forces of Colombia while also campaigning for the country’s top office for the Green Oxygen party, a movement she founded while she was a congresswoman.

“Today I am here to finish off what I started with many of you in 2002,” Betancourt saidon Tuesday. “I am here to claim the rights of 51 million Colombians who are not finding justice, because we live in a system designed to reward criminals.”

Betancourt spent six years in guerrilla camps deep in the Amazon jungle, where sometimes rebel fighters would tie her to a tree with metal chains to prevent her from escaping. Her proof of life videos, in which she asked officials to investigate the circumstances that led to her own kidnapping, and then pleaded with the government to resume peace talks with the Farc rebels were aired widely in Colombia and abroad.

The politician became a symbol of international campaigns seeking peace talks in Colombia and the liberation of Farc hostages. But her time in captivity ended in 2008 through a military operation, where Colombian soldiers disguised as humanitarian workers snatched Betancourt and several other hostages from the Farc without firing a single bullet.

Betancourt withdrew from public life after being freed spending much of her time with family in France.

But she returned to Colombia’s political scene last year as the country prepared for elections that will be held in May. While announcing her run for the presidency Betancourt said she would fight to end impunity for corrupt politicians as well as the economic disparity that has long afflicted Colombia, where protests against inequality shook up local politics last year.

“While our captors deprived us of food, mafiosi and politicians continued to steal and waste our resources without caring for children who go without breakfast here in Colombia.”

Betancourt will be once again running as a candidate for the Green Oxygen party, which is now part of a coalition of centrist political movements that will hold a primary in March.

In the primary, Betancourt will have to compete against younger candidates who are less known internationally, but have been more recently involved in Colombian politics.

Sergio Guzmán, a political risk analyst in Bogotá, said that with more than a dozen candidates still competing for Colombia’s presidency and just two months left until the primaries, it will be difficult for Betancourt to make an impact.

“She represents reconciliation” and other issues that were important during previous elections, like the need for Colombia’s government to make peace with armed groups, Guzmán said. But those are not the main issues that voters are concerned with in this election, according to polls.

“The main feeling now among voters is one of frustration with a system that does not provide opportunities” Guzmán said. “And there are other candidates who have been doing a good job tapping into that feeling.”

Polls are currently led by Gustavo Petro, a leftist former mayor of Bogotá who backed protests against proposed tax hikes and inequality last year, and said he will stop granting exploration contracts to oil companies as part of a plan to decrease Colombia’s dependency on oil revenues.

The Farc, which kidnapped Ingrid Betancourt back in 2002 and long financed their operations with drug money, signed a peace deal with Colombia’s government in 2016.

But rebel groups like the National Liberation Army and Farc holdout groups who refused to sign the peace deal continue to fight over drug trafficking routes, illegal mines and other assets in rural pockets of the country where homicides and the forced displacement of civilians have increased.
Add Comment